I Present to You: The Wheel. Seen it. 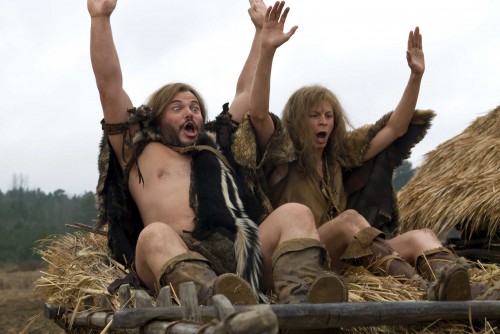 Parodies have become cliché these days. Let’s just say, the Wayans have ruined the fun for many of us. They cast C-list stars to act out amateur writing which is based it on other subpar films. I wouldn’t necessarily call their concept as brilliant.

If you’re going to do a parody, you have to do it right with the proper necessities. I would think that creating an unforgettable comedy would be possible by having one of the best comedic writers in the industry along with casting a standout duo. “Year One” has all the elements necessary to be a potential classic. Now, throw in a foundation to base the parody on and it should be successful. Keenan, eat your heart out.

A parody based on biblical stories hadn’t been done yet. The last time a biblical story hit the big screen was Dan Brown’s “The Da Vinci Code” which only caused hysteria among the faithful. “The Passion” didn’t crack any laughs, either. Unlike other films that are considered blasphemous with the Christian faith, not much controversy has stirred in church (last I checked) due to the Old Testament depictions in “Year One”. After all, how threatening could Jack Black and Michael Cera be when they get placed in some of the oldest yet most popular stories ever told?

The story is based on Zed (Jack Black) and Oh (Michael Cerra) who are hunter-gatherers in a village. Zed is a terrible hunter who can’t gather, while Oh is an intelligent and fragile gatherer and maker. The two are friends in a tribe that isolates them from the pack due to Zed’s ignorant self-righteous power and Oh’s hesitant weakness. Both are inadequate in their own right and in love with women they can’t have. Zed feels unsatisfied with the primitive life; he decides to eat form the “Forbidden Tree” while disregarding Oh’s advice to avoid the urge. Zed claims he is endowed with all this knowledge and has a mind full of questions, not answers.

After being caught by a tribesman, Zed gets tangled in a mess and gets himself banished from the village. In his freak accident, he gets his only friend, Oh, to tag along for the ride. The two venture on a journey to the other side of the mountain to examine their lives and expand what they know. Throughout their expedition, they encounter Adam and Eve, Cain and Abel, and a few other characters.

Somehow, their adventure lands Zed in the position to think that he is the chosen one. Meanwhile, poor Oh is dragging along wondering why he ever left the village to begin with. They travel through Sodom stumbling upon a fake high priest (Oliver Platt) and have the potential of reconciling their reputations among their tribe by rescuing them from slavery.

As the story goes along, Oh’s wimpiness can get old, as does Zed’s misguided ways. Both Jack Black and Michael Cera seemed to play their own characters while walking through this biblical blast from the past. The actors did their job, it was the script that held them back.

The writer and director, Harold Ramis, has created epic comedic masterpieces in the past such “GhostBusters”, “Groundhog Day”, and “Analyze This”. Taking a glance on his premise for “Year One”, one would assume that the writing for this film would be remarkable; unfortunately, it wasn’t. I think it could’ve been better.

The story structure was scattered and I wondered if the movie would ever arrive at its climax. It seemed as if Ramis relied heavily on his talented cast for improv due to the lack of quality writing. He had everything in his hands and I’m wondering where the magic went.

The only unforgettable scenes in the movie had to do with eating poop or peeing on your head upside. These shouldn’t be the funniest parts of the movie. I don’t think such raunchy extremes were necessary to create comedy. I figure high school kids or college frat boys will be quoting this movie in no time.

The collaboration on “Year One” did execute to make a decent laugh out loud movie. The duo and the rest of the cast also made for a good supplement in Ramis’ story. Throughout the movie, current perspectives were given on past beliefs.  The combination did create a controversial, yet humorous blend for this paradoxical comedy.