Do Kids Even Go to Arcades? 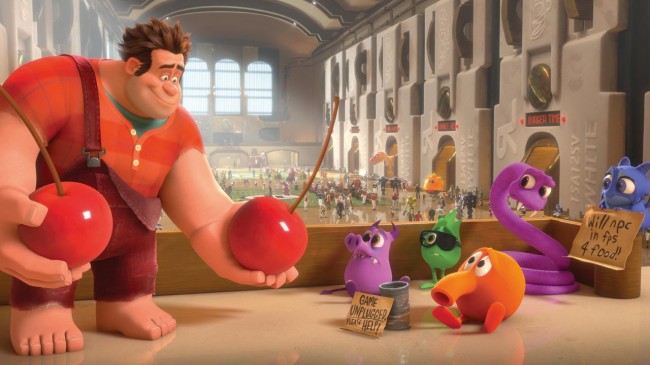 Director Rich Moore latches on to 8-bit nostalgia with Disney’s perfunctory holiday CG offering Wreck-It Ralph. The eponymous Ralph (John C. Reilly), who lives and works as the villain inside a Donkey Kong/Rampage hybrid arcade game named Fix-It Felix Jr., decides during the game’s twentieth anniversary that he no longer wants to be treated like an outcast. In order to win the hearts and minds of his fellow Fix-It Felix Jr. characters, Ralph sets off to win a medal in another arcade game to prove he can be a hero. Wreck-It Ralph cashes in a chunk of its production budget with the number of video game characters licensed for cameos (notably absent is a certain Italian plumber and a barrel-throwing ape) as Ralph travels to the center of the arcade’s power grid. The film misses a major opportunity to explore the respective worlds and personalities of these video game characters and, instead, drops Ralph in the middle of a Halo parody in order to earn his hero medal.

Clumsiness ensues when Ralph triggers an outbreak of alien bugs which threaten to infect other games in the arcade. Ralph escapes into a Super Mario Kart-esque racing game where a glitchy young driver, Vanellope (Sarah Silverman), uses Ralph’s medal as the entry fee for a race that will make her a selectable character once again. Will Ralph be able to help Vanellope win the race so that he can get his medal back and impress the characters in his game before the bugs ruin everything?

Wreck-It Ralph sidesteps any questions of autonomy as the characters seem perfectly content living within a video game while being controlled by players. Despite the subtle nod to Walter Day of Twin Galaxies Arcade (featured in The King of Kong), the film also disregards the hardships of running an arcade filled with retro video games in an age of Xbox Live Arcade. Instead, Wreck-It Ralph addresses the theme of acceptance among one’s peer group and the outlandish measures one must take to acquire it. Furthermore, Ralph’s decision to become accepted by his peers after two decades of villainy is unmotivated while the medal as a means to earning peer recognition remains unexplained. Once Ralph manages to become a hero while acting destructive, confused children everywhere who attempt to apply the themes of this film in real life will be sent to time out.