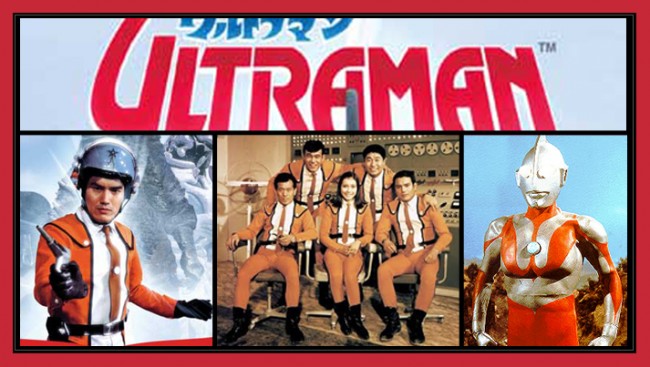 I was thrilled this weekend when I glanced through a $3.99 movie bin at Albertson’s and pulled out the most random inclusion I could find: Volume One of the 1966-7 Japanese TV show ULTRAMAN: A SPECIAL EFFECTS FANTASY SERIES.  One look at the cover art and I knew I’d be in for a treat.

A quick glance on Wikipedia confirmed my excitement.  It has some of the same creators as Godzilla.  The monsters all have names like Greenmons, Alien Zarab, and The Under the Ground Human. Awesome!

This is going to be a recurring feature.  Every few weeks I will watch two or three more episodes and share the magic that is Ultraman Volume One.

I experienced immediate confusion during the opening credits.  It turned out that I had the English dubbing AND the English subtitling on at the same time.  And they didn’t match!  AT ALL!  Which leads me to question what the hell is going on in this show at any given moment, because who knows whether either translation is accurate.

English (subtitles): The capsule in hand, flashes sparkling.  It’s a shine of one million watts.  From the Land of Light, for our sakes, he has come, our Ultraman!

My brain was going to explode from simultaneously trying to grasp both translations at once (this diversion continued past the theme song, and into ordinary dialogue), so upon realizing my error I converted entirely to subtitles.

The first episode is pretty standard introductory stuff.  Some kids are singing at a campground when a big blue bubble full of lightning descends from the sky and sinks into their lake.  Meanwhile, Hayata, member of the Scientific Special Search Party (more often called the Science Patrol, or sometimes the United Nations Scientific Investigation Agency) is flying around in his VTOL jet when a bright red bubble crashes into him and sends him flaming to the ground.

It turns out the red bubble was the travelcraft of an unnamed alien from M7B.  He is silver, with tight red shorts and collar and a huge zipper up his back.  He came to take away the devilish space monster Bemular, but Bemular ran away.  To apologize for the inconvenience of killing Hayata (such a polite alien!), he offers to merge their life forces and bring them both back to life.  He gives Hayata a special Beta Capsule via which he can summon the alien whenever he needs help.  I have a feeling he will need to use it by the end of every episode!

I have to mention I love the Science Patrol’s uniform.  Orange suits with ties and a big white helmet.  The little rocket pin on their lapel is a tiny radio with which they can call HQ, and they have round buttons that glow red when there is danger.  Don’t ask me how it works!

Captain Muramatsu is their very serious leader.  He has a huge pipe!  Akiko Fuji is the token girl.  She mostly sits in HQ managing the radio, but at one point in the first episode she flies a jet, so I know she’s not just the office girl.  There’s also a little boy named Hoshino who keeps popping up for no reason I can understand, as well as a couple of other team members who will probably develop more as the series progresses.

So naturally Bemular rises from the churning lake.  He is a Godzilla-like monster with a long neck, tiny waggling T-Rex arms, a slack jaw and herp-a-derp eyes.  The Science Patrol tries to take him out with their lightning guns, to no effect.

Hayata gets into a submarine and employs… ULTRA OPERATION NUMBER ONE!  A.K.A. he shoots Bemular in the ass.  Bemular bellows up out of the lake.  The VTOL jet shoots him in the head. He sinks back down.  Repeat.

Like any good Super Nintendo boss, this only works three times before Bemular escalates his method of attack: waving arms and blue laser breath.

Enough is enough, and Hayata uses the Beta Capsule.  He transforms into the silver alien, now as tall as the monster Bemular!  The narrator proudly declares, “He flies at Mach 5!  He is an immortal man who destroys all enemies with massive power!”

Bemular is, of course, defeated, and we get the first instance of our hero’s warcry, “SHUWATCH!”  I thought it was a bizarre subtitle, but nope, that is what he says every time he transforms and flies up into the air.  Shuwatch!

After the battle is over and Bemular has exploded, Hayata runs back to the Science Patrol, expressing awe and wonder.  Much like Clark Kent is never associated with Superman, Hayata will just happen to miss the action every time.  He also declares that since the friendly alien has no name, they will call him… ULTRAMAN! 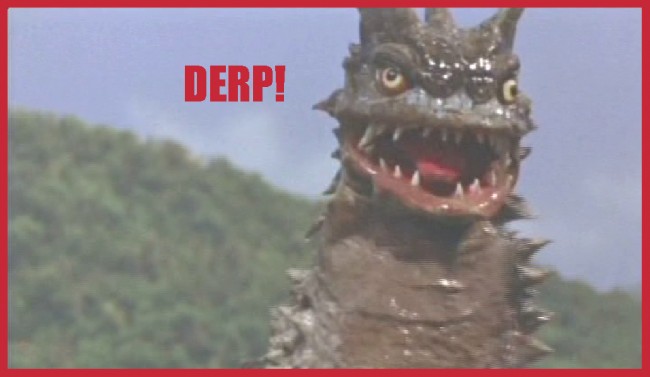 The second episode opens with one of the other Science Patrol members, Ide, walking around HQ with a black eye.  Akiko teases him about it, and he turns to the camera to ask… do WE want to know how he got the black eye?  Well, it started 38 hours ago!

Fade back, fade back, and Ide is unsuccessfully trying to go to sleep, furiously counting sheep (he is up to 12,516), while the dude on the bottom bunk snores like crazy.  An alarm goes off, and they both leap to attention.  They slide down a fireman’s pole into the main Science Patrol HQ.  I guess everybody lives there!  And they sleep in their uniforms.

Apparently a strong electric wave just came out of the Botan Mountain Science Center.  They send patrolmember Arashi out to investigate, and dear little Hoshino sneaks into the car to tag along.  Who the hell is this kid?  Where does he come from?  Why are his shorts so short?

Arashi goes to the science center, and discovers that everyone there has been frozen!  Then another derp-eyed monster appears, this one with crab hands.  Except that is a decoy for the REAL crab-hand monster, who sneaks up from behind and freezes Arashi.  It is a crab monster with laser claws, freezing power, and the ability to project copies of itself around the room.  Awesome.

The defense council (of the United Nations?  Who knows!) meets to discuss the problem.  They demand that Captain Muramatsu come up with a plan.  He is, after all, head of the Science Patrol.  He wants to talk to the monsters first, and they all laugh.  Their plan: find its spaceship and launch a nuclear attack!  They decide to get both plans ready, just in case.

Ide goes in to talk to the monster, with Hayata as his back-up (good choice!).  Crab-Hands appears and forces Ide to go upstairs, then vanishes.  It then walks up in the body of Arashi.  As it explains, it could not understand their language, so it borrowed his brain.  It further explains that they came to Earth because their star, Baltan, was blown up in a nuclear test by a crazy scientist, and they have decided to live here now.

Hayata is cool with this plan, so long as they abide by Earth law, but then the alien from Baltan announces that there are 2.3 billion of them on the invisible spaceship, and except for him they are as small as bacteria.  WELL THAT SHIT WON’T STAND!  Hayata tells them to go to Mars, but the alien goes crazy, reverts back to Crab-Hands form, transforms into a GIANT crab-hand monster, and goes on a rampage.

Back at HQ, the Captain realizes that Mars has Specium and Earth does not.  That must be the reason Crab-Hands can’t live there!  Okay, Captain!

Yadda yadda, Hayata uses the Beta Capsule, turns into Ultraman, and begins grappling with Crab-Hands.  It turns out he has a Specium Ray, what luck!  He shoots the alien down and blows it up.  He then uses his X-Ray vision to make the invisible spaceship visible.  He pushes it into outerspace, and a sudden glow in the sky indicates that Ultraman just happily committed genocide.

Everyone is unfrozen and they go back to HQ to share a laugh.  Ide realizes he never said how he got his black eye!  Oh yeah!  He came back to the base that night and finally went to sleep, snoring away loudly… but then he rolled off the top bunk and hit his face on the ground!

AHAHAHAH YOU GUYS ARE CLASSIC!!  The End! 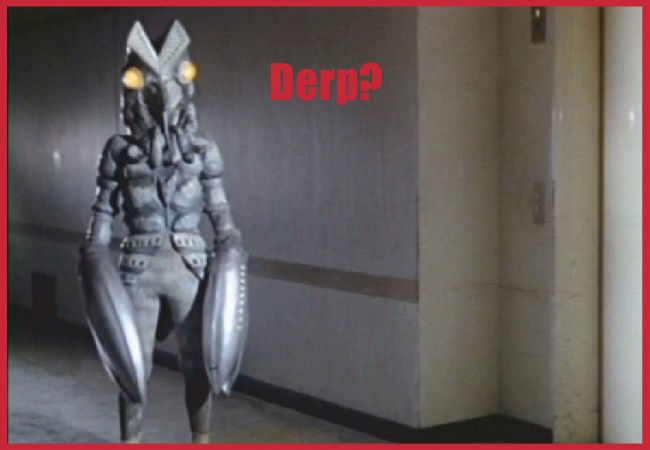