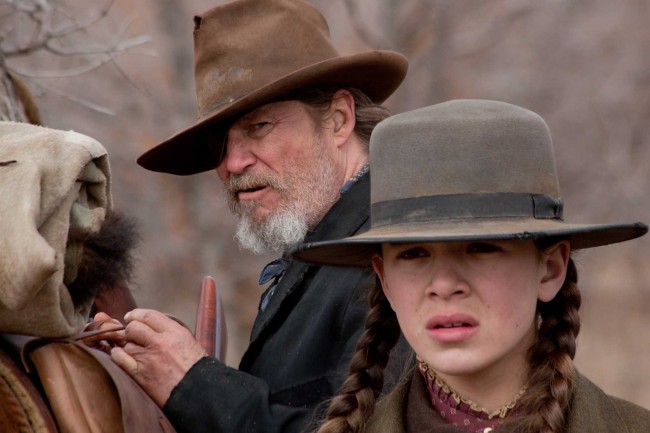 Dialogue in Coen brothers films is generally painfully clever and, in practically every fathomable situation, blunt as a dull straight razor. Comical situations arise and fall with the weight of theater sandbags. Twists are also acceptable, and usually delivered with the subtlety of a gun’s butt hitting the side of your temple. The Coens are great because they lacquer their work with graphic novel sensibilities, nip on the neck of noir, and decoupage their characters with sturdy spines and bullheaded brains. If their movies were a passenger on a subway, they would usurp your wallet from the denim throne of your pocket, slip it into their twisted paws, then dematerialize. These guys like fooling you before they punch you into their club. “True Grit” doesn’t really have any of the aforementioned traits, and at times, though the credits make it easy to brush for fingerprints, it’s difficult to believe that the Coen brothers even made the picture. The film plays like it was made by any director in the world. I kept reminding myself, however, that this is a remake of both the John Wayne original and the Charles Portis novel it was based upon, leaving the pair of directors little room to inoculate the story with their own serum. The film is well made, full of chafed gun holsters and leathery gums. There is no evidence that the film isn’t well constructed, but like an artist being commissioned to forge a classic painting, there is no real signature on the duplicate. Joel and Ethan Coen do make an enjoyable film, mechanical as it is, so there is no need to plant your toes into a racing position.

The film has to do with the ornery, acutely clever Mattie Ross, a young girl who has never once experienced what it is like to be stumped by another person. She shoots from the hip, makes every period at the end of her sentences look like a bullet hole, and uses a claw hammer to pull up any unnecessary commas in her succinct and well formed speeches. Mattie hires Rooster Cogburn, an old U.S. Marshall that has the posture of a broken pencil and morality of a checkerboard. The old gun is seemingly untrustworthy when you can actually understand what he is chattering on about. Lepers that have lost tongues have better enunciation capabilities. Mattie eventually pays Rooster to search for the murderer of her father under the condition that she can accompany him. The two join forces with a Texas Ranger (Matt Damon) whose beard’s stubble hides the fact that he has the boyish naiveté of a very young man. The three of them travel across the wily west en route to finding the killer of Mattie’s pa.

Jeff Bridges’ performance as Rooster Cogburn is decent enough, though his voice, as it warbles and buckles, sounds like a mix of Sling Blade and the Cookie Monster. And though you can believe that Cogburn’s body holds more alcohol than a distillery, Bridges is still playing the character like a wild west version of “Captain Ron”. It’s not a knockout performance, certainly, but some of the tics make it adequate enough. Hailee Steinfeld, who plays Mattie Ross, dials in the real performance. She delivers her lines with such ferocity and steadfast reliability that Howard Hawks, if still alive, would cast her in a quick nanosecond.

“True Grit” is a notch below more recent westerns – “Open Range” and “3:10 to Yuma” – but it should have no problem planting a stake into the holiday weekend as one of the most sturdy films available. The Coen’s picture is predictable to no fault of their own, rife with clueless studio clichés to no fault of their own, and unnecessarily made to the fault of everyone involved. Carter Burwell’s score wisps across the movie with surprisingly quiet grandeur, to my happiness, and the cinematography is also sharp as a buck knife. There’s nothing technically wrong with “True Grit”, but if you’re looking for the emotional impact of their catalog, you would be best setting the bar a little lower as to not disappoint yourself. Solid but uneventful.