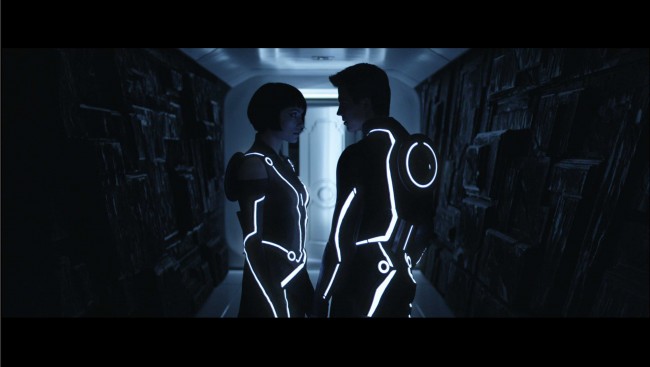 “Tron: Legacy” is about a videogame programmer (Jeff Bridges), who launches into the world of his game, never gets out, and antagonizes his son, unintentionally, by leaving a portal open so that his offspring can get into the digital universe. And what a universe it is! If anyone remembers the original “Tron”, you will be familiar with the idea that programs in this galaxy of lights, whether good or bad, wear neon jumpsuits and ride futuristic motorcycles. Master thespian Jeff Bridges was in the original, so he reprises his role here, this time as two characters. One of the characters is Kevin Flynn, the programmer of the game. The other character, nicknamed Clu, was created as a digital clone some twenty years ago and, henceforth, has not aged at all. The two battle it out for supremacy of this faux-world, where nothing really matters, because, well, it’s not really a real world – oh the drama of inconsequential circumstances!

Flynn and Clu have been at it for years, without much of a resolution, until Flynn’s son, Sam (Garrett Hedlund), enters the universe to save his father. This would be infinitely more interesting, I would assume, if Garrett Hedlund had any screen presence whatsoever. As it is, he is about as dynamic as a vending machine. It doesn’t help, of course, that his character is given bad lines such as “Whoa!” and, the ever popular existential quandary, “Is this real?!” Garrett Hedlund gets to partake in cool activities, however, like a two minute battle sequence that gives way to an avalanche of exposition. For a universe that has a glowstick-like Roman Coliseum, I would expect the digital effects team to ante up the action. Instead they sort of roll over, with their tongues out of their mouths, like a dog that is being rubbed on its stomach.

“Tron: Legacy” looks like the Wachowski brothers’ “Speed Racer”, only boring and without the inclusion of John Goodman (that sounds redundant, I am aware). Much of the production design looks curiously like a SKYY Vodka ad that has been tenderized by the aesthetic of Aeon Flux. The score, designed by Daft Punk, takes over the picture; electronic blips are met with ethereal reverb, drum machines stomp with authority, bass coils around the musical notes. The movie actually looks like a horrible music video set to a great Daft Punk song. I say horrible because the bad guys, dressed like tie fighter pilots, jump around, theatrically, as if they were channeling the “Power Rangers”. There is a line by Jeff Bridges in this movie that actually posits the question: “Tron, What Have You Become?” This line of dialogue should be on the film’s poster.

Jeff Bridges looks like he is playing Kris Kristofferson playing Obi-Wan Kenobi playing The Dude. Meanwhile, the digitalized,  allegedly youthful looking Bridges comes off as something between a melting candle and Macy’s storefront mannequin. At times, when I looked at the computer animated Bridges, he had the dead eyes of a“Polar Express” design. This was, to be fully honest, quite creepy. I couldn’t tell if they wanted the CGI to look like an embalmed corpse or a crumbling resin statue. What a grotesque situation. Even worse, to the dismay of many, is the dialogue of the film. There is nothing even remotely clever about this screenplay.

Essentially “Tron: Legacy” is like a poor re-imagining 1930s socialist Germany set to electronica music. Never have I been so bored in a theater. I should say, before I put the final period on this review, that Michael Sheen, in an effort to save this film from becoming a worse atrocity than Pompeii, actually gives a hilarious performance in a small – but energetic – supporting role. Hurrah. If you decide to see this disaster, do not see it in 3-D. So bad is the technology that there is actually a disclaimer, before the film, that says that there are a lot of sequences in the film that do not have 3-D at all. That’s a statement that should be made before you dole out your wallet feathers.