Bringing a Bazooka to a Knife Fight 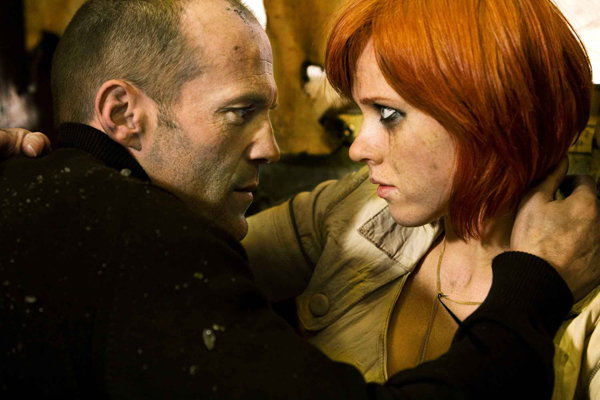 There’s no question that Jason Statham was made for action movies. He’s got that mean face that can also manage to be suave when needed and a keenly trained body. Not to mention he’s bald. Action movies gotta have bald guys. So, with that in mind, I’m not surprised that this guy keeps showing up in the latest action pictures. Movies like The Italian Job, Snatch¸ and Bank Job have shown us that Statham is more than capable of making good pictures. However, movies like Crank, Death Race, and In the Name of the King show us that he’s equally capable of making awful pictures.

Sadly, Transporter 3 is among the latter.

The film follows Frank Martin (Statham) as he’s forced back into the rigorous business of – you guessed it – transporting. The cargo he’s carrying in this installment of the franchise is actually a woman (Natalya Rudakova), something that the film plays off as a surprise but was used in nearly every bit of advertising the studio pumped out. From there, the film is a loose chain of hastily-edited chase scenes and long, choreographed fight sequences. Fans of the series will be upset to see a complete departure of character from Frank, who quite vocally and unapologetically breaks every rule by which he works and which built the foundations of the previous films.

For those of you trekking into the film looking for any semblance of story or plot, good luck, you’ll be hard pressed to find any. It almost seems as if the filmmakers forgot to add in the ever-important element of story and went back and edited in a few rough scenes of dialog, most delivered by Police Inspector Tarconi (Francois Berleand) to a nameless accompanying officer. These petty attempts at story stick out like sore thumbs in a film otherwise built entirely of testosterone and dynamite and only achieve in reminding the audience that it’s supposed to be a film they’re watching and not a tour de force of Hollywood stunts and effects.

The film is tossed together like a television commercial with rapidly jumping images, blinking transitions and shots that service the vehicles rather than the actors driving them or the action itself (though it doesn’t sink to the level of last summer’s Transformers). By theory, this editing method would work in a film whose chiefest element appears to be speed. However, this coupled with lack of story left me puzzled as to what was going on—rather, I knew exactly what was going on: Jason Statham was either driving too fast or he was fighting a mob of angry-looking foreigners, but I was never able to tell why.

As bad as the editing was, the acting was even worse. Each and every performance can be best described as “stock” (a term I hate, personally, but is extremely accurate here). Jason Statham narrows his eyes and squares his jaw to tell us he’s able to fight his way out but will be diplomatic for the sake of his passenger. Berleand squints and scratches his head, showing us that this one-line plot he’s trying to untangle is unfathomably complicated. Rudakova simply smiles and winks to tell us that even though she thinks she’s in the fast-lane to a violent death, she’s still capable of having a great time. A wide majority of the lines in this film are delivered with all the enthusiasm of a man bending over for a prostate exam and lack any emotion or conviction.

However, in the greater pantheon of action pictures, Transporter 3 may be able to stand up for itself. Jason Statham uses nearly every piece of his wardrobe as a weapon: his coat, shirt, tie, and belt. He drives his car into river, onto trains, and into trains. The effects pale compared to some of Hollywood’s wider artillery but aren’t overdone in intensity, though the effects do carry most of the film. The consistency and quality of the action scenes in this picture are the only thing saving it from the proverbial dog. For viewers who like fast chase scenes and tough fight scenes but don’t like to be distracted by story, this picture is right up your alley. However, if you’re looking for a picture with more substance, I’d say steer clear.