Much Scarier than FEARnet 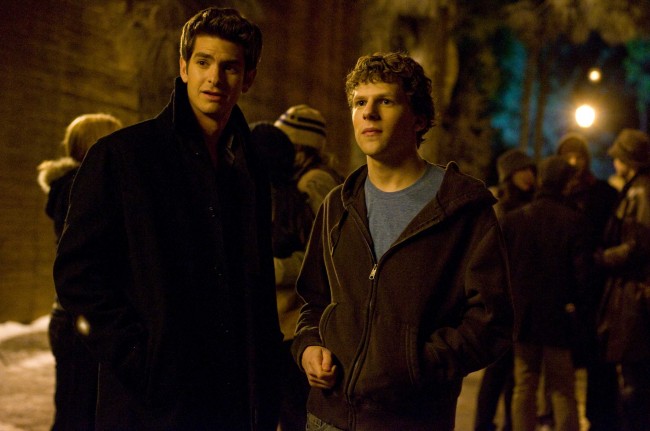 Jesse Eisenberg is terse and morose, his body structure narrow and curved like a bent wire hanger, as he curls his fingers above a keyboard. The sound of punched keys is both blunt and quick, his phalanges propelling like a bolt inside of a cattle gun, as his hands violently zap his targets before retracting. There is a particular violence to the way Zuckerberg uses a computer: He doesn’t simply orchestrate his upper-extremities to punch away on one, he instead, like a game hunter, skins it to find what he wants underneath. There is a highway of veins – in this case coding – below the surface of this particular beast.

In “The Social Network” Zuckerberg, the creator of the omnipotent blue-and-white banner we all know so well, is terse and unapologetically deft at slaying people in conversations. The young student, here, with a sweater that practically envelopes his whole body as if it were a cotton-cocoon, steals the inspiration for someone else’s idea and artistically capitalizes on it as if he was a teacher of calligraphy. By the time Facebook became a household name, it had so many fingerprints on it that it had become, quite literally, a virtual crime scene.

David Fincher, who directed this film, is a proprietor of pulpy mood. If someone could eviscerate the shadows, in order to spill even more darkness, Fincher would be the one to do it. Because Zuckerberg and company are living the serpentine life of college students, empty beer bottles reside, ever so anonymously, like spent shells from the aftermath of a great battle. Girls sit back, under the influence of narcotics, as they watch Zuckerberg and his friends code Facebook in a sort of numb haze – their limbs too lazy to cooperate, as if they were neo-Venus de Milos adorned with collegiate sweatshirts.

There is an art to this film that is evident. When Zuckerberg and his friends restively uncoil their palms to hover above their computers, you realize that music is being conducted, even if the clacking of keyboards sounds like an atonal symphony. The entire picture – it runs two-hours – is endlessly entertaining, especially when its characters verbally spar with each other. Who, exactly, created Facebook? What sort of nasty undercurrents exist under the bumpy skin of this animal’s feathers? These questions are answered with an inspired screenplay and smart direction.

The look of this film has its characters draped in clothes that present an accurately interconnected cat’s cradle of collegiate fashion. Andrew Garfield, who plays Eduardo Saverin, Zuckerberg’s best friend and Facebook co-creator, is branded with the sleepy-attire of a Boston educated student. All of the mussed hair, curled up in disheveled waves, is a watermark of scarf adorned scholars on the east coast. The cast looks the part, especially when Eisenberg’s glowering primordial glare corroborates people’s statements about Zuckerberg’s alleged lack of social tact. Meanwhile, the Winklevoss brothers, identical twins who abhor Zuckerberg for stealing their idea for Facebook, are played with brilliance by Armie Hammer. The two siblings, who row at Harvard, cull testosterone-inundated octaves from their vocal cords as if someone injected steroids directly into their larynx. The brothers, in a marred dichotomy of jock mentality and Harvard etiquette, attempt to usurp Zuckerberg from his digital throne of specialized algorithms and abstraction principles while maintaining their chiseled persona of classy men. Whew. That’s a mouth full. But it is all quite true.

“The Social Network” has an influx of clever dialogue – so much so there is almost a collapse of words caused by quip inflation. Eisenberg, whose persona is that of a misunderstood and precocious person in most films, gets the ultimate role as a coding wunderkind with the likeability of a guillotine. The role is perfect for his expressions: the young actor purses his lips while jettisoning clever rebuttals from his mouth as if he was a bastardized Howard Hawks character.

The score of the film, conducted by the brooding team of Trent Reznor and Atticus Ross, create a sort of autumn-like composition that has the sad beauty of a wake and the repressed anger of a muzzled-canine. The melodic fuzz and coy infusions of sparse instruments dolly up strange emotions from the depths of your mind. This is no doubt the best score of the year.

This is a film that demands attention. “The Social Network”, day after day, for all of its intermittent clumsiness in pacing, strikes me, from its directional prowess to its fantastic timeliness, as the most fascinating picture of the year. See it now.