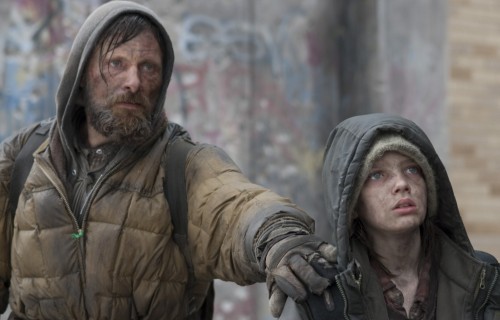 Something about the Dark Ages creeps me out. There’s a lot to be afraid of: wars, plague, famine, infections, contaminations – pretty much anything relating to the very obvious mortality rates of the time. But even more terrifying to me was the bleakness of life then. Despite all the progress humanity had made up to that point, the Dark Ages were a time when most of that progress was lost and daily life came down to a basic struggle for survival.

Even worse than the Dark Ages, judging by Cormac McCarthy’s novel, The Road, is the near future. Definitely the most plausible post-apocalyptic film I’ve seen, John Hillcoat’s adaptation presents a world where survival is not just a struggle, it’s a fight so brutal it mostly negates the value of living.

Looking at John Hillcoat’s catalogue of work, it appears he is a huge Nick Cave fan, and in fact, Nick Cave’s music weaves around the same images and feelings as does The Road: desperation, isolation, darkness, and a discomforting sense of foreboding. The Road’s beautiful but stark cinematography shows the remnants of a world that seemingly overtook itself. Mammoth, broken overpasses and trees uprooted by earthquakes are so overpowering when society has ceased to function and there are no construction crews or geologists to read a Richter scale. Nothing is lost in Hillcoat’s film. Every interaction, every expression, every memory is telling and presented in such a way as not to seem for the audience’s benefit. Rather, we are voyeurs, looking in when we can, grasping bits and pieces of existence in McCarthy’s world.

For all the desolate beauty, the realism, the acting, the pacing – all the things that make the movie an Oscar contender – I loved The Road because of its much more probable, much scarier zombie surrogates. Far more dangerous and disturbing than the dead or the undead or the half-dead are the living, fully-functioning gangs of human cannibals presented in the film. In a future where plants and animals have expired before humans, I am convinced not that cannibalism might happen, but rather that it definitely, absolutely will.

Hillcoat actually follows the formulae of great horror films, easing the audience into the knowledge that something abhorrent, something unthinkable, is going on. Through a series of disquieting, and sometimes repugnant, scenes, the audience finds its worst suspicions proven and even the most morbidly imaginative of viewers would be hard-pressed to meet McCarthy’s depictions.

I don’t mean to suggest that The Road is a horror film or that it should be avoided by anyone who is not a fan of that genre. Hillcoat is, however, an expert in suspense, psychological revulsion, and near-traumatic images. These aspects of the film set it apart from other post-apocalyptic movies in that it affects some primal mode of consciousness based in the unbearable fear of being hunted, of being prey. This play on deep human instinct makes the movie so much more personal; it becomes so much easier to be drawn in.

Considering his fairly modest body of work (five films, three of which involve Nick Cave), Hillcoat is something of a genius director. How he has managed to capture so much in such a sparse movie is an incredible testament to his talent. In washed-out color and cropped statements, The Road somehow merges each point on the spectrum of human emotion to create a totally affecting, engrossing experience.

Viggo Mortensen, who plays the main character, is an astoundingly versatile actor. The course and success of the movie rests in his hands, and as Hillcoat captures so much in so little, even more so does Mortensen convey so much in so little. In a character simply called “Man,” Mortensen transcendently embodies all humanity. Hopefully the Academy Awards will reward him for his performance.

There is no note of optimism in The Road. Even the final scene lingers with taut uncertainty; can there really be a happy ending in such a depraved world? Yet, the film is still appealing. Perhaps it is the insistence of Viggo Mortensen’s character to be a “good guy” in the face of such horrific opposition, or perhaps it is our own human instinct to continue, to move forward no matter what, but even after so many exhausting challenges, when it seems like it would make sense to give up, the end of the movie leaves us hoping for more, filling in our own details to further the story, to ensure its progress down the road.