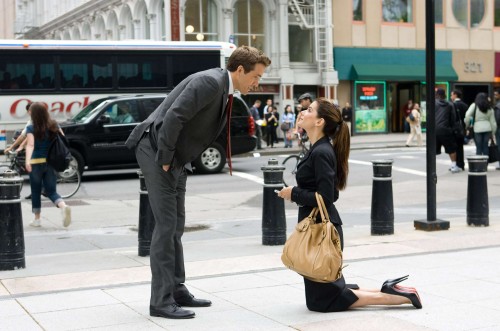 Being a female, one might assume that I would be into chick flicks. The truth is, I’m not. Sappy and romantic films aren’t among the top on my list of favorite movie genres. At rare times, they can be tolerable.

“The Proposal” mainly sparked my interest due to Ryan Reynolds’ starring role in this romantic comedy. Combining his comedic relief and stunning good looks with Sandra Bullock’s own humor and feministic overtones is a recipe for entertainment. Reynolds holds a successful record for comedic projects: “National Lampoon’s Van Wilder”, “Just Friends”, and “Waiting…” to name a few. Sandra Bullock seems to usually land roles as a powerful woman who ends up revealing her true self after building a lie such as “Forces of Nature”, “Miss Congeniality”, and “Two Weeks Notice”. Both actors do well at executing the essence of their characters; so seeing the two together on the same screen should be a good treat.

“The Proposal” is about a dilemma that Margaret Tate (Sandra Bullock) gets herself into. Maggie, a cutthroat chief editor at Colden Books who stomps around in Christian Louboutin pumps and totes Louis Vuitton handbags, is both feared and praised among her co-workers. Maggie is commonly referred to as “It” and leaves a chill towards anybody she communicates with. Without family, friends, or a lover, work has become Margaret’s life and it has caused her to function like an apathetic machine who thirsts for success and perfection. Her angst executive assistant, Andrew Paxton (Ryan Reynolds) is stuck working with ‘the witch on a broom’. He is obligated to obey to all of Maggie’s commands in fear of losing his job.

When Maggie seems to be on top of her career, she creates a flaw in her personal life. Being a Canadian citizen who failed follow immigration procedure, the United States government refuses to renew her visa. After realizing this is an unavoidable conflict, she risks losing everything that she’s worked hard for.. In the forthcoming weeks, she is getting deported back to Canada, unless she comes up with a plan. Andrew breaks in and accidentally gives her the perfect idea. He unknowingly proposed to Maggie with his slip up on words.

Maggie settles her superiors’ concern and informs them of the solution to the dilemma. She announces the news of her upcoming marriage to Andrew which will end the ordeal altogether. Later, she reveals the truth to Andrew and proposes an attractive compromise. Maggie will promote Andrew to editor under the conditions that he marries her to prevent deportation. Both parties agree to a divorce following the temporary marriage and consider it simply as a business transaction. Maggie fails to realize that this is the first time that she is the needy one. Andrew seizes this opportunity to take advantage of Maggie’s reliance on him. He decides to treat her the way he’s been wanting to all long – with angst and brutal honesty.

Now, he only thing that stands in the way of completing this foolproof plan is relaying the news to the immigration. There is a block on Maggie’s road to citizenship. A bitter former co-worker whom she fired gave the government officials a heads up on her plan. This tip gave the red light to halt the marriage process and take a closer look at Maggie’s case. An immigration officer (Denis O’Hare) is assigned and informs the “couple” of their attempt at fraud. In order to fool the officer, both Maggie and Andrew put on a show that fakes the intimacy with one another. Although a difficult task, they barely pull it off. The officer informs Andrew of the consequences he will face if he is caught and lets Maggie know she will be deported.

The couple decides to spend the weekend together in Sitka, Alaska to celebrate Gammy’s (Betty White) 90th birthday. Away from work and proper internet connection, Maggie and Andrew spend time among family and reflection. Each person gets revelations about the other when they are faced with deciphering what is the truth. The rest of the story is based on the misadventures Maggie and Andrew face with the false relationship they created.

I enjoyed Bullock’s character Maggie. She amused me when she was “It”. Maggie was even funnier while trying to acclimate in her unfamiliar surroundings in Alaska. She bored me when she was thawing from being an ice queen, though. Reynolds was able to pull off the role as Andrew in all perspectives: the slave, the opportunist, and even the modest Alaskan Kennedy. The funniest costar had to be Gammy; White was hilarious.

While the business chemistry between Bullock and Reynolds was enjoyable, the intimate chemistry was a bit disturbing. I get the whole “Demi Moore/ Ashton Kutcher” and “”Linda Hogan/ Charlie Hill” thing. I know guys think it’s cool to get with cougars. But, I think Bullock was a little too old for this part. Seeing her face with crow’s feet up close and personal with Ryan Reynolds’ irked me. Just because she is in great shape does not mean she could pull off “sexifying” the scenes with Ryan freaking Reynolds. It was difficult watching the clashing personalities who “were not meant to fall in love” actually fall in love in the end.

The director, Anne Felcher, pleased the masses once more by making a film that made people laugh and learn a lesson or two. She did it once in the chick flick “27 Dresses” and succeeded once more. I felt like the story zoned in how people take marriage so lightly these days. Also, Maggie’s reminds the audience to expect the unexpected and to remember there are two sides to every story. “The Proposal” is an almost perfect romantic comedy. For women, we have Ryan Reynolds and the designer accessories to gaze at. The men have the cute jokes and a lesson or two they can take notes on.