The Last Days on Mars 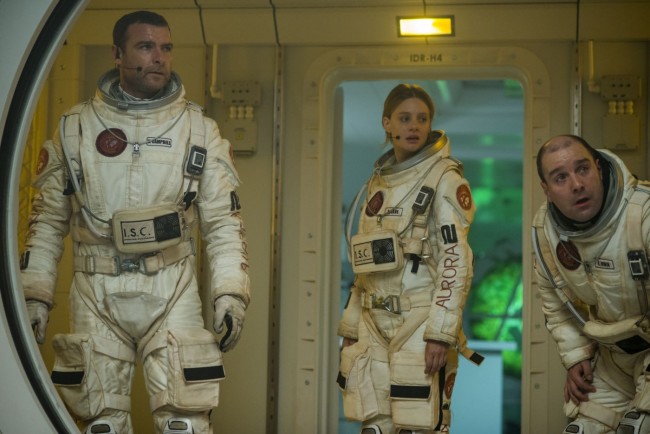 Ah, makeshift habitats erected in space. Sterile ivory chambers that are crosshatched with artificial light? Check. Blinking keypads in a padded labyrinth of human megalomania? Tick that box. These are typical sights for films dealing with space exploration. Never forget that our species wanders in an incubator comprised of eggshell safety. The Last Days on Mars shows the feeling of acute isolation (somewhat) in its laborious ninety-eight minute running time.

Based on a short story by the late Sydney J. Bounds, director Ruairi Robinson shows us the red planet as a breeding ground for pestilential whirlwinds and milk toast plot devices. Our story revolves around a group of intrepid researchers as they comb Mars for signs of life. Vincent Campbell (Liev Schreiber), a distraught and weary crewman, pines for the sights of earth’s green, rolling hills and glistening sun-specked lakes. Little does he know, one of his team’s scientists, Marko Petrovic (Goran Kostic), has made an axis shaking discovery about the soil on Mars. Sadly, because he is both reticent and mousy, Petrovic initially keeps the information to himself, causing his crew’s DNA to be reassembled by an unassuming virus.

Before long, the infectious agent spreads, imploding nervous systems and mutating cells. The research crew must use their bumbling wits to find an antibody, an escape plan, or a latched door to keep the virus at bay. The usual suspects are all present in this science-fiction opus: sparking wires, mechanical whirring noises, characters skulking around in hallways. Obligatory discussions concerning the compromised health of a character come up, if you were wondering when that tired trope would rear its compliant head. Still, Robinson manages to give The Last Days on Mars a hairline crack of intrigue. Even if it’s an uninspired visual choice, when you enrobe the aesthetic of your film with the intense plasticity of waiting room lighting, everything seems inherently grim.

The suffocating claustrophobia of omnipotent danger is wrung out over every scene. And while the dialogue sometimes feels inert and moribund, Schreiber elevates the material by employing a total sense of tactile sincerity. You can sense that he really believes in this film. Without this kind of dedication to the story, The Last Days on Mars would feel more benign than virulent. Unfortunately, the film’s supporting cast doesn’t quite preen their performances in the same manner. Elias Koteas reprises his role as a weathered, emotionally flaccid leader (hey, The Thin Red Line). His character mopes and withers with every passing situation. Occasionally Koteas will bark an order, but his character is resigned to simply shrink back into a shell of indecision. Robinson’s film has one too many translucent, one note supporting characters (from scene one, Olivia Williams is gritty, ornery and perpetually angry for no discernible reason). These are characterizations of moods and not deft portrayals of people.

Because it’s impossible to have empathy for these characters, the film surrenders any possible drama that would have otherwise been achievable. It’s like watching a lane of bowling pins ready to be shucked of their equilibrium. Sadly, the most eerie, suspense laden sequences of The Last Days on Mars exist before the ravenous zombies start paddling their infected paws on the windows of the doomed outpost. Once the virus begins to slay the members of the station, everything becomes vacuous, predictable tripe.

Ultimately, it’s difficult to completely pan the science-fiction film, because of its unnerving set design, but the porous dialogue and the grocery list of cliches sink the picture in the second half.

The Last Days on Mars opens today at Ken Cinema.