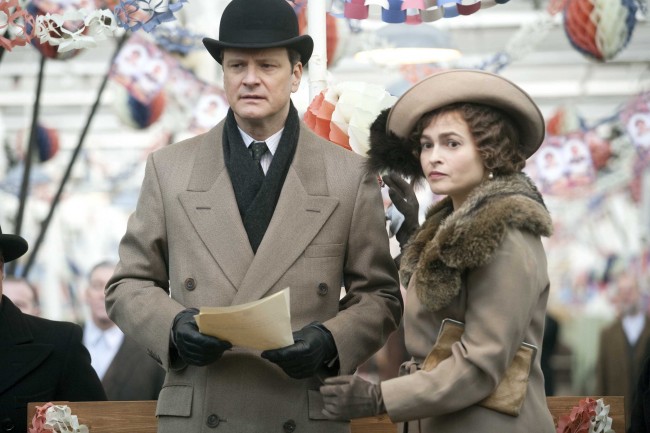 I wanted the title of this review to be “Colin Firth is Adorable; Makes Doe-Eyed Expressions”, but then I thought I could also go with “English People Look Regal; Walk Around Haplessly”. I decided against both, but managed, despite it being entirely inconsequential, to shoehorn them in the actual review. Typically films dealing with historic source material are award contenders. They generally feature actors that gaze the obligatory existential gaze. Other times, they show a person of power, who is stressed out because of an impending disaster, rub their brow until their forehead is sanded into oblivion. I also enjoy historical epics because the musical arrangements typically swell so much they look like they were beaned by a Walter Johnson fastball. More often than not, you can strike gold with having a world war II drama. Sometimes, like “The King’s Speech”, you can have a biopic, dealing with extraordinary circumstances, that even predates Nazi Germany! This is difficult to believe, I know, but it is possible. Here, in the world of doughty England, sometime before the Brits went to war with that big gray empire known as National Socialist Germany, Prince Albert, Duke of York (Colin Firth) was struggling with a mighty speech impediment. King George V often shook his hands at his youngest son, Prince Albert, because he couldn’t deliver messages in a succinct, commanding tone. This was of particular distress to the king because he knew that, while Prince Albert had an older brother (Guy Pearce) who would take the throne, he would, by all accounts, need his other son, Prince Albert, to be ready to lead a kingdom. Because of this debacle, Prince Albert’s wife, Elizabeth (Helena Bonham Carter), decided to do what any empire should do in a crisis situation:

This is the logical conclusion, especially since Geoffrey Rush has had afflictions in films before (“Shine” and “Pirates of the Caribbean”). Rush plays the unorthodox speech therapist Lionel Logue, who helps Prince Albert shed his issues with stuttering. I should have given a spoiler alert, but I imagine the author of history itself has made the bigger party foul on that one. Of course, because Albert is of divine royalty, he is stuffy and resolute with his power of authority. Rush, on the other hand, suggests that, while in his office, his patients, whether of power or not, should be on the same level as one another – how dare he! The movie is a jambalaya of regal dissatisfaction and peasant-like wisdom. Every person in this film battles each other with wit, as Americans have learned that English people generally do, and carve out quips at a breakneck speed. At the ballyhoo continues with the odd couple formula, the director of the picture, Tom Hooper, decides to film continuous close-ups of his cast. I’m relatively positive that these cameras have been closer to these actors’ faces than their personal dentists have been. I’m not sure what Hooper was trying to accomplish, but it looks like he forced every actor, against their own will, to head butt the camera. I felt like I needed a wielding mask to watch this picture.

I have to say, despite the disastrous notion of an approaching war with Germany, much of the movie is chalked full of a whimsy. Colin Firth looks like a bobblehead doll, for most of the movie, as he boyishly rattles his head and looks, curiously, as if he is about to tip over at any moment. The thespian’s performance is pretty great, though he often plays Prince Albert as if he was Robin Williams in “Jack”. Without the great acting of Firth and the palpable chemistry with Rush’s bowtie, “The King’s Speech” would be a Hallmark drama with a damp fuse. The story is, in all honesty, a Disney sports movie, in the style of “The Rookie” or “Remember the Titans”, that finds its hero overcome adversity to find a happy ending. I also found it refreshing to see Helena Bonham Carter not play Medusa for once in a movie. I swear, in every movie she looks like she has the energy of a rabbit that has just taken fourteen 5-Hour Energy shots. Finally she is subdued, delightful, perfectly nuanced.

I recommend “The King’s Speech” if you like feel good historical dramas about the beginning of world war II or Timothy Spall pretending to be Winston Churchill but instead looking like Alfred Hitchock.