Home » Film » The Girl Who Played With Fire

The Girl Who Played With Fire 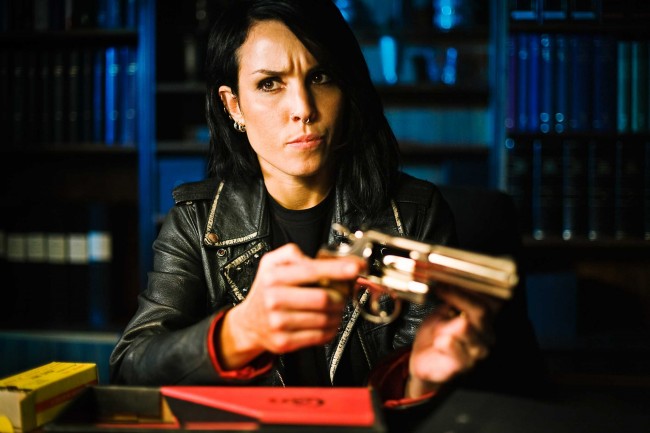 “The Girl Who Played With Fire,” the second film adaptation in author Stieg Larsson’s Millennium Trilogy, centers around Lisbeth Salander (Noomi Rapace), an asocial computer hacker whose diminutive exterior hides the rage of a feral animal. Salander wraps herself up in jackets that look borrowed from The Clash’s Joe Strummer. And her hair looks like she took pointers from Aeon Flux. I imagine our protagonist’s disaffected attitude is supposed to look wildly irreverent or curiously atypical of female heroes in culture. And while the lack of taffy-like sensibilities and wince-inducing saccharine is vacant, I feel the need to sigh heavily at our character’s woe-is-me attitude.

The second installment in the hugely successful book series, seen here on screen, is a perforated web of clichés and uninteresting plot points. Salander ends up being framed for a triple murder while she is sulking about in the Caribbean (and when I say sulking, I mean she is shuffling her feet like a wind-up toy while dropping her head down in feigned existentialism). It seems that everyone thinks that she has a motive for at least one of the murders, especially when her volatile past is unearthed, making the spindly heroine a target for authorities in Sweden. Meanwhile, Mikael Blomkvist (Michael Nyqvist), her journalist friend, attempts to reach his shadowy pal by means of e-mail correspondence. In fact, everyone in the film is clacking away on computers. When Salander’s spider-like fingers aren’t climbing all over her keyboard, Blomkvist’s hands are arched over his personal computer. The illumination from computer monitors bounce off everyone’s face, as the eyes of the film’s characters continually run back and fourth like worry beads being kicked by the thumb of the director. This gets old after awhile, and is almost like being invited over by your friends, only to be forced to watch them study for their thesis papers in a dark room.

Not to say there isn’t some action in “The Girl Who Played with Fire.” Throughout her romp across Sweden, she ends up grappling with seedy looking baddies who have the IQ of a dartboard. One of the antagonists in the film is built like the Iron Giant, from the movie of the same name. The lecherous tank of a man is essentially a Bond villain, complete with ridiculous spy novel traits such as not being able to feel pain. Getting kicked in the crotch? No problem here – he cant feel a thing! You can practically hear the exaggerated reverberations from a gong being struck each time this guy is hit. These kinds of tired maladies plague a film that could otherwise be taken seriously.

The biggest problem here is that the film shirks logic. In a story that pretends to be hyper-vigilante about its dark structure and unflappable realism, there tends to be a sort of unintentional silliness that sprouts up through the director’s freshly laid cement. Characters tend to follow bad guys, when they are clearly unprepared for a confrontation, and attack them instead of using a cellular phone to get help. In other situations villains manage to rope up their prey, in an obligatory manner, only so that they can make an exposition long enough for our hero to find a way to get loose. All of these things are standard topography in action/suspense films.

The film is also unpleasant to look at. Many of the scenes involve flashbacks where murky lighting envelopes everything to the point where it feels like you need a maglite to understand what’s happening. In other sequences we’re forced to watch gooey ropes of saliva swing from the greasy, contorting faces of characters who are engaging in sex. The whole spectacle has an unsavory, gelatinous texture that borders on disgusting.

Lisbeth Salander’s character has the ability to be a breakaway female hero: she is independent, resourceful and clever. Most impressively, the character abandons the notion of being buxom and structurally compliant in the way of Lara Croft and other aesthetically puffed up action icons. Problem is, the story that Lisbeth is given handicaps her true potential. Do we really need a maniacal heavy to act like a poor man’s Juggernaut? Can we actually have a twist that isn’t borrowed from a greater movie? Isn’t logic an expected trait in at least one written character? Oh well, maybe next time.