The Best of Arnold

I was a child of the ‘80s and ‘90s, and as a result I was weaned on action movies, particularly the glorious works of Bruce Willis, Sylvester Stallone, and, OF COURSE, Arnold Schwarzenegger. Watching these films still imbues me with a sort of visceral delight, an upsurge of joy and contentment within the universe.

I couldn’t tell you what percentage of my delight comes purely from nostalgia, and what percentage comes from the fact that, seriously people, these films are straight up amazing in so many ways. My taste was formed in part by these movies, so while I can tell you what I love best about them, the process is naturally something of a snake eating its own tail. I love these movies because of these great elements, and I love these elements because I grew up loving this sort of movie.

Without further ado, my personal Best of Arnold Schwarzenegger, possibly the most quotable actor of all time: 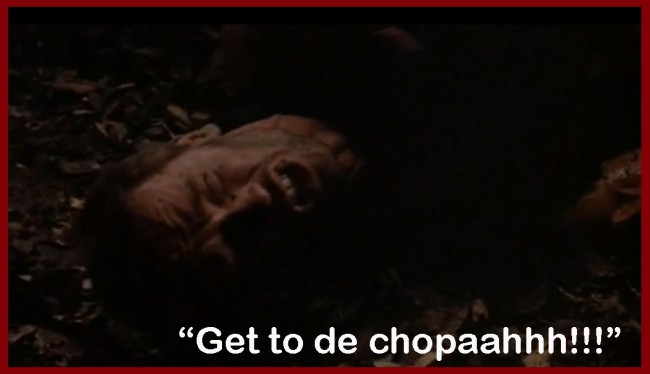 His name is Dutch. He is on a McGuffin of a mission in Central America when OHMYGOD IT’S THE PREDATOR! An extraterrestrial that apparently spends its entire life hunting other species, improving its hunting methods, and admiring other predators’ hunting methods. Is that going to daunt Arnold? Hell no. Arnold will slather himself in mud and rig elaborate jungle traps and go after it with a knife if he has to. The movie also includes Jesse Ventura as Blain, the self-proclaimed “sexual Tyrannosaurus,” and the always amazing Carl Weathers as Dillon, the dude who unfortunately got them all into this mess. Muscley dudes in the jungle fighting a kick-ass alien with dreads? Count me in.

“Dillon! You son of a bitch!” [zoom up to the loud crack of a bicep-flexing arm wrestle handshake]

“GET TO THE CHOPPER!”

“You… are one… ugly motherfucker.” 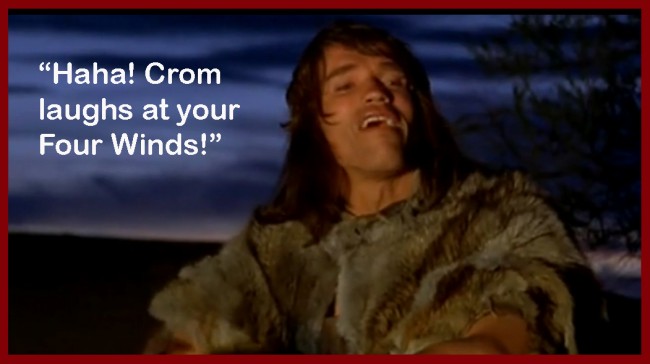 His name is Conan. He’s a barbarian. He grows up in slavery, and embarks on a quest to kill James Earl Jones (a.k.a. Thulsa Doom, the snake sorcerer who slaughtered his people). Along the way he chops a lot of people apart, gets crucified (during which he kills a scavenging bird by biting open its neck), comes back from the dead, avenges his family, saves a princess, and of course solves the Riddle of Steel. He has crazy hair! His accent is hilariously thick! And did I mention all the hacking and chopping? Did I mention that James Earl Jones’ head turns into a big snake? Did I mention “what is best in life?”

“Valor pleases you, Crom… so grant me one request. Grant me revenge! And if you do not listen, then to HELL with you!”

“Conan, what is best in life?”

“To crush your enemies. See them driven before you. And hear the lamentations of the women!” 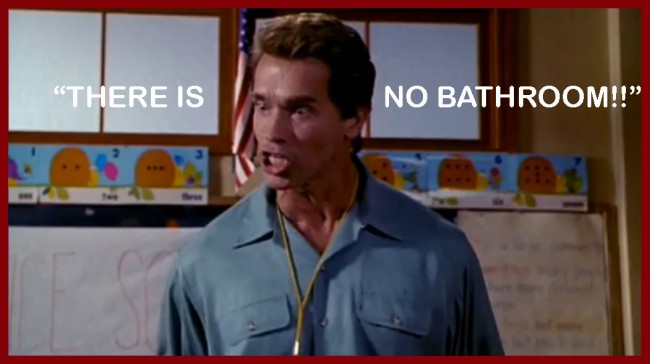 His name is Detective John Kimble. He’s a cop, you idiot! And he has to go undercover as a kindergarten teacher to find the incognito ex-wife of a dangerous drug dealer. Okay, it doesn’t matter why he is there! He is Arnold Schwarzenegger and he is trying to control a classroom full of five-year-olds, it is CLASSIC. It unfortunately inspired other thuggish male actors to do “hilarious” children’s comedy, however none of them achieved what Arnold achieved, which is genuine juxtaposition humor. The P.E. drills! The ferret! The little girl who just wants to go pee!

“THERE IS NO BATHROOM!”

“We’re going to play a wonderful game called ‘Who is my daddy and what does he do?’” 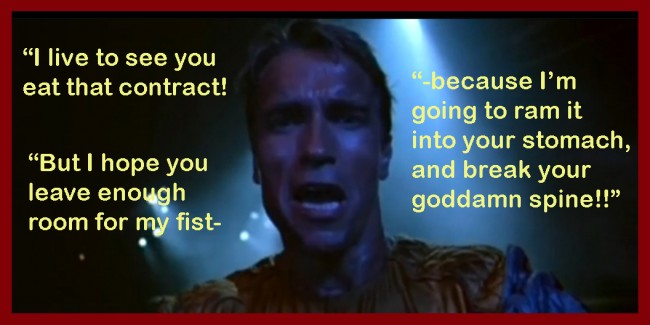 His name is Ben Richards. He was falsely imprisoned for a terrible crime, and now he has to compete on the futuristic game show ‘The Running Man,’ which is really just an entertaining method of public execution. Yadda yadda he proves his innocence and overthrows the show and kills all the hilarious executioners—and he does it all in an outstanding outfit of yellow spandex. The movie is just a series of ridiculous one-on-one fights with ridiculous ‘stalkers.’ Captain Freedom: Jesse Ventura again. Fireball: yeah he has a flamethrower. Buzzsaw: you got it, he has a chainsaw. Subzero: he freezes things. And my absolute favorite stalker of them all, Dynamo: a fat man in a suit covered in light bulbs who sings opera and throws electricity. Yesssss.

“What happened to Buzzsaw?”

“I’ll live to see you eat that contract! And I hope you leave enough room for my fist, because I’m going to ram it into your stomach and break your goddamn spine! AAHHH!!” 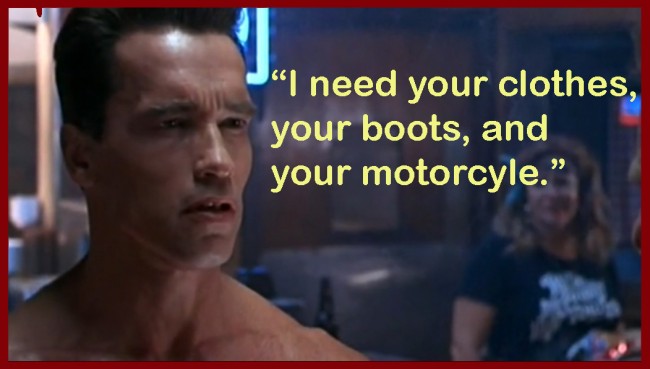 His name is the Terminator. He is a cybernetic killing machine. He has been re-programmed to protect Sarah Connor’s whiny teenage son, John, from an improved model of cyborg coming back from the future called the T-1000. Now the first Terminator film had its merits (Sarah’s crazy mullet, the awkward love scene, the legitimately cool final battle in the factory), but T2 has a fonder place in my heart. T2 contains scenes of Arnold acting as a cyborg trying to understand human emotion. It contains scenes of Robert Patrick melting into silver puddles and reforming more determined than ever. The action and effects have a bigger budget, the chase scenes are excellent, and the end of the film is a big old paradox you’d better not try to understand.

“I need your clothes, boots, and your motorcycle.”

“I sense injuries. The data could be called ‘pain.’” 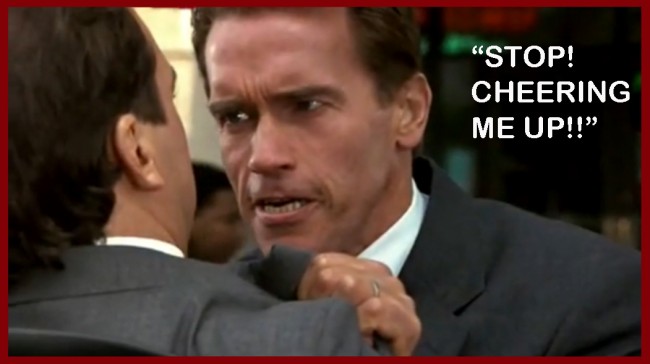 His name is Harry Tasker. He is a secret agent, and he is supposed to be tracking down terrorists, but he is even more interested in using governmental resources to determine whether his wife is having an affair. Oh god I love this movie so much. I would argue that this film is genuinely high in quality and long-lasting in intentional hilarity, as opposed to most of Arnold’s films, which I recognize that I love out of nostalgia for their ridiculousness. It has a great cast and they play off of one another beautifully. Jamie Lee Curtis plays his bored wife, Helen. Tom Arnold plays his stressed partner Gib, and Bill Paxton is exemplary as the sleazy used car salesman pretending to be a secret agent to pick up chicks. Ahhh it is a comedy classic. Arnold spying on his wife! Arnold under the influence of truth serum! Arnold terrifying Bill Paxton! This is my second favorite Arnold movie of all time.

“Give me the goddamn PAGE!”

“Have you ever killed anyone?”

“Yeah, but they were all bad!”

“Can you hurry up? My horse is getting tired.” 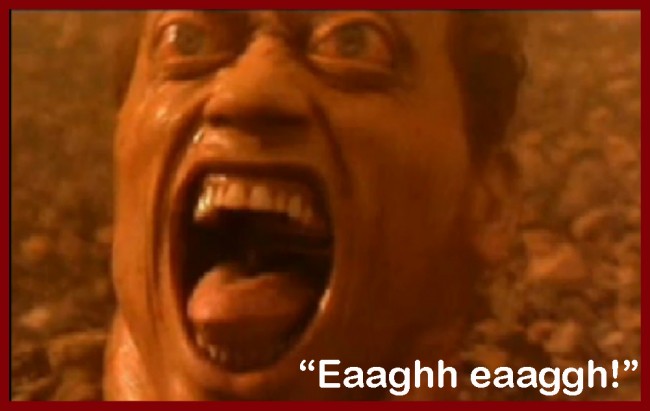 His name is Douglas Quaid. Or is it Hauser? He has recurring dreams about Mars, which leads him to use a cheap memory-implant service to buy a dream vacation to Mars, which partially unblocks a memory wipe which had been concealing the fact that he really had been to Mars! Except! What if the memory implant went bad, and all of this really is a dream? Can your brain contain it??

None of that matters! What matters is that Arnold kicks everybody’s ass, including Sharon Stone’s. He disguises himself as an enormous woman. He stabs somebody through the head with a spike. He meets a mutant woman with three breasts, and an even more glorious mutant named Kuato who is a psychic baby-monster growing out of a dude’s chest. He pulls an enormous tracking device out of his nose. At one point, during a shootout on an escalator, he grabs some random bystander and uses him as a human shield, and that is A-Ok. He nearly explodes from atmospheric deprivation. He snaps necks. He refuses to take the red pill.

THIS is my favorite Arnold movie of all time. It exemplifies everything great about his action films. Over-the-top violence, ludicrous plot devices, a slew of cheesy one-liners, and a complete disregard for bystanders. This is Total Recall, and it is not a guilty pleasure. It is simply a pleasure!

“Howdy, stranger! This is Hauser. If things have gone wrong, I’m talking to myself and you have a wet towel around your head.”

“See you at the party, Richter!”

“Come on, Cohaagen! You got what you want! Give these people air!”

“What have you been feeding this thing?”