When Nightmares Become Your Paul Revere 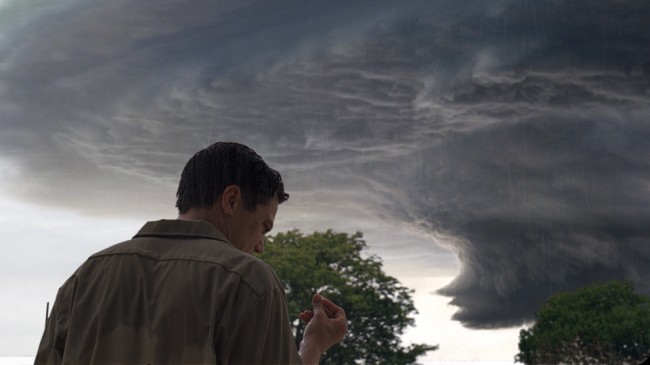 Jeff Nichols, the director of “Take Shelter”, is a locksmith at turning the key on rustic, red dirt worlds of volatile friendships and swinging-gate relationships. The filmmaker is only two films into his career – “Shotgun Stories”, his first fiery opus, was a powder keg of a movie – and he has already become an artisan painter of  hard barked character interplay and desolate, salty landscapes. Michael Shannon’s reptilian features and bedraggled mop of hair are put on full display, as the hoarse-voiced thespian plays Curtis LaForche, a meek family man who is experiencing dreams of an immanent apocalypse. Curtis begins having spring-loaded night terror, that Johnny Barrett, in Sam Fuller’s “Shock Corridor”, would have emphasized with. Curtis senses that his dreams are an intangible compass pointing to the end of the world, a hell not unlike John Milton’s Paradise Lost. Our protagonist, based on his fears, begins, without the blessing of his family, to build an elaborate storm shelter in the shadow of his home. Curtis’ nightmarish visions rival those of Richard Dreyfus’s grizzled portrayal of Roy Neary, the mashed potato sculpting electrical engineer in Steven Spielberg’s “Close Encounters of the Third Kind”. The buzzing apparitions in “Take Shelter”, however, are much more alarming than those in the aforementioned Spielberg picture. Curtis’ reality becomes thick, malted, coagulated mess of desperation and uncertainty. What was once Norman Rockwell has now become Francis Bacon. Shannon’s eyebrows float into an expression of total devastation, and there isn’t a nanosecond in the film when you don’t feel lacquered with a sense of peril.

Nichols’ film presents nature as a tyrannical entity, a wrecking ball made of amperes and megajoules. Birds act like biblical locusts and man watches, straightening his belt, as if it were a suture to stop his ailing stature. “Take Shelter” is a horror story for modern times, where the economy flickers and bursts into starry ash. Financial stability is a block of wood being pulled out of a giant game of Jenga. And the boogie man doesn’t wait for you, in adulthood, he is the covers that you hide behind. The whole movie is a mess of open nerves and creased emotions. The feigned confidence that people have become accustomed to has become molted snakeskin. Nichols proposes that, in our current climate, doubt is the only tool in your Swiss army knife’s arsenal. “Take Shelter” wouldn’t work, however, without the work of Shannon. The actor’s brick and mortar jawline and weathered eyes are a dichotomy of strength and, conversely, weakness; its a face that is forever on the precipice of anguish and anger.

Curtis’ pillows have become a padded cell to his mind. Is he correct in his assumption that the world is ending, or is he insane? The film stutter-steps, perspires, lets its roots claw into the fertile soil of the audience’s chest. “Take Shelter” isn’t a slasher film, where heavy-breathing madmen unsheathe stainless steel shopping knives. Gnarled beasts, with bubbles of saliva, aren’t courting the jugulars of teenagers. No, this is a horror film for adults, where the world is imploding, and the axis mundi between the brain and the body has been severed. Some may find the slow drip approach, where tension is seen in the push of a spoon or the weight of a hand, to be incalculable in an era of instant gratification. But “Take Shelter” succeeds with its brooding atmosphere and fireside driven storytelling. Curtis could be an unreliable narrator, in the fashion of William Makepeace Thackery’s Barry Lyndon, but we’re unsure – and it doesn’t really matter. Truth and fiction have been blurred by the bootprints of the probable.