Starting with 1903’s “The Great Train Robbery”, the western has been a staple of American, and international, cinema. The genre can range from savagely brutal, like “The Hateful Eight,” to side-splitting comedy like “Blazing Saddles.” 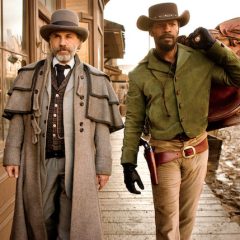 A Fistful of Squalor Review written by Robert D. Patrick Starring: Jamie Foxx, Christoph Waltz Django Unchained, Quentin Tarantino’s cinematic soiree of bloodshed and molar-gnashing revenge has been a hotbed of controversy ever since the press fastened into their seats for the initial advance screenings. Inside the film, derogatory slurs are said cavalierly and bombastic action sequences flip by with abandon. Outside of the... 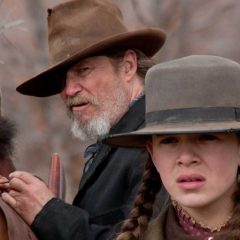 Best Ghost Directed Film of the Year! Starring: Jeff Bridges, Hailee Steinfeld Written by Robert Patrick Dialogue in Coen brothers films is generally painfully clever and, in practically every fathomable situation, blunt as a dull straight razor. Comical situations arise and fall with the weight of theater sandbags. Twists are also acceptable, and usually delivered with the subtlety of a gun’s butt hitting the side of your temple. The... 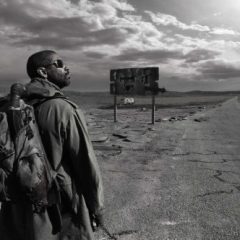 The Book of Eli

Fallout 3: The Movie Starring: Denzel Washington, Gary Oldman By Robert Patrick Denzel Washington waltzes around, brandishing a large blade, when he traverses through a post nuclear fallout. It’s pretty difficult to not, in all of its theatrical glory, get behind a simple theme like the aforementioned one. Eli (Washington) is cool and collected, much like your typical weapon wielding hero; he dons pitch black shades, and he doesn’t... 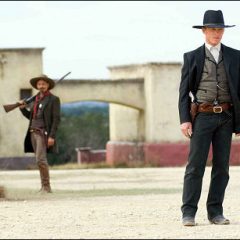 A Distracting Western Dust Up By Colleen Dillon Watching Appaloosa, I was pleased to find that my expectations for the movie were being adequately met. After last year’s 3:10 to Yuma, I felt a spark of excitement at the thought that the Western genre was being revived. There, in James Mangold’s masterpiece, was the perfect formula for bringing modern viewers into the gritty stories of the Old West. And Appaloosa, too,... 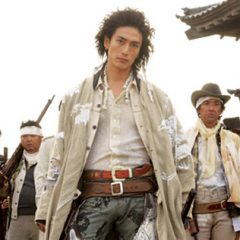 Like Watching Open Surgery Starring: Hideaki Ito, Quentin Tarantino By Robert Patrick Most directors choose to orchestrate their films with cameras and lights. Japanese born director Takashi Miike, whose style never took to minimalism, seems to almost prefer to work on his films with a meat clever instead of lens. Sukiyaki Western Django, Miike’s newest carnage filled extravaganza, is a spaghetti western set in the 1880’s. The film is...

The Assassination of Jesse James by the Coward Robert Ford

Founded in 2008 by Rob Patrick, Cinema Spartan's primary function was to initiate conversation within the San Diego community about film. Since then, it has branched out into a myriad of topics, including music, art, and popular media. Cinema Spartan is a major motion picture credentialed outlet with membership in the San Diego Film Critics Society. All articles and content are copyright © 2017 Cinema Spartan and its respective writers.
Loading Comments...