Surviving Megalopolis is the second arc of the Kickstarter funded project Leaving Megalopolis, from the creative team of Gail Simone and Jim Calafiore, previously known for their work together on DC’s Secret Six. The basis for the overall story centers around the safest city in the world, Megalopolis, and what happens when the numerous heroes who defend it are turned into homicidal maniacs by an invading evil force. The first arc followed a group of survivors as they endeavored to escape the condemned city and its menacing heroes. The focus of this second arc will be a team trying to survive going back into the city on a rescue mission. 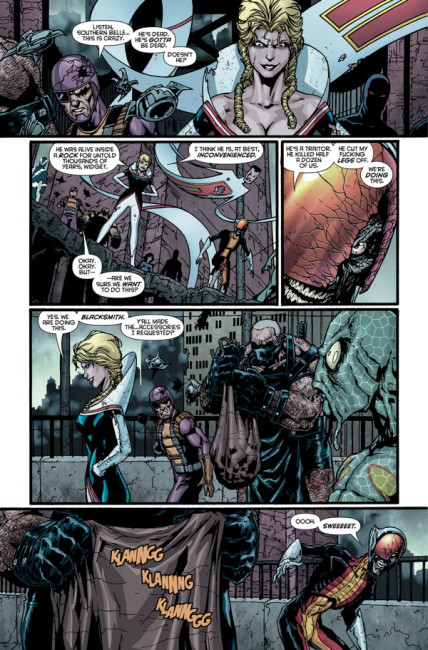 A page from Surviving Megalopolis #1.

While this first issue is fairly new-reader friendly (any absolutely essential information is provided via flashback or the recap page), it accomplishes frustratingly little and spreads itself way too thin. In its brisk 22 pages, the book sets up three different story lines. Each of which, while not at all uninteresting, accomplish little more than a bit of banter and a semi-cliffhanger. They make sure to quickly cut away to somewhere else just as anything of substance is about to happen. This structure could easily be a turn off for new readers. While these character and plot lines are all inevitably moving towards each other, it’s hard to stay interested if you have to wait a month just to get another couple pages further each.

The art and writing work well in the world they are creating. Even outside of Megalopolis, this isn’t a pretty place to exist. Calafiore’s art adds a jagged edge and bleakness to a world where it seems even the “good guys” are all too happy to jump to gratuitous violence with minimal provocation. Overall the dialogue also works well, and is certainly crass as you’d expect it to be with characters like this. On occasion however, it seems a little excessive and even cringe worthy. A character whispering into the protagonists ear “I can see your fetus” (as far as I’m aware she is not at all pregnant) in an attempt to be scary left me with big cartoony question marks over my head. The opening 6 pages or so also average about an f-word per page, and they only seem to be used to really drive home the idea that hey, These are bad guys, don’t like them. It’s as if to suggest we need those excessive dialogue cues because there isn’t enough going on otherwise to be able to tell. The way the heroes interact with each other does a fine job of establishing their lack of empathy. Beyond that, one or two f-bombs in the opening pages would have been plenty effective, five or six just felt lazy.

Surviving Megalopolis is a bleak and violent world that has the potential to get right up in your face and demand your attention. The characters are grey at best and vicious brutal sociopaths at worst, making survival and safety anything but a sure bet for either side. It tries too hard to go in too many different directions in its first issue however, and leaves you feeling as though you just read a free comic book day preview. Hopefully they improve on their pacing in the coming issues, otherwise it would likely better suit you to just wait for the trade.