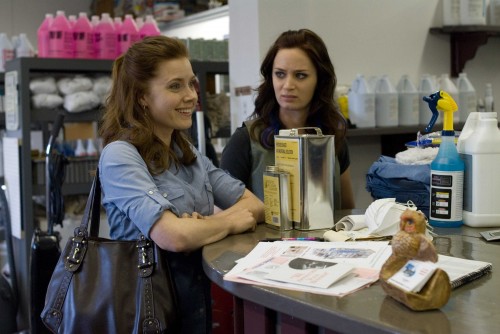 Funny, touching and sensitive, director Christine Jeffs has created a gem with Sunshine Cleaning, an off-beat comedy about the trials and errors that life throws at us, and the funny way things end up working out. Set in New Mexico, Sunshine Cleaning stars Amy Adams and Emily Blunt as sisters who team up to start their own biohazard removal/crime scene clean-up business. Adams is Rose Lorkowski, a single mother, trying to live her life following a mantra of “You are strong. You are powerful. You can do anything. You are a winner.” In reality, she is a maid,involved in a dead-end affair with her married high school ex-sweetheart Mack (Steve Zahn), while taking care of her slightly broken, but not unfixable, family. Her son Oscar (Jason Spevak) has taken to causing trouble and licking walls at school, while her often-unreliable sister Norah maintains an unmotivated and angst-ridden personality. Her father, Joe, played by the talented Alan Arkin, is gruffly sweet, and also ambitious, but also damaged by his hurtful past of his wife’s early death. Despite the hardships of growing up without a mother, the two Lorkowski sisters tackle a new challenge in starting over with a business that ends up being more than just cleaning up after deaths. It becomes a job that encourages them to clean up after their own emotional pasts and find a way to move on.

The entire cast is sublime, no matter how large or small the role. They work together in sync with each other, creating such a smooth, emotional and smart chemistry that creates a natural flow in the movie. Clifton Collins Jr. is loveable as Winston, the helpful one-armed owner of a cleaning supplies store. Alan Arkin and young Jason  Spevak have a charming relationship as grandfather and grandson, working off of each others idiosyncrasies to create multiple laughs. Amy Adams is wonderful as heart-wrenchingly sad, but ambitious Rose who wants nothing more than to be someone she can be proud of, both for herself and for her son. Adams shows her vulnerability in the motel scene where she declares herself a “loser.” Audiences can find that they can sympathize with Rose. We have all been Rose at one point in our lives. But the true star in this film is Blunt as Norah, outshining the rest of the cast with her knack for maintaining a certain fragility, while still executing her subtle and charming humor, and her ability to draw in audiences with her aura. The sincerity in her performance is contagious to the audience. She is vulnerable under her faux-shell as a young woman longing for the chance to connect with the mother she barely knew. But life is all about new beginnings flowering from hard, dirty messes. It’s about shaking off the people who bring you down, and sticking with your own power to discover your full potential to make yourself better.

One slight irk I had with this film was the lack of story development in two relationships in the film. Mary Lynn Rajskub plays Lynn, the daughter of one of the crime scene victims that Norah tracks down and befriends. What had so much potential to be an interesting sub-plot of character development and friendship is cut short and leaves a dull snub of disappointment. You expect to see something special blossom out of the more-than chance encounter between Lynn and Norah, but instead, the story never quite finishes, and fizzles out. Another is the story between Rose and Winston. I personally wanted to see more of a self epiphany out of Rose. I wanted her to realize that she deserved better than an affair with no possible happy ending, and that she could find true companionship and maybe even love, with the character of Winston.. But despite those two minor irks, the film has all the aspects of a winner, with real and poignant substance, supreme direction, and a effortlessly talented cast.