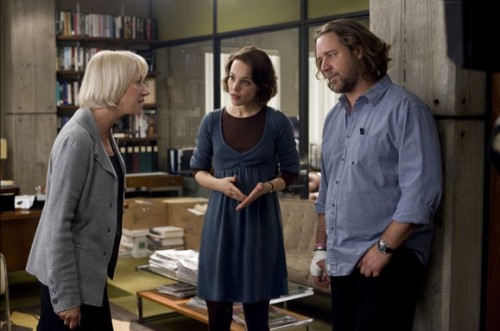 Performing his best Alan J. Pakula impersonation circa 1974, director Kevin MacDonald’s latest offering addresses journalistic integrity in the wake of political decay and corporate conspiracy before surrendering complex social commentary to cheap plot twists and easy resolutions. In the midst of congressional hearings into PointCorp, a Blackwater-esque overseas paramilitary operation, committee chairman Congressman Stephen Collins’ (Affleck) lead researcher is struck and killed by a Washington metro. Collins’ public display of grief at the loss of his staffmember brings forth a torrent of allegations regarding his extramarital relations with her.

Publicly discredited and grief-stricken, Collins turns to his former college roommate and Washington Globe reporter Cal McAffrey (Crowe) for spin control. As Cal begins to investigate the dead staffmember in order to restore Collins’ public image, Washington Globe management send in plucky blogger-turned-journalist Della Frye (McAdams) to actively damage it through her sensationalist columns about the congressman’s failed marriage in order to sell newspapers. Yet, both Cal and Della begin to realize that this story involves a conspiracy on an unprecedented scale. Personal loyalties are torn by ethical professionalism against a backdrop of corporate media takeovers and auctions of civil liberties.

Condensed from a six-hour British miniseries, the first ninety minutes of State of Play easily rank among the 1970s political thrillers it so desperately attempts to emulate. Yet, with integrity at the crux of the film, it is ironic that the filmmakers sacrificed the final act of their film for an unnecessary payoff with a plot twist that degenerates into misanthropy and negates the social commentary they worked so hard to achieve. Great political thrillers, while unique to the era in which they are filmed, are timeless. This film could have been this generation’s answer to The Conversation or The Parallax View. Instead, we receive an entertaining, yet forgettable way to spend two hours.