Superimpose Shannon Perry over George Washington’s facade in Emanuel Leutze’s venerable painting, “Washington Crossing the Delaware” and call it a day. The Seattle-based artist, musician, and community leader is at the forefront of important discussions, including that of equality, sociological wellness, women’s rights, and positive body image. She imbues her exchanges with levity and self-awareness, while also booting sexism and patriarchal bullshit with determined swiftness. Perry is a style icon: Think Lizzy Mercier Descloux by way of The Slits. But she’s also a business owner (Valentine’s Tattoo is one of the most revered shops in the Pacific Northwest, and is visited by local musicians and community trailblazers alike). “I like to put a wink in most things, because humor is one of the only ways to cope with the strangeness of existence,” said Perry in an interview for Got a Girl Crush. “It took me until my thirties to become this comfortable with myself, and I’m having a blast shouting into the void. It’s very cathartic!” 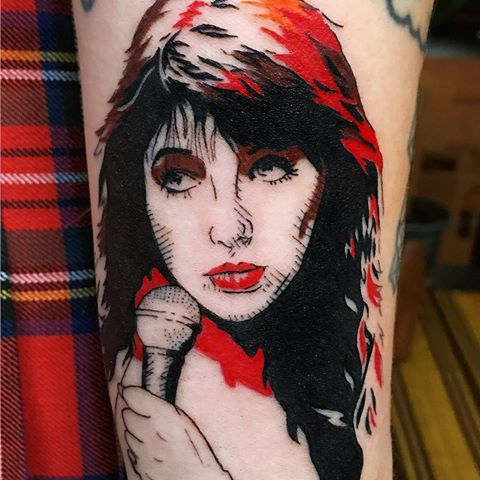 In staying with her sardonic, life-affirming, and DGAF attitude, she walks a tightrope between photo-realism – her watercolor portraits are beautifully nuanced – and chaotic, yet equally skilled, caricatures. The eclectic portfolio of styles that Perry brings in her bookbag are perceptive, transcendent, and emotionally moving.

The ultra-talented artist is also a vehement, tongue-in-cheek, wildly eccentric musician that isn’t afraid to peer into the void. As the lead singer of the band Gazebos, Perry admonishes plain yogurt existentialism, and instead bends the fork on youth, confusion, and culture. Making the space in front of herself malleable onstage, Perry engages the audience with a bevvy of vocal tics, hand gestures, and mercurial movements. Much like her formal art, there’s room for comical aloofness and deft craftsmanship. Every vocal hiccup or shout, subtle intonation or chorus has a line and reasoning.

Perry has the ear of important movers in Seattle, from author and queen of civilization Lindy West to Jen Graves of The Stranger – the visionary poet and hyper-skilled tattoo artist is the real deal, and respected by all.

Shannon Perry as seen on Popthomology.com

Because Perry is one of my heroes (how can she not be everyone’s lighthouse in the abyss of bullshit that is 2016? This year is like the third act of “The Neverending Story” where good people are being sucked into space, and wolves are showing their fangs in rotted out caves. What the actual fuck) it’s easy to write this commentary. I’m sitting here so excited that I’m basically a gif of Angelina Jolie in “Girl, Interrupted” when she’s spinning in a chair, wildly. Assistant editor Andy Ferguson is looking at me from across the room as if I shotgunned a quart of granulated sugar.

My advice for everyone is to listen to “Die Alone” by Gazebos while lighting a candle and drinking a half-gallon of chocolate almond milk. This sounds very specific, but it’s super therapeutic in this garbage cyclone of Donald Trump soundbytes (he’s basically just the villain in Ridley Scott’s “Legend.”). Hopefully next year there’s a passing chance that I’m able to book an appointment at Valentine’s Tattoo – Gazebos follows me on Instagram, which makes this dream-like situation .04% more feasible. Here are tattoo considerations: Rooney Mara sending back an order of creme brulee; Lydia Lund taking a selfie; Jason Baxter posing in a b-boy stance; Samantha Urbani in 2012 at Primavera Sound in Barcelona when she had purple eyebrows; Mary Anne Carter’s “Femme Manicure” design; or two fingers making a Tech deck ollie. We’ll see. In the interim, I wholeheartedly suggest that everyone check out Shannon Perry’s immense catalog of work. I don’t know what else you want from me.