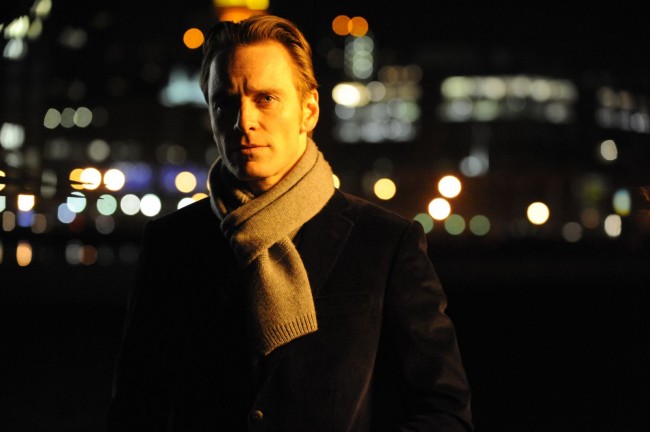 If you look under the hood of most movies this year, Michael Fassbender will be there.  The thespian has completed period pieces, comic-book films, biopics about bearded psychoanalysts, and now a film about a vacuous thirty-something whose pilgrimage across the bodies of women everywhere has left his mind burning like the Hindenberg.  The photo that accompanies this review isn’t taken from a Sears catalog, but instead from director Steve McQueen’s newest picture, “Shame”.

The film revolves around Brandon, a man who has the circulatory system of a storefront mannequin. Our pseudo-protagonist is a misanthrope wrapped in winter clothes. The guy wears his scarf like a noose. He is compelled to have intercourse with women, even if he finds it distractingly unpleasant. Brandon’s alpha male persona makes the rest of his day-to-day activities seem rudderless and without forward momentum. Does he want to become a better person, is what the film asks, as we watch him throw his moral compass from a five story building.

Aside from Brandon’s brain being a malfunctioning hub for the rest of his body, he has to deal, somewhat impatiently, with his mercurial sister, Sissy (Carey Mulligan), whose arrival is about as pleasant of a surprise as an iceberg to the hull of an oceanliner. The doe-eyed Sissy impedes on Brandon’s lifestyle of wireless internet pornography (this guy’s computer must be a practicing range for internet hackers everywhere). The movie’s screenplay is of the minimalist kind, with much of the action taking place in Brandon’s unsettled eyes and furrowed brow. Brandon is a miscreant, a villain whose inner flame of human kindness isn’t being fanned so much as snuffed out. He is a character that would seem hatched from the limbs of the Bateman family tree (“American Psycho” and “The Rules of Attraction”). In fact, maverick creator of apathetic antiheroes, Bret Easton Ellis, is probably trying to decide if he should take credit for the maladjusted Brandon.

Steve McQueen directed “Shame” with a paint brush the size of a Buick. There is little humility in the way he paints, etches, stamps his name all over the film’s languid shots of depression and emptiness. McQueen’s last film, “Hunger”, was a masterpiece of artistic expression. A fusion of an arthouse maniac and a carefully observant auteur. The scenes in that particular film were bruised and frayed. Think Lynne Ramsay on a diet of Kelly Reichardt. “Shame”, on the otherhand, while not being a junk pile of pretension feels like forward progress by way of stumbling. There is little grace, restrained anger, or palpable camera positioning. When watching the film it’s easy to see McQueen’s tool kit lying around, idly, in every scene – the director wants you to know he’s there. Make no mistake that McQueen is easily one of the most important directors currently making pictures, but this film is more of a mirage of his talents than it is an oasis of them.

Fassbender turns in a performance that is aptly downtrodden, withdrawn, irritable and ravenous. The actor has a steely disposition, that is inherent to his face, and he uses his features to carve any humanistic qualities out of his body. Brandon is the skeletal remains of a person – he is simply not living anymore. Carey Mulligan, in her limited screen time, shows great discord in her speech and posture. She is the perfect Sissy. A meandering puppy with snow globe for a brain. The actors do fine in their respective roles, but the film itself is inert and moribund. The only thing that was edited out of Shame was the editor himself.

I believe in Fassbender and McQueen, but they could never win a three-legged race (and that’s what this film feels like). Instead of tattling on this particular movie, I should advise you to see the triumphant “Hunger”. There is a well of beauty and heartbreak in McQueen’s mind, and I’m hopeful to see it better channeled in the future.