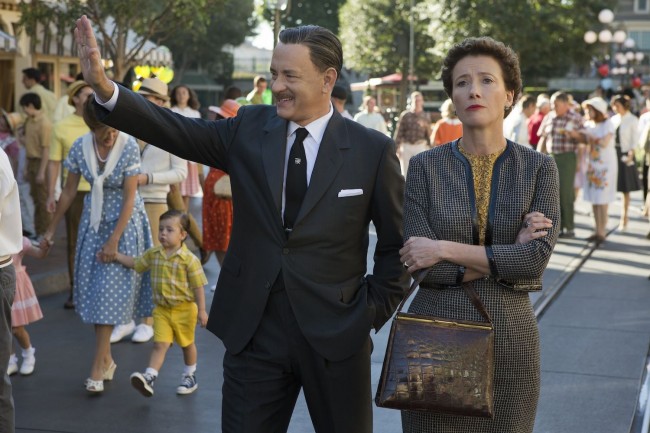 Saving Mr. Banks is about the daffy, carbonated personality of Walt Disney and the buttoned, stiff-shirted sensibilities of author P.L. Travers (don’t you dare call her Pamela, or she’ll have biblical hornets descend upon you). Of course the emotionally marred, stuffy protagonist ends up rosy despite her thorns by the end of Disney’s new picture – it’s not really a spoiler, unless you’re unfamiliar with the Mary Poppins brand.

Director-for-hire John Lee Hancock asphyxiates the film in pixie dust at every turn to remind you that Mickey’s bulbous gloves are around your throat. Even the depressing maladies that bruise P.L. Travers’ childhood are perforated by Disney charm. Alcoholism, while a decidedly painful affair, is treated like a diaphanous meal break until the next joke can be made. Going into the theater, you have to understand that Saving Mr. Banks is a saccharine spritzer that will make middle-aged audiences coo because of its innocuous narrative. Other demographics – children and general audiences – will be mortified by the cliche tripe that faces them. This relentless borefest has to be scarier than Escape From Tomorrow, the hallucinogenic phantasmagoria that was filmed at Disney World without the park’s consent. Screenwriters Kelly Marcel and Sue Smith must have had their hands tied while penning this screenplay.

For his part, Tom Hanks plays Walt Disney as an enterprising manchild with the energy of a spring loaded Jack-in-the-box. The affable actor gets to play a giant kid for the first time since Big, and he hams it up with all of the breath he can cull from his animated lungs. The performance is fine, but several scenes, due to the script, require Hanks to vociferously yell while riding carousels or smile, creepily, under duress. Each of these things makes me uncomfortable. Meanwhile, Emma Thompson is craggy and verbose. She does a magnificent job of portraying a wilted, finger-wagging woman at the end of her financial – and social – rope. Elsewhere, Paul Giamatti reprises his role as relatable supporting character.

Saving Mr. Banks is too tethered to the Disney machine to offer an objective look at P.L. Travers and her spirited exchanges with the company’s namesake. This film had twelve dozen safety nets attached to it before the pen even christened the paper. And when Hancock attempts to show the malaise of Travers and her childhood, the movie becomes inert. It’s as if the cinematographer was Medusa. If you have a grandparent in town that has seen approximately three movies in the last decade, Saving Mr. Banks may siphon a tear or two out of their ducts, but otherwise you would be well advised to bring a travel pillow.