Murder and Romance in Vienna 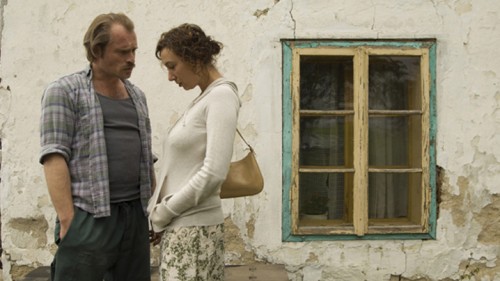 Revanche is one of those films that’s incredibly hard to describe because not only does the storyline cover a lot of material, but there are at least a dozen different themes and motifs at work in the narrative.  Director Gotz Spielmann, who admits that he “likes a lot of emotions, [and] hates kitsch and sentimentality,” understands the power of themes and tones within a film, and while he overplays the “hidden meaning” of the film, he uses his understanding of theme to intensify the emotions and tone already present in the script.

The two central characters (more-so in theme and effect than scripting and screen-time) are Alex (Johannes Krisch), an ex-con who works at a Vienna brothel and has fallen in love with one of the prostitutes and Robert (Andreas Lust), a Vienna police officer.  Understanding that the brothel is no place to nuture a relationship, Alex realizes the only way to escape the world he and his love have found themselves in is to return to crime.  He then robs a bank, during which time his lover is shot and killed by Robert.

From that point on, the story revolves around the subtle escalation of the two men, who rarely see one another, to the culmination of Alex’s ultimate choice: whether he should take revenge and kill the man who shot his lover or look for a deeper meaning behind the tragedy.

Story arcs and subplots are carefully weaved throughout this central theme, including forbidden romance, reunification of the family unit, and the true meaning of justice and revenge.  The result is a line of narrative thick with tension and swelling with conflict.  The storyline becomes a powder keg, and the audience is left on the edge of suspension, always wondering when the match is going to strike, resulting in one massive, disastrous explosion.

The acting is among the best I’ve seen in foreign cinema.  The performers are able to adapt their actions and dialog and develop their roles into true, distinguished characters.  Even the script plays to the extreme definition of characters, as actions and vocal cues become the traits to represent each personality in the picture.  Everyday actions such as chopping wood, jogging, or playing the according transcend their mundane base meanings and become characteristics, symbols that represent their respective characters and the role said character plays in the grander tapestry of the story.

Each of the performers take the script and handle it expertly, bringing their subtle cues and representative actions to the foreground of the scenes.  Through these simple actions, the performers are able to express a great deal without physically saying anything.  When it comes to the performances, the spotlight is easily cast onto Johannes Krisch, who’s carefully tailored appearance and posture work to build his character.  Krisch handles the drama and latent emotions of his role with a type of subtle sophistication, creating one of the most believable on-screen transformations I’ve ever seen.

Although the story is wrought with so much tension and the narrative is lined with several subplots, the pacing becomes stiff and sluggish early into the film.  This is because the filmmakers take great liberties with scenery shots, using them almost every time the location of the scene shifts, regardless if we’ve seen said locale or not.  The film becomes tied down with redundant minutes of exteriors, usually of deep forests and placid lakes.

However, with a patient eye and an understanding of foreign film, the small problems in pacing and editing can be easily overlooked.  Revanche is, more than anything, a nearly perfect example of how expressive film truly can be with a careful eye and diligent direction.  It will be an easy favorite of fans of foreign film and a great starting point for those still unfamiliar.