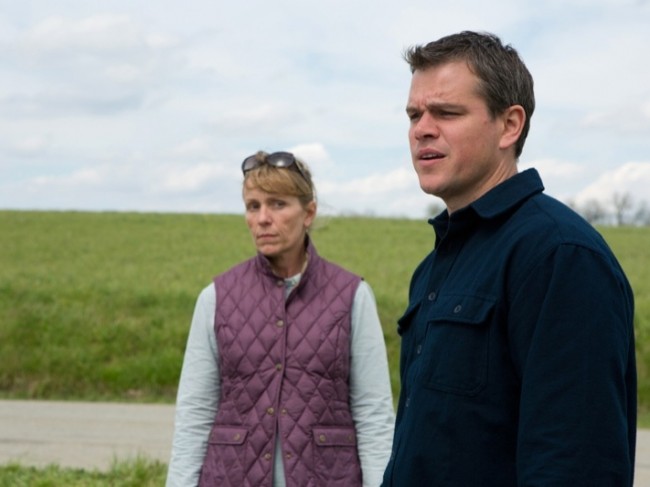 This year’s annual Gus Van Sant social issues offering Promised Land, based on a short story by Dave Eggers and scripted by co-stars Matt Damon and John Krasinski, explores the complex issue of hydraulic fracturing (AKA fracking) which extracts natural gas deep below the earth’s crust while simultaneously polluting groundwater. The titular land refers to a small town in Pennsylvania where recently-appointed natural gas VP Steve Butler (Matt Damon) and his colleague Sue Thomason (Frances McDormand) attempt to purchase drilling rights from failing farm owners. Steve’s hometown in Iowa went bankrupt after the closure of a major factory and, as a result, he firmly believes the money he brings these small towns is morally good. However, a night on the town with comely local schoolteacher Alice (Rosemarie DeWitt) throws Steve off his presentation to the townsfolk who subsequently decide to hold a vote.

Enter environmentalist Dustin Noble (John Krasinski). Dustin serves as the affable foil for Steve as he blames fracking pollution for destroying his family’s farm. The two engage in a propaganda battle for believers based upon the image of Dustin’s destroyed farm. However, for Promised Land to avoid becoming a leftist screed, Van Sant takes great pains to portray Steve as a fundamentally-decent man despite the fact that he managed to become an executive in a multi-billion dollar natural gas firm while disregarding any knowledge or understanding of pollution concerns as a result of his work—making Steve either a moral dope or disingenuous. The boundaries of credulity are stretched beyond their limits once the twist involving the truth behind Dustin’s family farm comes to light, resulting in a film too implausible to be effective as a piece of agitprop or as a proper narrative. Perhaps Damon and Krasinski should have drilled a little further.