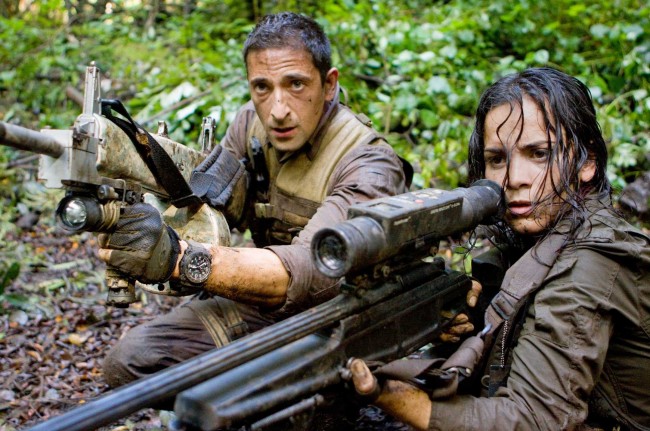 “Predator” has become such an outstandingly lucrative franchise since its inception as a sci-fi favorite in 1987. Who can resist a creature whose bulbous head protrudes not only pronged-teeth but dreadlocks the size of water noodles? And can I mention a forehead so sloped that a fourteen-year-old could do Tech Deck tricks off it for hours on end? Yeah, and if the physical properties of this volatile alien being weren’t impressive enough already, it comes with a helmet that the Rocketeer would be jealous of. And wait, it has a cloaking device! And…and…and! Well, you get the picture.

In “Predators,” we are finally given a direct sequel to “Predator” and “Predator 2,” although Danny Glover isn’t referenced within the dewy jungle walls of this particular film. Sadness ensues, I know. Robert Rodriguez produced the special effect bonanza, though the actual effects of the film seem like cut-scenes from a Playstation 2 game. Even more upsetting is the fact that the screenplay of “Predators” borrows many of the original movies most memorable scenes, this time gutting them like a poor karaoke rendition at a hole in the wall bar. But most of all, the casting of the movie is the most beguiling thing. Adrien Brody – who I initially confused as Adam Brody on the movie’s poster – lacks the body structure of an action star. And even when decorated with a machinegun the size of a tree trunk, he still looks peculiar in the role.

I suppose I should give details about the synopsis before I continue pouring on the criticisms, although I longed to repress the notion.

In a nondescript jungle, somewhere entirely unsafe, several dangerous people, from varying backgrounds, are dropped by way of parachute next to each other. They are all confused to as why they are there, especially when they do not remember being planted with weapons. Much of the globe is represented in the group, as “warriors” from places like Africa, Russia and Japan are hammered like stakes into the ground of this great unknown tropic. Fortunately for them, every character in the movie, no matter where they are from, can speak perfect English – how convenient. They eventually realize that, because of their precarious circumstance, they are being hunted as game for predators. Why the predators would pick special forces agents as ample prey is not beyond me; what is beyond me is why the predators would pick a 50-year-old cartel enforcer from Tijuana to hunt. One in the same, I guess.

A lot of standard action sequences transpire, including a ludicrous one where a Yakuza boss swordfights a predator in the middle of an open field. Another incident sees a convicted rapist stabbing a predator while calling him a homosexual slur. Obviously the screenwriting was done by thirteen-year-olds in between eating bowls of Spaghetti-O’s, otherwise there is no excuse for the lack of even semi-entertaining dialogue.

Action films don’t require a brain to operate, but they do require at least a sharpened blade. This one feels as blunt as a spork. If you’re going to kill people, you should do so in an interesting and creative style. Here, in the realms of the mediocre, everyone is eradicated in ways that we’ve seen about a million times before.

And what happened to the cast? Many of the stars in the movie look like they were chosen by spinning a bottle. Topher Grace, I assume, sounded like comedic relief; the one guy in the film that would putter about, nervously squealing, when he wasn’t making quips. But did we really need him? Adrien Brody, as stated before, looks more like a child on Halloween than a tough-guy. Then, more irritating than anything, there is another Michelle Rodriguez clone with a Devil-may-care attitude. These characters are stock.

Occasionally this film is unintentionally funny (whenever someone swings their fist it makes the noise of a jet engine), but mostly it’s too terrible to even laugh at. Can we just leave the first two films in peace?