The Evils of Uncertainty 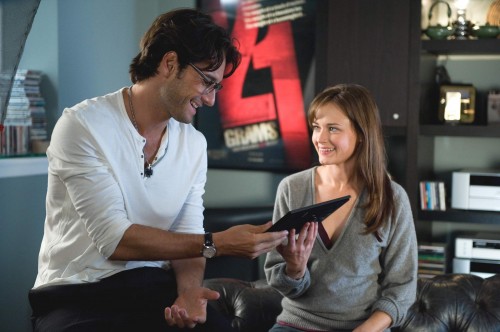 Oh, how terrible it must be for a college-educated 22-year-old girl struggling with unemployment. A piece of paper doesn’t guarantee a fancy high paying job that can take care of a rent payment on a luxury high-rise apartment. All those hopes and dreams shot down by reality. The writers of Post Grad’s script should go back to school when they tried making this comedy believable.

The life of Ryden Malby (Alexis Bledel) revolves around a master plan. Her plan was drafted in high school where she strived on getting good grades to get a scholarship into college. In college, her plan was to prevent the interference of beer pong from hindering her performance on maintaining her high grades.  Her plan worked for her until she graduated with a degree in English.

She thought she had the rest of her life planned out until her plan failed her shortly after her commencement. Reality hits naïve yet adorable Ryden when she was turned down at the single job interview for her dream job at Happerman and Browning, a leading publishing house in Los Angeles. Unemployed and broke, she has no choice but to move back to the nest.

Her parents Walter Malby (Michael Keaton) and Carmella Malby (Jane Lynch) strive on their Malby pride and welcome their post grad with open arms. The father is off adding other trades to his long list of occupations. The mother is still carrying her 8-year-old son, Hunter (Bobby Coleman) around like he’s still a toddler. To top it off, the snarky grandmother (Carol Burnett) spends her time shopping for funeral caskets while counting down to her death. At least death is something we all have to plan for. This household believes that being “weird indicates a creative force”. Except Ryden, who is trying to make her life as normal as possible.

Desperate for a job and purpose in life, Ryden avoids her focusing on her present life to prepare for future. Ryden looks so far ahead that she fails to see  Adam Davies (Zach Gilford) who is desperately trying to win her affection. Yet, she doesn’t look farther than across the street to stir up some spicy interaction with her neighbor, David Santiago (Rodrigo Santoro).

Meanwhile, Ryden ends up looking for jobs frantically and resorts to working for her father’s luggage store in sales. Ryden thinks everyone else has their lives planned out. Adam, her best friend, got into Columbia School of Law. Her Latino neighbor David works in arts. Even the valedictorian of her college and arch nemesis Jessica Bard (Catherine Reitman) stole her dream job as the editor’s assistant.

Everybody seems to have it all together except for Ryden. Little does she know that the aforementioned people are doing things that don’t make them happy. Adam has a passion for music. Her neighbor would rather be in Brazil with family than in the states. Jessica wants to run the world, not work under somebody.  Thanks to the Latino-lover’s advice about happiness she finds some sort of direction, “it’s not about what you’re doing; it’s about who you’re with while you’re doing it.”

Things miraculously start falling into place when the power-hungry Jessica Bard got the boot from Happerman and Browning. The new job opening gives Ryden everything she wanted. Her best friend and sudden love of her life moves to the other side of the country and Ryden is suddenly left feeling empty. Who knew her saucy Brazilian infomercial-filming neighbor would throw Ryden’s heart into Adam’s hands. There lies the dilemma: stay in LA and work or leave your dream job for your best friend who you have feelings for? After Ryden made her final decision, she lived happily ever after.. The ending is so predictable. Ryden changes her whole life around after getting advice from two men that lead her to another man.

Alexis Bledel’s bright blue eyes lit up the screen. Michael Keaton and Jane Lynch were there for comedic relief, as was Carol Burnett. Aside from the acting line up, the plot lacked originality. We have seen the college graduate seeking guidance. We have seen the nagging mother-in-law, Mr. Know-It-All father and overprotective mother. Then, the girl who worked hard to get everything she wanted risks losing it all over a guy. Really?? I was anticipating something new for 2009.

“Post Grad” was released at a perfect timing in this economy. The movie wasn’t original, but it was relatable to the audience. “Post Grad” is wholesome family flick but it is forgettable. There were a few scenes that were laugh-out-loud funny. Unfortunately, I yawned more than I was giggling in this supposed comedy. I think the genre for this movie had more of an identity crisis than Ryden did.