Home » Film » Out of the Furnace

Out of the Furnace 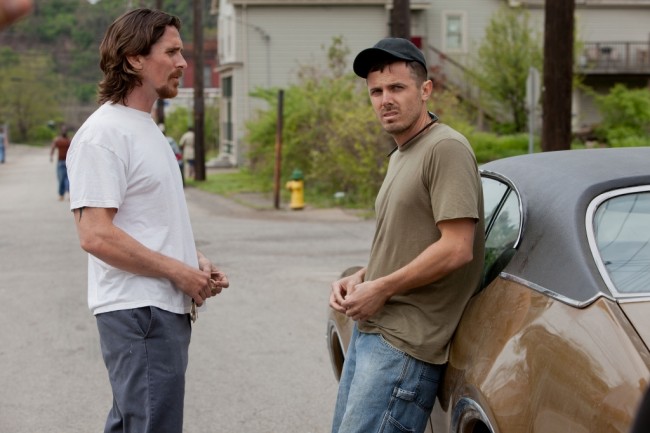 Scott Cooper’s windswept, booze soaked, throaty debut won the bedraggled Jeff Bridges an Oscar in 2010. Cooper’s opus, a film about a weathered country singer on the precipice of demise, was a minimalist project that worked because of the steel guitar twang and the gutsy, visceral performance of its lead. “I felt like if we could capture [Bridges’] loneliness in a starkly beautiful locale, such as the American southwest, we could capture the feel of something completely organic,” Cooper told me, describing Crazy Heart’s aesthetic as character. The same can be said for the gritty, barbed rust belt that the director sets his newest picture in. Out of the Furnace relies on welding sparks, sticky, stained shirts and plant infested, deflated tires. The scenery is important to the film’s main characters, Russell and Rodney Baze, two simple brothers trying to make a living in despondent conditions.

Russell (Christian Bale) works tirelessly in a factory, callousing his palms and grinding down his bones. Meanwhile, his brother, Rodney (Casey Affleck), back from four tours of duty in Iraq, is dealing the emotional malaise of post-traumatic stress disorder. In livid bouts of frustration, he courts danger by indiscriminately gambling when he’s not numbing his liver with spirits. The two brothers, born in the charcoal and pine tar of their hometown, have two opposing viewpoints on how to make a living. Eventually, after a drum roll of erroneous decisions, Russell has to pry his brother from the grips of a madman, played here by the stone-jawed Woody Harrelson. What follows is a sonnet of bloodletting and pockmarked walls.

Harrelson plays a lecherous sociopath with the morality of a saw blade. In his skewed wonderland of death and profit, he is the gavel. “I have a problem with everyone,” he says, in a syrupy drawl that could frighten the River Styx. This is one of the best performances of the actor’s career. Each line of dialogue is said as if it has a stick of dynamite attached to it. For once, Bale takes a backseat to someone he shares a marquee with.

Even Casey Affleck rises to the occasion. The actor manages to create a palpable sense of brow-knotted insanity. His sinewy frame bobs and weaves, later in the film, while ducking and punching in a primordial rage. The murmuring thespian actually channels a volatile, brutish persona that is atypical from the meek, puttering characters he usually plays. Affleck’s teeth baring anger and prideful intolerance is captivating and unnerving. Who even knew he had this in him? As far as everyone knew, he couldn’t raise his voice louder than the hum of a fan blade. Still, Tobey Maguire did it Neil Sheridan’s Brothers, and managed to emit falsetto howls of agony that made me more shocked than the character in Edvard Munch’s The Scream.

While the film omits information – it’s a solitaire game of Marco Polo at times – the mood is ever present. An omnipotent declaration of death and rust. As with Cooper’s Crazy Heart, the scenery and acting takes precedence over the story and situation. While this kind of flighty, narrative impotence can infuriate some, it’s hard to deny Out of the Furnace because of its hardbarked approach and venomous display of power. The acting is too spectacular, the atmosphere too brooding. This is a thriller that wants you to be hit by hot shell casings.