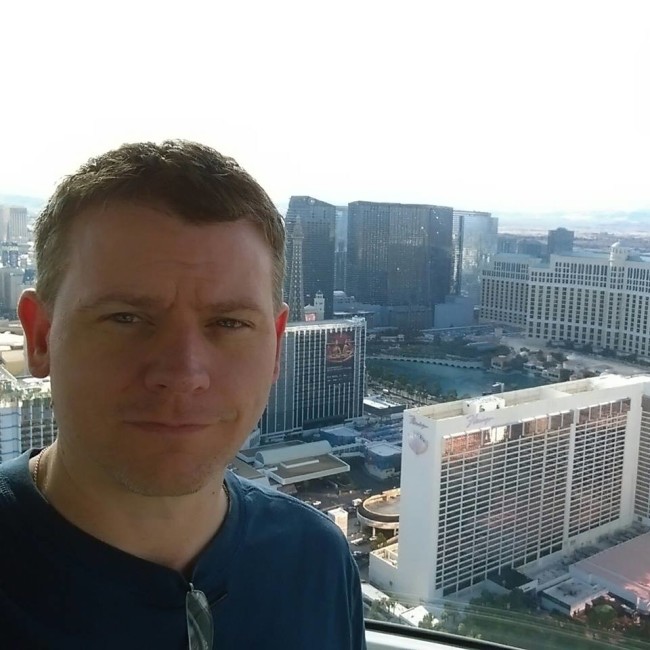 Aaron Peterson, the author of this article, and the man behind The Hollywood Outsider.

Another Oscar season, another 500 articles zipping around the interwebs with headlines proclaiming yet another ‘Oscar Snub’ for Best Picture, Actor, or Caterer. Sure, #OscarsSoWhite has taken over much of the conversation this year, but every winter brings similar cries for Oscar Justice, and what does it truly boil down to? When you drain all of the excess fluff – the politics, the lavish gifts for votes, the ‘controversy’ – what does it all mean for us as a society?

Not one single damn thing. Nada. Zip. It’s celebrity-obsessed nonsense and wouldn’t it be great – as a friend recently suggested to me – that when Chris Rock takes the stage Sunday night, he addresses this year’s batch of Oscar ills in front of a screen that is running scenes of refugee crisis camps, ISIS attacks, and global climate concerns, just to remind us all how pathetic and shallow we as a species have truly become?

Am I proclaiming that racism doesn’t exist in Hollywood? Of course not. You’ve got people whiter than Casper playing Egyptians on an annual basis, there is definitely an issue.

Am I saying Hollywood doesn’t favor certain actors over others? Of course not. If you think Bridge of Spies would have landed a Best Picture nod without Spielberg at the helm, I’ve got some gorgeous beachfront property in lower Iowa you might be interested in.

Am I implying that money is not a factor here? Of course not, are you insane? If money didn’t matter, you wouldn’t see Harvey Weinstein out there selling his first-born for a nomination every single year. Seriously, how many first-borns does this guy have?

So if I am not saying any of that, what am I saying then? I’m saying none of it matters because as a society, we have far more important things to worry about, so a fancy awards banquet none of us are invited to really should not receive this much attention. But, since you insist on obsessing over it, know this: All of those gripes and complaints? It’s BS, all of it.

A ‘snub’ is essentially a rebuff. It means this league of voters, these thousands of dedicated artists (well, most claim to be anyway), these professionals – they all worked in collusion to ensure Ben Affleck wouldn’t receive a nomination for Best Director of Argo? This town full of egomaniacs and slave-traders, who cannot even work in unison on competing genres (Armageddon and Deep Impact coming out the same year say hi) – These guys gathered together in some smoke-filled backroom to pool together and finally put a stop to the rise of the Almighty Affleck?

C’mon! I realize that claiming favoritism or racism generates website clicks and furious discussions among fans, but does that really feel like a sensible conclusion to you? That so many people would actively gather to thwart a single member’s nomination? This applies to the argument of a racist board as well – Do you truly – if you take your anger and contempt for the very real race issues occurring in our country – do you sincerely believe the most liberal and forgiving organization in America – Roman Polanski, Woody Allen, Mike Tyson gets work for crying out loud – is grouping itself in an attempt to ensure not a single actor of ethnicity receives a nomination? I completely understand why you would be led to believe this, the way the media uses this topic to get our emotions fired up and incite our rage, our comments online, our clicks in their data banks – but do you actually believe it?

For this writer, I simply do not believe that the entire Academy of accomplished actors, artists and producers, have banded together to ensure only white people named Tom Hanks and Martin Scorsese receive Oscar nominations. Nor do I believe they are working overtime to gather under the cloak of darkness to hammer out ways to keep Affleck and Leonardo DiCaprio away from the stage. This is not naiveté nor is standing ignorant in the face of the truth. This is me taking out all of the hyperbole and looked at it with just the facts in front of me, no rhetoric.

I know what a few of you are thinking: So how can I possibly explain the lack of diversity the last two years in acting nominations or how do I explain why (insert your favorite performance here) was not recognized? Is that not a ‘snub’?

No. Should Hollywood employ more people of color? Absolutely. Do you know why they don’t? Why they really don’t? It’s not racism, it is marketing based on our racism. Yes, I know this is an opinion that will make many raise their hands and toss me death threats, but hear me out. Hollywood is greedier than Donald Trump and Big Tobacco combined. Every single decision is based on two things: Art and commerce. Is it artistic and can it make money, but especially – can it make money?

Can they spend millions of dollars and recoup this investment, possibly even make a profit? It’s a business, they’re not in it just to win awards. So for decades, we have had men and women behind a desk doing absolutely nothing except running statistics, charts and demographics. What sells, to whom specifically, and when. Everything from age and color of the actors, to locations, all the way to the length of the film – everything is being picked apart to find that most perfect combination, one that guarantees a windfall of profits. The marketing reflects society, which does have racism sprinkled throughout on all sides of every issue, and it is almost always the driving factor in hiring decisions.

Why can’t Idris Elba play James Bond? Because marketing looks at it and sees many people would not pay to see it. Is that true? I personally would watch an ostrich play Bond if it was compelling enough, as would you most likely, but the marketing doesn’t care what Aaron or Joe Reader thinks. They live to serve their masters, therefore they only care about the millions that – according to their detailed research – physically buy tickets and what topics trend on social media. They are who movies are made for. I’m still shocked 12 Years A Slave didn’t feature Chris Pratt in a cameo as some sort of white savior…wait, that was Brad Pitt. Never mind. Carry on.

Every part not firmly rooted in history or already defined by their ethnicity in previous works should be open to any actor – without-a-doubt, there is no debate from me, and I’m not just saying that to keep antagonizing comments at bay – but marketing is just not wired that way. It is this mentality of commerce, this Hollywood-By-The-Numbers, which has led to a disturbing lack of solid roles for people of ethnicity, which in-turn has led to the lack of nominations, not blatant racism in the nomination process. This ole’ Hollywood marketing is inherently the problem that needs to be addressed and desperately updated. If you want change, it needs to start there, with the producers and directors that you idolize that are doing the hiring.

There is also a larger issue today due to that old trouble-maker on the block, the internet. It gives so many people a forum to express their demands, to unleash their rage, they begin to believe their opinion should actually determine the outcome. Hey, I get it. I’m still pissed Ex Machina and Straight Outta Compton failed to receive Best Picture nominations. They absolutely deserved the recognition over a snooze-fest like Brooklyn…to me.

That’s just it though, this is my opinion and mine alone, not the Academy’s. Entertainment Weekly and Variety have their favorites too, but that does not necessarily mean the Academy agrees, nor should they. At your job, if they have an annual awards banquet, do you want the ‘Employee of the Year’ handed out by a bunch of random couch potatoes who don’t actually work there? No, you want them doled out by your peers, the people who know exactly what it took for you to accomplish the impossible. The Academy has a much more public position, but this point remains very much the same.

There are a thousand awards shows now for film and television, and that is great if you’re a fan of 12-hour red carpet events and incessant adoration for every actor with a British accent. (If you’re not a fan of awards shows in general, well why bother reading this? Just to bitch about how pretentious the Academy Awards are? We get it hipster, move on.) For those of us that do love the Main Event, nothing compares to The Oscars because it is the only ceremony that awards the best in the industry by a vote of the very members who contributed to it.

As much as we all believe we have a say in how that unfolds, it’s as much movie magic as Vin Diesel wrestling a Tyrannosaurus Rex on Mars. We, the public, do not factor in the results, we have no input whatsoever, and nor should we. We just happen to revel in the possibilities because we love and admire the work they produce, yet that affords us no right to scream and demand who should or should not receive accolades for those efforts. We all completely agree that Saving Private Ryan is a far better film than Shakespeare In Love – even Affleck knows this to be true – unfortunately, The Academy feels like they know better than those of us sitting comfortably in our lounge chairs passing random judgements from afar, and they decided to go a different way. We call it a snub, they call it selection. So be it.