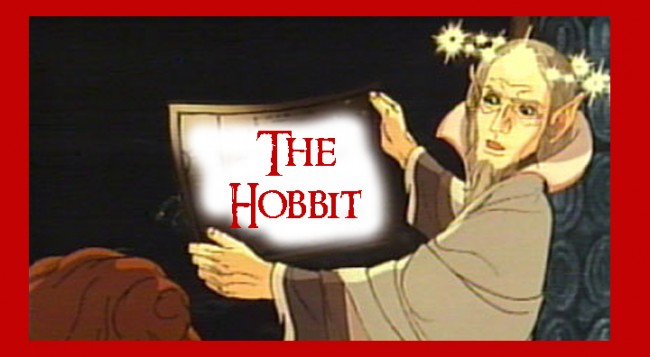 I was initially planning to do another B-Movie review this week, but decide to do an old-school movie review instead. There’s a fine distinction between them sometimes, but in this case I couldn’t classify the film in question as B-grade material. Mostly it’s just… horrible. Plain horrible. Just not due to budgetary reasons. Purportedly this thing cost 3 million dollars.

I am, as the above banner indicates, talking about the 1977 animated TV movie “The Hobbit.” It seemed appropriate to visit the film, since a live action version is currently inching its way into existence under the banner of Peter Jackson (though oh! to have had a Guillermo del Toro Hobbit!).

I now thoroughly regret my decision. I had never seen the cartoon before, and now I can never again return to my once blissfully ignorant state. One hour and sixteen minutes ago I was a happier person. If only I had realized…!

Rankin and Bass also gave us the glorious likes of “Rudolph the Red-Nosed Reindeer” and “Santa Claus is Coming to Town,” but don’t be fooled! The songs in those films were catchy childhood classics. The songs in “The Hobbit” made me bleed out of my ears.

Before you bust out the revered tomes, hear this: I understand that there were a lot of songs in the book. I do. But frankly, I skimmed over those bits, and even if I had read them word for word, I certainly didn’t have to LISTEN to them. Now I shudder to think of what an audiobook version of the Tolkien classics might sound like. Don’t even tell me, I don’t think I could take it.

In mild defense of Tolkien, the most agonizing song of the movie, “The Greatest Adventure,” was the one that was NOT taken from lyrics in the book. Unfortunately, they play bits of the song continuously throughout the film. “The greatest adventure… is what lies ahead!” Arrrghhh!! There is a decent chance you’ve heard the warbling tune somewhere else; the show “South Park” did a bizarre parody of the song in the episode “The Death Camp of Tolerance,” except that it sings the adventures of the brave gerbil Lemmiwinks, and, well… look it up yourself.

As for the rest of the film… phew! I can only characterize it as a senile sausage fest. Just about every character is a warbling old man. Bilbo is the youngest of the lot, and he isn’t exactly a spry fellow. Whether it’s Gandalf (a demented cross between the Winter Warlock and the scary owl in “The Secret of Nimh”), Smaug the super-hairy dragon, any of the dwarves, Gollum the mumble master, the elven king, really ANY of them, they speak in confused warbling voices, totter around with osteoporosis spines, and often sport wispy old beards.

The only characters in the film that might possibly be female are the not-so-deadly giant spiders, and (you guessed it) they are demented old senile lady spiders that still sprout suspiciously beard-like hair. There is an entire village of human men, the leader of which has an intense 70s porn-stache. He violates the senior discount rule, but makes up for it by heavily reinforcing the sausage-only stipulation.

Gollum (now wholly amphibian) alternates between mumbling incoherently (I couldn’t tell you for the life of me what any of his riddles were) and screaming in old man rage. Gandalf gets crazy-eyed and calls up lightning any time somebody mentions he’s a wizard, and otherwise just disappears until he’s needed to deus ex machina up the joint. Elrond must have inspired David Bowie’s look in “Labyrinth” because he is mega glam-tastic (see banner above). The king of the wood elves alternates between a thick French accent and something that might be German, who the hell knows.

What else is there to say? I think all of that just about did me in. The only character I sympathized with was the Lord of the Eagles. Apparently Gandalf once healed an arrow-wound for the poor guy, and now he is doomed to answer Gandalf’s every beck and call. Don’t tell me the eagle forever helps him out of gratitude, eagles are freaking nasty. It is totally magical compulsion.

The Hobbit: or There and Back Again: or What Happens When Senile Old Men Hold Vast Magical Power (not a whole lot). 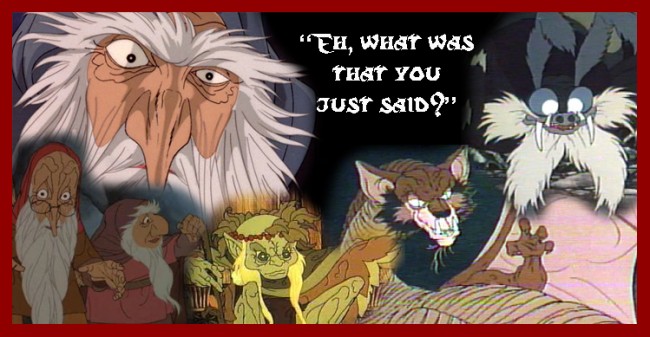