Just One Step Behind the Coen Brothers 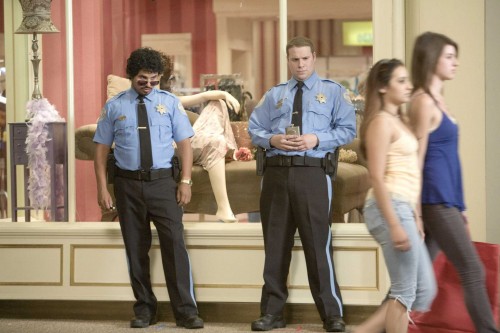 Seth Rogan is one of Judd Apatow’s boys.  Thanks to Apatow’s contributions to the comedy cannon, Rogan was shot into the eye of the storm called Fame.  However, it’s no surprise that Rogan is looking to distance himself from Apatow – most, if not all, of Rogen’s popular appearances are Apatow films, a archetypical role that he’s quickly getting type-casted into.  So, if you are offended by the idea of a non-Apatow film led by a role that is very atypical of the usual Rogan performance, then don’t bother seeing Observe and Report.  It is easily Seth Rogan’s most distinctive performance, but it’s not like anything he’s done before.

Observe and Report is about Ronnie Barnhardt (Rogan), a bipolar mall security guard, and his dreams to become something greater.  I know what you’re thinking: “haven’t we seen this movie?  Wasn’t Paul Blart: Mall Cop the same story?”  Well, no.  This film, while similar in basic premise, is wholly different than Paul Blart.  Sure, there’s the basic love interest, Brandi (Faris), and there’s an obstacle in front of every effort Barnhardt exerts, just like in Mall Cop, but this film is much darker than the relatively upbeat Kevin James picture.

It’s dark, alright.  After an initial viewing, it’s seems very much like the filmmakers are trying to take their shot at a Coen Brothers style comedy.  All the jaw-dropping absurdity is present, the recognizable characters and the drab setting, but the filmmaking team, led by Jody Hill, make one fatal flaw.  Every time the material gets too intense, they seem to pull back and bounce back into an Apatow-like comedy mode.  For the entire span of the film, the director can’t decide if he wants the Coen Brother’s gritty and rough comedy or Apatow’s smooth version.  This is easily the film’s greatest weakness.  When making a dark comedy, it’s all or nothing.  Otherwise, the audience grows annoyed of the filmmaker’s fear of getting too dark.  Here, the balance is clearly not achieved.

What’s even worse is the film’s downright lack of believability.  I can buy the struggling security guard story, I can believe that no one cuts him any slack and there’s no helping hand being held out for him.  But the suspension of disbelief is shattered when he marches into a police station and proudly exclaims that he’s killed six people (crack-fiends, sure, but people nonetheless) and no one slaps the cuffs on him.  This sort of thing, these tireless sessions of misguided violence, happen often in the film, and while they look amazing and are worth a few cheap chuckles, the audience can’t help but think “man, this guy’s going to face some serious repercussions.”  But he never does.

Often times the story is flat-out depressing.  We see a man who is pouring his heart and everything he has into what he does, a man who is trying his hardest and has a sincere passion, and at every turn, we see the brick wall he’s speeding into and we know he’ll never achieve anything, he’ll never get what he wants and, unfortunately, he’ll never grow.  The film ends exactly so, with absolutely no character growth in the main protagonist.

For the most part, I can’t say anything negative about the cast.  A majority of the cast, led by Rogan, performed their roles admirably, remaining in the perfect range of believability, which was no small feat considering what the script gave them to work with.  The weakest link is easily Anna Feris, who, for some reason, seems like she’s in a state of perpetual belligerent drunkenness.  She seems to be constantly drooling as she spits, burbles, and shouts all of her lines and often times looks like she had a long night of partying immediately prior to shooting.  On the other hand, Ray Liotta’s performance, once again magnificent in check with what the script allowed, seemed rather limited and boxed.  Why bring in such a big gun if he’s only to be used in a handful of weak scenes?

In the long run, though, I think people are going to tolerate the lack of believability and the depressing tones in favor of the overall quality of the film.  The camera work is magnificent, music is matched perfectly to every scene, the actors handle themselves wonderfully and the whole project is obviously thought out very well.  And, I have to admit, that I got quite a few laughs out of the film as anyone else in the audience.  But the problem still stands that every time a great joke is told and we’re laughing, Ronnie Barnhardt either beats up a teenager, threatens to kill someone, or actually goes through with the murder, and we just don’t know how to take it.  If this weren’t so, if the tone of the film had remained constant, I would have easily given a three out of five.  But it didn’t, so I’m forced to render this verdict: