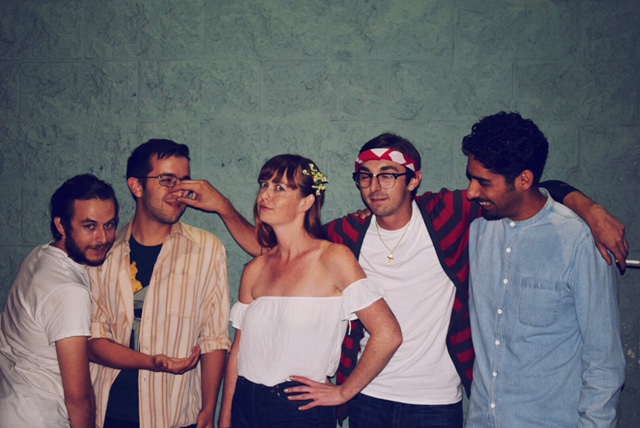 With NSTYLDY, there is a distinct sense of peril, aggression and joy

There’s a wounded, almost dystopian, marriage of harmony and discord on Citrus‘ NSTYLDY. The San Diego band has released a record where coziness and galloping aggression find common ground. But it all begins on the album’s final song. With “Amethyst Outro”, vibe player Ian Harland tunnels into forgotten memories, thumbs through monochrome reveries, and waltzes, deftly, in a sort of François Truffaut-like gait. There’s something venerable and otherworldly about the composition. Trapped air from another time. It’s simple and almost paranormal at the same moment, a theme song to nighttime reflections on rainy evenings. Precipitation on stoplights. It’s this sort of intangible magic that makes NSTYLDY both thoughtfully engaging and transcendent.

The LP – masterminded by Katie Howard, Oscar Carrion, Andre Flores, Grant Glibert and Justin Joyce – mines for weathered recollections while affixing lights to prescient themes. Chaos and comfort courses through the veins of the album, specifically on songs like “Creature” and “Skyline”, where the listener is lulled into cerulean waters only to be rocked by wave breaks. It’s this sort of dichotomy that gives NSTYLDY its distinct texture and vibrantly stubborn cadence. The opening moments to “Cha Cha” see aggressiveness marbled with hot glass. It’s a fever dream of confusion and determination that takes hold on most of the opus.

What is most striking about the album’s hot tempered and loving compositions – horns as scalding as railroad tracks in the summer sun, drums as vicious as a lion’s incisors (I’m not even being hyperbolic) – is that there is a real sense of peril in the proceedings. While recording the LP, Katie Howard found guidance from the late-Jon Greene when it came to mastering the album and laying down vocals. The result has the singer’s voice tumble, sway, and roar throughout the album’s entrancing run-time. There’s both power and vulnerability, in equal measures, throughout NSTYLDY. Howard – who also fronts San Diego’s Big Bloom – submerges into every conceivable emotion on this debut masterwork. In what has been an endlessly frustrating year, here is a record, under an umbrella of dominance and unrelenting power, that provides a complicated volley of hope. An album that doesn’t shy away from struggle, love, or impeded roads. Along with Niki & The Dove’s Everybody’s Heart is Broken Now, this is the most essential album of 2016.