Home » Film » Not Fade Away

I Cant Get No Satisfaction 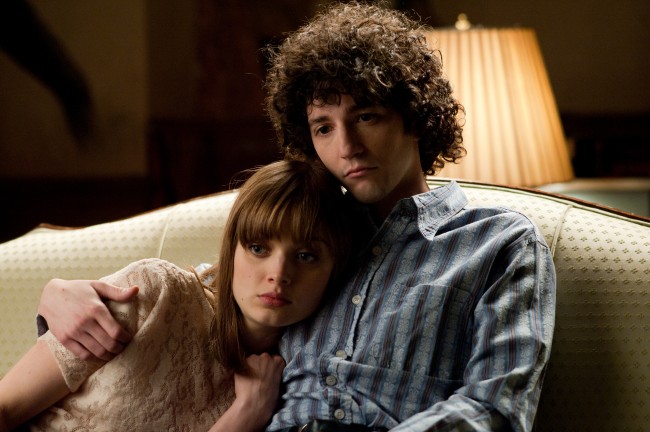 The Sopranos creator David Chase’s feature-length directorial debut Not Fade Away serves as both a love letter to the passion of 60s rock and a retrospective that wonders whether any of that passion mattered. These contradictory aims undermine each other in a narrative that inspires neither passion nor wonder as Bob Dylan impersonator Douglas (John Magaro) forms a band with childhood friend Eugene (Jack Huston) in 1960s New Jersey. Late night discussions of Chicago Blues versus Delta Blues and getting-the-band-together montages set to Bo Diddley stress the importance of rock and roll, however, stress within the band builds as Douglas usurps lead singer duties from his friend to gain the attention of his high school crush, Grace (Bella Heathcote).

Of course, Grace’s burgeoning sexual liberation challenges the limits of Douglas’ rock and roll attitude while the requisite “Parents Just Don’t Understand” plot line is held down by Douglas’ working class father Pat (James Gandolfini). These plots are frequently created and discarded which subsequently disrupts any emotional investment in the characters. When the time comes to get a recording contract, Douglas and company blanch under the suggestion that they work hard and play shows for six months first—despite having played together for several years at that point.

Not Fade Away’s teenaged frame narrator, and Douglas’ sister, Evelyn (Meg Guzulescu) drops this piece of earnestness about the power of music, “America has given the world two inventions of enormous power. One is nuclear weapons. The other is rock and roll. Which one is going to win out in the end?” While rock and roll still appeals to marginalized teens looking to create an image for themselves, the first nuclear weapons, much like Not Fade Away, were the result of unstable elements which split apart and dissolved into nothing.