Asphyxiated to Death by Feather Boas 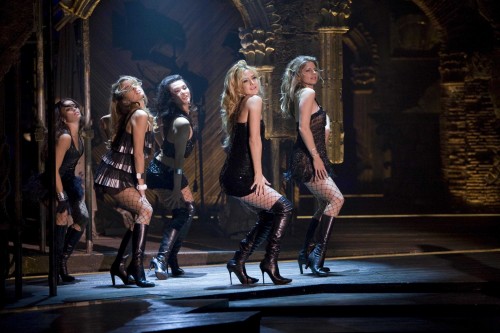 Rob Marshall’s loud, bombastic, incurably busy musical is a cacophony of ideas and blaring horns. The songs in the film sound, to be quite blunt, like mortar fire. Too many wordy verses, too many goofy choruses. “My husband is a director; he makes movies”, wails out the normally magnificent Marion Cotillard. Marshall’s last musical opus, “Chicago”, was a taut hit with audiences and critics. I, on the other hand, was left startled and bewildered by the gawky and squinty Renee Zelwegger, who winced throughout the movie like a scared beagle.

“Chicago”, with its breaking bulbs and high-strutting cast, went on to please most audiences – and despite me not being one of them, I could understand some viewers being lulled into the movie’s cackling energy, its sterling set design. Marshall’s newest crack at the musical genre, with this year’s Nine, trades in the “Chicago” luster and replaces it with woefully uninteresting set pieces and terrible costume designs. The movie revolves around international superstar director, Guido Contini (Daniel Day-Lewis), who stutter-steps around on his movie sets, wears glasses straight from the Jean-Luc Godard collection, and curls his spinal cord over in what seems like the worst posture humanly possible.

Contini is having, during the late stage of his career, a sort of emotional crisis; he summons his dead mother (Sophia Loren) in his dreams, and often calls over a plethora of singing women to his flat in Rome. Contini siphons the vigor and sultriness from the women in his world – especially his wife and muses – and turns their emotional viscidity into a kind of pulpy inspiration to make films. Lately, however, the acclaimed director is having problems with juggling the fluttering eyelashes and bow-shaped lips of the his relationships, and, even with his mastery of the film medium, he cannot seem to understand how to go about shooting his newest movie.

Throughout the boorish expose of musical sequences, each sung by one of Contini’s lively muses, we find out the aspirations and dreams of the characters in question. Marshall shills us to death with arrangements that, when compared to other musicals, look flat and unmanageably dull. Actresses such as Penelope Cruz and Marion Cotillard do their best to sing, flail wildly, and sensually writhe under the microscope of Marshall’s camera, but they fail to bale out water from this ship’s ill-fated hull.

Nicole Kidman’s portrayal of an Italian actress named Claudia is particularly offensive. Kidman’s china doll complexion weaves with her marble-blue eyes to make the most laughable – and unfortunate – of all Marshall’s casting decisions. Kidman warbles her voice to sound Italian; or, from what I can tell, something that sounds mildly like an accent from a nondescript European province.

It’s unfortunate, but, even with a forgiving eye, you cannot raise your glass to “Nine”. The marketing employs this weird kind of logic that they can wrap their movie’s cast up in a cute little bow, say how many awards they have won together in their respective careers, then expect everyone to be wooed by this inane factoid.  The reality is that “Nine” drags on for too long, does too little, then expects too much. I respect all of these actors and actresses, but I don’t necessarily want to see them subject me to a hodgepodge of forgettable music numbers being sung on grossly underdeveloped stage designs.

Interestingly, this movie had bushels upon bushels of actors and actresses attached to it. There was Catherine Zeta-Jones, Javier Bardem, Anne Hathaway, Sienna Miller, unnamed actor #4059, etc. to star in Marshall’s sluggish, portly musical. The problem is that, even with a revolving door of the greatest players alive, no one is going to improve the rotten direction and lackadaisical writing of “Nine”.

If you go, expect to see Fergie playing in a bed of sand; Daniel Day-Lewis climbing on stairwells; Kate Hudson doing a catwalk; and Dame Judy Dench, um, smoking.

I am reminded of what KPBS movie critic, Beth Accomando, had said when someone brought up this movie. And I quote.