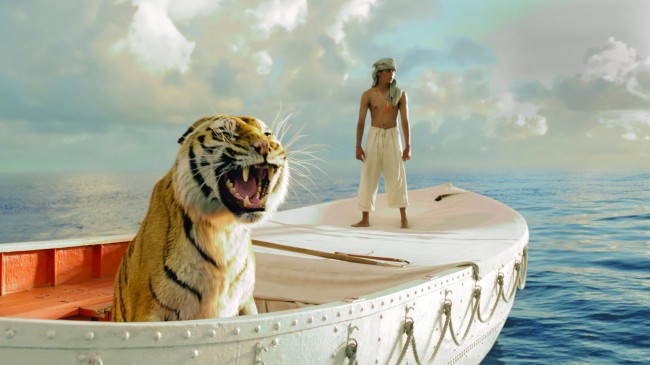 Director Ang Lee’s extraordinary adaptation of Yann Martel’s novel Life of Pi, previously believed to be unadaptable, covers much of the same spiritual questioning as Terrence Malick’s 2011 offering The Tree of Life without the irritating voiceover or Sean Penn’s confused meandering across salt flats. Told retrospectively using the helpful narrative device of a writer (Rafe Spall) who interviews the adult Pi Patel (Irrfan Khan) about his time at sea, Life of Pi recounts how the young Pi (Suraj Sharma) became a devout follower of Hinduism, Christianity, and Islam simultaneously while his parents owned a small zoo in French-speaking India. Faith versus reality develops thematically early in the film as Pi attempts to hand feed the zoo’s newly acquired Bengal tiger. Pi’s father, Santosh (Adil Hussein), rescues Pi and forces him to watch the tiger maul a goat. The lesson is clear: don’t project beliefs onto situations that will kill you.

When his parents decide to sell the zoo and move to Canada, Pi’s spiritual journey turns literal as the transport ship containing his family and all the wild animals capsizes. Life of Pi transforms into a Job-meets-Moses parable as Pi learns to share his lifeboat with the aforementioned tiger. Drifting across the open ocean, Pi’s multiple faiths are challenged by the starving Richard Parker and the sharks which encircle the lifeboat.

Director Ang Lee and cinematographer Claudio Miranda fully utilize 3D as a means of spiritual expressionism and deliver unbelievably impressive imagery of life at sea. Iridescent jellyfish and breaching white whales push the film in fantasy territory. However, when the adult Pi offers another, brutally realistic explanation as to how he survived at sea—subsequently challenging everything the viewer has watched over the previous two hours—the story the viewer accepts as true provides insight into the beliefs and faith of that individual, making Life of Pi an intensely personal experience. While the film is marred by the overly helpful writer who overtly explains the symbolism of the film as well as the narrative device of Pi’s journal that he loses at sea and, therefore, wouldn’t be able to use it to retell the story as an adult, the film accomplishes the questioning of faith in a way that will likely never be replicated.