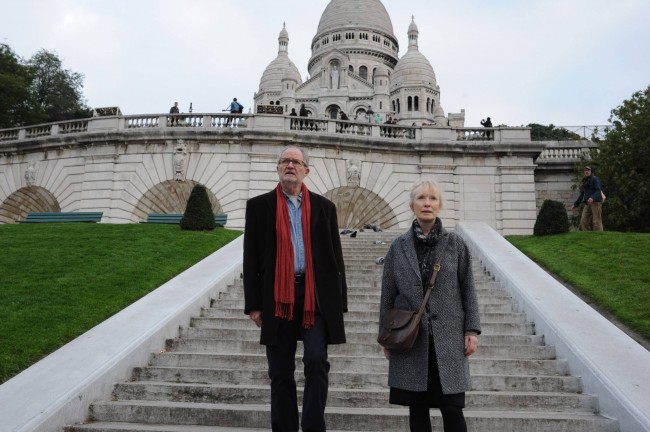 It’s possible. If you’re together with someone long enough, the sound of your beating heart will become the crack of locked horns. The coddling turns into passive-aggressive teeth baring, and the dinner utensils become primers for a joust. Shouting can be a sonic mosaic of guilt and resolute fear. But there is also kindness; calm familiarity and warm embers of flickering memories. Love can be a violent ebb.

Director Roger Mitchell’s film may seem like a wilted bouquet, but it’s romance through-and-through, even with its pin cushion presentation.

Revolving around two vacationing sixty-somethings, Le Week-End is a cat’s cradle of emotion. Paris, while a tangible entity, takes a backseat to the couple’s incessant roaring. Instead of the romanticized hotbed of beauty, the Eiffel Tower casts a long, asphyxiating shadow upon the married pair. Our two withering heroes eschew modest kindness and feed upon repressed rage. Henif Kureishi has written these characters are breathing, bruised people. The dialogue doesn’t have one semblance of artifice. There are no villains in this marriage, only two individuals fighting against time, against familiarity.

Mitchell’s opus has the lean, cool sharpness of a fine blade. Le Weekend-End is a cocktail of Two for the Road and Who’s Afraid of Virginia Woolf? The only difference being that it’s a sedated hornets nest, where the buzzing is heard, but no one is stung. Our protagonists aren’t intolerable, despite their myriad of problems, and that’s where the film succeeds – the dialogue refuses to indict anyone. The only hiccups occur when Jeff Goldblum appears on screen. The idiosyncratic thespian guffaws and spills anecdotes ever so cavalierly, but doesn’t seem to be part of the universe the movie is filmed in. It looks as though Goldblum is acting in a Wes Anderson movie, when, in fact, he is not.

Jim Broadbent’s dog-eyed, crestfallen persona is back with its expected staccato delivery. And though he doesn’t break any new ground, he’s always a joy to watch, even when he plays the obligatory doting husband. Opposite of the English actor, Lindsay Duncan proves to be deliciously acerbic. Ultimately, Le Week-End accurately asserts that, no matter where you are, you have to arrive within yourself first.