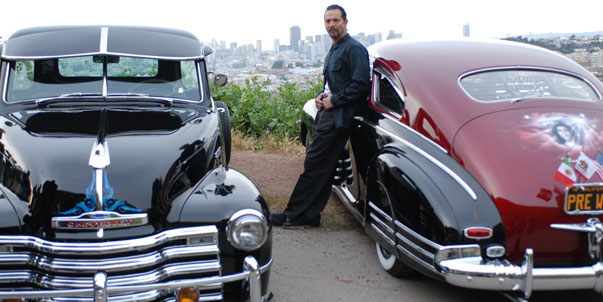 Che (Benjamin Bratt) has more tattoos on his body than Venice Beach has murals on its walls. The old man, maybe climbing the middle of his forties, is respected around his neighborhood in San Francisco; everyone nods to him, pushes their hand up to signal hello, or whispers pleasantries about his legendary status on the block. Che, in short, is the embodiment of a man whose personality thrives on a dichotomy of testosterone and skewed sentimentality. There is a code of class that the community’s father-figure feels everyone should coat their minds with, even if you don’t prefer to subscribe to his brand of hostile ethics. The only thing that Che cannot control, in his world of chiseled greatness and lack of malleability, is his son’s homosexuality.  In director Peter Bratt’s social commentary, there are themes of misunderstanding, malevolence, misanthropic behavior, solemn reflection.

When Che learns that his son, Jes, is homosexual, he unsheathes a furious drum roll of anger and anguish that blankets his own life and the lives of others around him. An affectionate but ornery man, Che is unable to cope with his son’s path in life, leading him to consider picking up a bottle and ostracizing those around him.

Some of the emotional jousting is executed with sharp accuracy, other times, when the dialogue flounders in what seems like contrived exchanges from the Lifetime Channel, the source material becomes trivialized and cheapened. Thankfully, the subject matter, due to Benjamin Bratt’s steely performance, elevates above most maudlin pitfalls. The teeth-clamping is frightfully authentic, especially when Bratt pummels his son as if his fists were two wrecking balls made of bone. The emotional bloodletting in this film is everywhere, as Peter Bratt spins his camera on scenes of hate crimes and repentance.

When the film is most impressive, it is focusing on the lifeline of the Mission district in San Francisco. The heartbeat is to the tune of Curtis Mayfield’s pulsating vocal tremors, while the veins are the streets in the area. Che and his bushel of friends send volleys of colorful, often times vulgar, words at each other. The crew is portly, fond of nice cars and lively parties, and respects family heritage. In some of the more vibrant sequences, we see Che, revealing bouquets of exuberance and happiness, as he flashes his cage of teeth when fixing up classic cars. In his community, low-riders are pillars of history; much like monuments in national parks are. The cars are lacquered with paint, handsomely crafted with personalized pictures, and driven slowly. “The thing about low-riding is that it’s not really about going anywhere,” Che says, lulling a smile from his face. “It’s about taking your time getting there.” Certainly, for those in the mission district, life is worth savoring.

The more dramatic turns in the film, unfortunately, are a mixed bag. There is a pseudo-relationship with a neighbor that seems like it was written by a seventeen year-old creative writing student. And some of the events seem a little too convenient to be taken seriously, while others are strikingly predictable. The material is interesting, timely, worth telling. I can only wish it was said more gracefully than it is here. And the ending, well, it’s reminiscent of a few other climaxes in notable films.

Bratt’s gravelly voice echoes throughout this film, as his eyebrows anchor down, showing confusion and misaligned hatred. La Mission sports several good performances, but the tepid way it engages in important subject material makes it bob its head only slightly above disappointing waters.