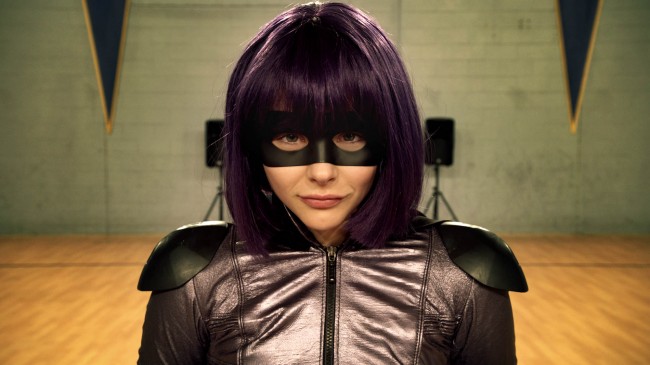 As far as books go, “Kick-Ass” is special to me. Not because it’s particularly that great or because I love it so much or anything, but because it’s one of the few Mark Millar books I actually liked. It’s not particularly good (you can read my thoughts on the original comic book and the first film) but it’s effective. In fact, it’s his only original book I liked. Aside from a couple of titles he wrote with major properties (“Superman: Red Son” and “Old Man Logan” are quick favorites), I don’t think much of his work really holds any water.

It’s true, I really don’t like Mark Millar. As a writer, anyway. I guess I can at least respect him for not having any pretention in his field of profession; from what I gather, he’s always been rather public with the fact that he wanted to write comic books that would be turned into movies. To this end, though, Millar has spent his entire original-comics career writing for the lowest common denominator, trying to net up as many low-brow and anti-sophisticates as possible while simultaneously trying to write as if he were the second coming of Alan Moore.

For example, his original comic “Wanted” (which has little in common with the horrendous film adaptation) tries desperately to be a critic of superhero comics and the inherent morals within those books, but instead comes off as a half-baked superhero themed “Ren and Stimpy” fan-fiction. To illustrate this point, consider the character written as an analogous parody of the Batman villain Clayface, which Millar dubs Shitface, in an attempt to be clever but instead just seems weakly constructed. Seriously, if you want a super-villain centered story about the morals of superhero comics, please consider “Empire” by the infinitely better Mark Waid instead.

Mark Millar is a guy who never learned how to use profanity (as, perhaps, Alan Moore, Mark Waid, and Garth Ennis did – all better writers in the field of comics) and instead uses it at every possible turn to try to impress you. Seriously, man, all the pimple-faced preteens are guffawing at your books, but none of us grown adults are. I’ve spent so long on this because it’s important to understand the writer if you want to understand the film based on his work. When it comes to profanity, the film has all the same problems as Millar does.

Kick-Ass 2 picks up where the first film ended, taking a moment at the get-go to let you know that the world felt the effects of Kick-Ass’ (Aaron Taylor-Johnson as the teenaged Dave Lizewski) first escapade, and that new every-day heroes have begun to spring up everywhere. In the height of this trend, Kick-Ass decides the only option now is to start a team of heroes to really drive the point home and make a real difference. Enter Justice Forever, a team of costumed do-gooders led by former Mafioso Colonel, Stars and Stripes (Jim Carrey).

While Hit-Girl (Chloe Moretz) contemplates retirement from the brutality of crime-fighting, Kick-Ass and his crew set to the streets to feed the poor and stop muggers and purse-snatchers from running amok. During all of this, Chris D’Amico (Christopher Mintz-Plasse), the hero-once-known-as-Red-Mist, re-dubs himself The Mother Fucker and sets out to not only be the first super villain to counter Kick-Ass, but also to start the first villain supergroup. Chaos ensues in a whirlwind of hyperviolence (which, actually, isn’t as bad as the first film) and rampant profanity (which is much, much worse than the first film).

Now, don’t get me wrong, some aspects of this film are better than its predecessor. Aaron Taylor-Johnson’s accent, for example. It seemed I was aggravated by the in-and-out of his vocal patterns during every scene in the first film, but he manages to keep it corralled in his second go. The ridiculous violence in the first one is also toned down in this film (for the most part). Sadly, more things are worse with this movie than were with the original. I praised the original for having a great sense of pacing and time. I can’t say the same for this sequel.

Events are rushed along hurriedly for the soul sake of forcing a plot along. Events that ought to take weeks seem to manifest overnight in this film, and other events that should be expanded for logical dramatic effect are over in the blink of an eye to get back to the violence and swear words. Not only does this movie have no sense of pace, it has no gravitas. Where the film ought to pause and consider the complexities of the morals it is exploiting, it scraps any potential for inspection and opts instead for toilet humor.

The sequel seems to revel in this kind of toiler humor, amping up the redundant and gratuitous profanity of the first film to nearly unbearable levels for the sake of cheap and easy laughs (come on, Matthew Vaughn, I expected better from you). In no scene is this illustrated with more precision than a moment that shows a high-school girl vomiting while blasting CGI diarrhea simultaneously. And speaking of lousy CGI effects, this movie is downright lazy when it comes to the resulting gore of the inherent hyperviolence. Every splatter of blood is a cheap CGI spattering that lacks any kind of weight or believability – much like the film’s use of profanity.

Interestingly, the easiest parallel to draw from the film to Millar’s writing and ability is that of Chris D’Amico, also known as The Mother Fucker. Chris D’Amico is a character that the film tries to insist is an immature spoiled rich kid, but instead plays out as a punch line of jokes aimed at the same type. When he decides to re-brand himself as The Mother Fucker with the same sarcastic brilliance of Lizewski naming his hero Kick-Ass, his advisor and ad-hoc guardian Javier (John Leguizamo) urges him to reconsider. Instead of using this moment to drive the point home and give the audience some sort of context as to why D’Amico is so brash and unreasonable, Javier merely shrugs it off and lets the audience laugh.

If you remember, I also had a problem with Moretz’s performance in the original film. Don’t get me wrong, guys, I understand why we’re supposed to think it’s funny – a tiny little girl with the foul mouth of a drunken sailor – but I also understood that the young actress laid it on way to thick for it to be effective and that, in context with her relationship with her father (Nick Cage as Big Daddy) and his character, the son of that man wouldn’t have the attitude that Hit-Girl had, no matter how badass he trained her to be, Big Daddy was still a mild-mannered good guy.

I have even more of a problem with her performance here in the sequel, and not just because of how funny the girl is started to look as she grows up. Now, the reason we’re supposed to think her character is funny is gone, because she’s not so tiny and little anymore. In high school, I knew plenty of goth girls and punk girls and grunge girls and girls who otherwise thought they were a lot tougher than they actually were and tried to hide behind squinted eyes and crude vocabulary to hide their shortcomings. Back then it was sad and a little pathetic, and here’s, it’s no different. Her attitude is too far hyped up and her performance is far too unbelievable to be funny. But it didn’t stop her from trying, so bless her heart and her dedication to the role despite everything that’s working against her.

The last straw for me was the fact that my favorite aspect of the original film – the numerous pop culture and comic book references – were nearly absent. I recognized only two instances of this: one which shows Dave waking up wearing a shirt that reads REBOOTS SUCK and another moment where a character is hanging a poster for a Mark Millar comic books (Millar doesn’t have much humility). But besides that, any clever or funny quibs into national culture or comic-book parodies are completely gone.

I suppose I ought to address the whole Jim Carey thing while I’ve still got your attention. As you all know, following the events of Sandy Hook Elementary, Jim Carey removed support from this film, not because he was ashamed of it, but because he couldn’t support the level of violence he seemed to believe it endorsed. This is particularly sad because Carey really was the best part of the film. He is the only character that shows any real soul and has the best comedic timing and presence in the picture. Not only that, but his is the character that pokes fun at the film’s rampant overuse of vulgarity. Colonel Stars and Stripes, as he’s known to his team, is a born-again Christian and won’t allow any harsh language in his team. I was able to exert a few weak chuckles at this.

Now, I’d like to defend the film’s violence and say that it’s meant to be a parody of violent films and comics. I’m sure that’s what the studio would say. Too bad for everyone involved, though, that a parody has to actually inspect its subject matter, not simply send it into hyperdrive. On that regard, the film failed, and failed gravely.

To make matters worse, Millar tried shooting back at Carey and other detractors by likening his story to the works of Sam Peckinpah and Martin Scorsese (seriously, Mark, you’re getting a little too big for your britches) by saying that it’s really about the consequences of violence. Well, this is simply false, because never do the characters of the film take pause to look at the havoc they’ve sewn and considered what the repercussions will be. I don’t believe Moretz’s claim that this movie “teaches kids what not to do” because the film does more to glorify the language and level of violence by turning it into something for people to laugh at than it does to take away its power. Again, this isn’t to say that I think this movie will entice or coerce people to go out and be violent, swear-slinging douchebags, but the above to arguments are weak and unfounded. Shame on you two.

If I had to guess, I would predict that the younger-than-21 crowd will love this movie, the people who really enjoyed the first film will only kind-of enjoy this movie, but anyone else will downright hate it. At the very bottom line, this film is a lazy and soulless sequel to an otherwise fun film based on a comic book that stands out among a reeking pile of feces that accounts for the writer’s collective work. If you respect yourself and your wallet, you won’t be touching this film until it will only cost you a dollar at Redbox.