Sheena is a Punk Mocker 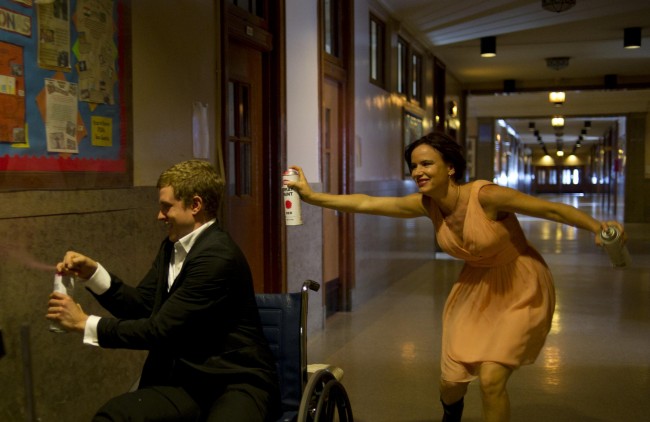 Middling, downtrodden, clawing out of a heap of emotional malaise. Kelly (Juliette Lewis) is steeped in repressed fears, admonishment, tides of doubt. Having just had a baby, she is in the throes of despondency and existentialism. Her husband, Josh (Josh Hopkins), is a responsible but unvaried partner. And with a onerously stuffy in-law wagging their spindly finger, Kelly’s black cloud seems to be more of an anvil than a suspended mass. And so, like every other movie where a protagonist is bound by chains, Kelly finds sunshine in the form of an unlikely source. Here, the beams come from a perverse and irreverent teenager named Cal (Jonny Weston). Fastened to a wheelchair, the snark driven neighbor unleashes a volley of snappish attitude that Kelly finds endearing. The odd couple formula, as you can probably surmise, has a meet cute.

Juliette Lewis’ dogged yet blase attitude works perfectly within the confines of Kelly’s languid but brash persona. The actress oils her lines with a sort of believable ennui. Jen McGowan, the director of the film, is well aware of Lewis’ droll, almost woozy, delivery. And the film benefits from the spot-on casting. Meanwhile, Jonny Weston’s hurricane of angst and tarnished charisma do well for his respective character. The problems don’t really exist within the belly of the cast.

When Kelly & Cal begins to unearth serious issues, such as infidelity and depression, the script’s porous nature becomes grossly clear. Amy Lowe Starbin’s script seems ill equipped to armbar dense affairs. When fights occur, spats ensue, and turmoil thumps its feet, Starbin’s script stumbles as if it’s too timid to commit to the seriousness that it set itself up for. Diaphanous dialogue and cheap, maudlin one liners fill the hull. At one point, a statue of Kelly is destroyed by an incensed Cal. With tears burning down his cheeks, Cal cries to Kelly, “now you’re broken, too.” This sort of wince-worthy dialogue is culpable for most of McGowan’s errs.

We’re supposed to believe that Kelly has grit and steel, because she was in a band and listened to Sleater-Kinney, but the indigestible script keeps her background from seeming plausible. Naming places and things doesn’t necessarily build a character, especially if the screenwriter doesn’t buy into what their writing.

By the time Kelly & Cal – playing now at the Digital Gym – has reaches its insipid conclusion, you wonder where its daring sensibility went – or if it ever existed at all. You can smudge the makeup on an actor or actress, but without the visceral screenwriting or the confident direction, you’re going to get a vapid product. Here, the story exists without a masthead.