Does this Movie Come with an Ejection Seat? 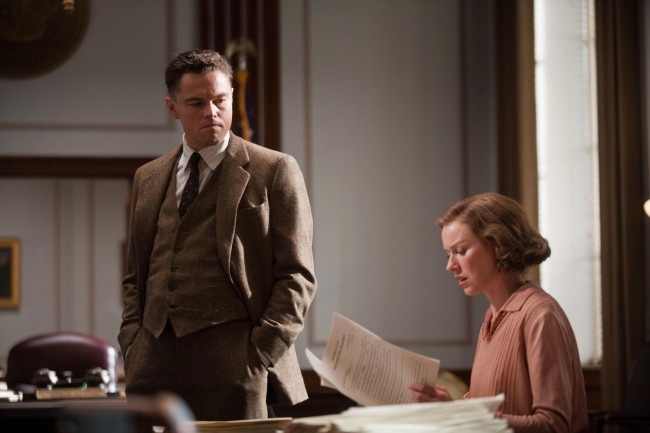 Warner Brothers should have renamed J. Edgar “Watch Clint Eastwood Fall Asleep at the Wheel”. This historical biopic about the advent of the Federal Bureau of Investigation is terse, rife with plasticity, and about as warm as an insulated container of liquid hydrogen. Screenwriter Dustin Lance Black, in an attempt to humanize Hoover, has scraped off the more damning lore that has been attached to the hull of the enigmatic FBI director. Gone is the hunched over, maligned, clinking black armor of an esoteric power monger. Eastwood’s portrait of Hoover is one of a maimed, conflicted, torn psyche. The aforementioned issues are territorial to a standard biopic, it is well known, but the problem is that Eastwood deep fries these psychosomatic imbroglios in soap opera tropes.

In Martin Scorsese’s biopic “The Aviator”, based on the also acrimonious Howard Hughes, there was a sense of person, feeling, time. It was a film, much like “J. Edgar”, where an implacable megalomaniac does some pretty grim fencing with his own demons. The difference is that Scorsese can take things, dead and forgotten, in the fashion of that great literary cuckoo Victor Frankenstein, and make a living amalgamation of their parts. Here, Eastwood yellows the pages of history instead of preserving them. “J. Edgar” looks authentic, but there’s nothing inside of the hood; it’s like a first-edition leather bound book with the pages missing. Sadly, Leonardo DiCaprio, in the fashion of Emilio Estavez in “Young Guns II”, employs his best syrupy, old-man-drawl in order to play Hoover as an elderly curmudgeon. DiCaprio’s wispy, overwrought accent becomes the movie’s chief narrator, as we are taken back to the fiery beginnings of Hoover’s life. Because of the shoddy film saturation, many of the flashbacks look like episodes of “Cold Case”. Even worse is the fact that Eastwood films “J. Edgar” in the most clinical, removed, absent way possible. This film, coupled with “Hereafter”, have solidified, in my mind, that the auteur has lost his touch. I don’t expect the buoyant, jitterbug camerawork of Paul Greengrass. I do, however, expect the frames of this film to contain some semblance of life. This film has no synapses; it’s as though it’s dead. If some directors paint, Eastwood draws stick figures. This movie uncoils with the excitement of a wet straw wrapper.

Worse still is the score, composed by ole’ grimace lip himself, Clint Eastwood. Most scenes in this movie are carpet bombed with plinking pianos. The musical composition seems to have wanderlust, as each key clinks and booms at inappropriate times, much like a toddler playing with his first Casio keyboard. Sequences of unbridled emotion are turned into Spanish language soap operas, sadly, because of the erratic, despondent, tissue-crumpled-score.

The casting is also unfortunate. DiCaprio, here, in the earliest stages of the film, is purported to be playing a twenty-four year-old J. Edgar Hoover. DiCaprio is noticeably older, obviously, and short of using the reverse aging technology that David Fincher used in “The Curious Case of Benjamin Button”, there wasn’t much to remedy this distraction. Naomi Watts trumps DiCaprio, however, as the forty-three year-old actress plays twenty-one year-old Helen Gandy. Watts looks no more twenty-one than Maggie Smith looks ready to celebrate her sweet sixteen. Later in the film they are caked with aging makeup, which, due to some of the dubious effects, is even more disconcerting. The makeup used on Armie Hammer’s character makes him look like he’s donning a prosthetic mask from the Twilight Zone episode “The Eye of the Beholder”. If you put silly puddy over a blowtorch’s flame you would probably get the same makeup that Hammer is seen wearing. Eastwood is ambitious, there is no doubt, but between the wooden acting (Watts crinkles her nose, every now and again, to look aghast) and the ridiculous execution of the script, there is little to be excited about – unless you want to emphatically hate the film. Stay away from this Oscar bait unless you want a hook in your lip.