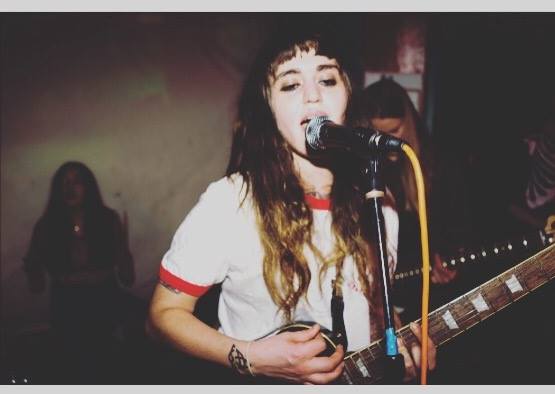 The instrument jarring, floor stomping, guttural vehemence of Brooklyn’s Ex-Girlfriends — Tarra Thiessen, Heather Cousins, Christine Hill, Monika Knapp — create a landscape of circus mirrors and guitar eviscerating mayhem. The band’s supercharged, third rail of an EP, You’re Next, combines balloon punting levity with grimy, unrelenting madness. We interviewed the inimitable Heather Cousins in advance of Ex-Girlfriend’s sprawling, blacktop racing tour to discuss the power of live music, the radness of “High Fidelity”, the electricity behind a great stage presence, and the greatness of getting tattooed first thing in the morning.

Rob Patrick: You’re Next never compromises its resolute, barbed, and sometimes effusively gritty tone. There’s well-orchestrated chaos on the release. What were some of the things that you discussed with the band when creating the EP?

Heather Cousins: Hey, Rob, thanks so much for the kind words in relation to You’re Next EP as a whole. Some songs were very much Tarra’s idea and some were mine but the EP was, overall, a collaboration between all of us.

Your stage presence with Ex-Girlfriends is wholly invested, concrete pummeling, and unafraid. Basically, your set at Tower Bar was one of the most memorable experiences I’ve had at a live venue. In your opinion, what makes a great performance?

I’m so glad you enjoyed our show at Tower bar; it was actually one of my favorites on the west coast tour. That one and High Hat in LA and Twilight Bar in Portland were the absolute best times. As far as my stage presence, I’ve been a front woman in different bands in NYC for ten years. My first band was a riot grrrl hardcore band called Titfit that I just sang in, and then I fronted and played guitar in a surf rock punk band with some amazing guys for four years. We were first called The 8th Passenger — we had a 7″ under that name — and then became The Gloomy Ones. I also played guitar and fronted a pop-punk band called Side Bitch, and we may do some shows again. Going wild and just feeling it makes a good performance. One of my favorite performers is Mike Hunchback from Hunchback, Night Birds and my favorite project of his is Weird Fantasy Band.

Before you were a musician, what was a concert experience that changed your perception of how powerful live music could be?

Before I was a musician one of my favorite bands to see in New Jersey was The Ergs!. I’m so glad Mikey [Erg] has a new band. He can really write the best pop love songs, and it was incredible to watch him play drums and sing back in the day — he’s amazing at both. I just loved the energy and all of these folks singing an upbeat love song like it was a hardcore anthem.

Under this particular administration, arts have been defunded and human rights have been challenged. As a musician, what do you feel is the best way to reinforce DIY spaces and engage in community dialogue?

Unfortunately, there are fewer and fewer DIY spaces these days, especially in New York. But just getting folks in a garage to play for a few friends is so important. We need to make these spaces safer and up to code after the Ghost Ship fire. I think it’s important in this day and age, as it has always been, to be supportive of one another.

If you were to score a film, what director would you want to work with? Extra: What’s your favorite movie?

You and Tarra are my favorite vocalists in a single band. I guess this is less of a question and more of a statement. I had nowhere else to go with this.

I also think Tarra is an incredible musician, overall, and so is Monika and Christine. They are some amazing women I’m lucky to get to play with. And thanks, I cant wait to write more after this next tour.

When the band was creating the video for “Bones“, you managed to sneak into a hotel pool at night with skeletons in tow. How did the band manage to get away with this specific caper?

Making “Bones” was so much fun, especially trashing that hotel in glitter and sneaking into a pool late at night. We just kind of went for it as we keep doing with pretty much everything.

Ex-Girlfriends are headed to SXSW to play a round of shows. What’s the band’s strategy during that specific week of performances?

For SXSW we are playing all of The Little Dickmen records showcases. I also made friends with Onward Indian Touring and I’m not only psyched about our show with them and but the opportunity to continue doing work with them. We are also playing at Hotel Vegas and I’m psyched to continue working with the booker there as well.

What are three songs that changed the way you look at music?

Three songs omg that’s hard. I’ll just say some of my influences though the years. Man Or Astroman, The Mummies, Holly Golightly, L7, Butthole Surfers, Hole, and I’ve been listening to The Replacements, like, every day.

Finally, what were the circumstances behind getting David Duchovny’s autograph tattooed on you? How quickly did you find an artist?

Hahahaha my tattoo I got today. Well, I met David at Gramercy Theatre, where I’ve worked for six years. He was performing. I’m a huge X-Files fan, let’s just say, and so I was star struck: He’s the nicest dude. I woke up this morning and got his signature tattooed and still need to do my laundry.