The Scariest Film of the Year 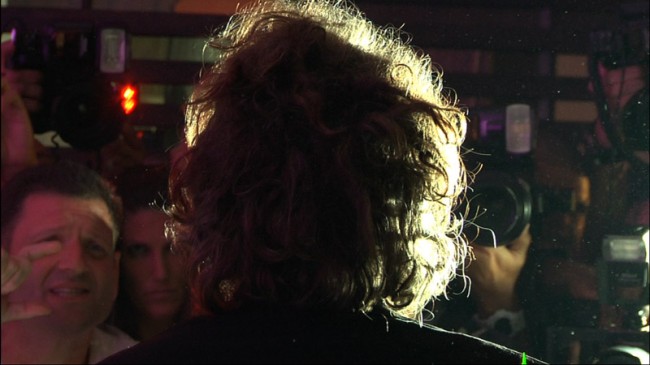 “Towards the end, he kept saying, ‘I’m tired, I’m tired. I’m sick of it. I don’t want to do it anymore.’ But at a certain point you just don’t even want to listen to that; you just think it’s the ramblings of someone at the end of a shoot, so I kind of ignored it. But that was the only thing I heard about it. And then two months later, after I came back from the filming, my wife called me into the kitchen. She showed me a picture of Joaquin on the computer screen, with this big beard, looking like Rasputin. And he was saying that he was quitting acting. I was a little bit peeved because you would think he would at least call me up. But, I don’t know, he marches to the beat of his own drummer. That Joaquin, he’s an interesting guy.”

When I spoke to James Gray, the director of Joaquin Phoenix’s last film, these were the words that propelled from his lips as if a nine-iron had hit them. “Two Lovers”, the movie in question, would be Phoenix’s swan song as an actor. Joaquin became his own bearded messiah, molting the wings of his film career and taking on those of a hip-hop artist. The change turned out to be, as many had imagined, a complete disaster; Phoenix was habitually booed and, at certain points of time, actually swung at by hecklers. The impassioned cry of his lyrics – more like a syrupy warbling – sounded incoherent, without cohesion, and entirely lethargic. Imagine someone talking in their sleep, in a low mumble, and you basically understand what the lyricist’s music sounds like.

In “I’m Still Here”, a completely uninhibited documentary about the life of Phoenix, we see him as he goes from respected thespian to berated and fledgling hip-hop artist. More exact, we see him go from quiet eccentric to rabid lunatic. Casey Affleck, Phoenix’s brother-in-law, films Joaquin as he flails around and feverishly laughs like an inmate at Arkham Asylum. The camera bobs and jerks, making sure to capture every sickening moment, as Joaquin engages in perverse acts with women and takes so many drugs it looks like he was hit with a bag of baking soda.

Phoenix is a vapid mess in this film. The former actor’s beard practically envelopes his face, while his eyes are rubbed out by dark sunglasses, and his hair looks even worse than Nick Nolte’s mugshot photo. Phoenix’s Manson-esque appearance is heightened in creepiness when his legs rev-up, like two hydraulic cylinders, as he wildly dances in place like a madman. The whole thing is dreadfully scary, to the point of nausea, especially when Phoenix writhes and indiscriminately spits saliva while calling his hired-help a bevy of derogatory names. There is never a point where Joaquin looks sound of mind, capable of conversation, or even mildly aware; he simply doesn’t allow himself enough slack for even the most basic of redeemable qualities.

There are a lot of theories that this documentary is an elaborate hoax, trumping that of Andy Kaufman, and that Phoenix and Affleck are playing a giant game of Mouse Trap with every one’s minds. “I’m Still Here” is either a parlor trick or an obsessively factual document of Phoenix’s cerebral erosion; either way, it’s a complete tragedy. If a mockumentary, Phoenix and company pull the wool down so far over us that we’re suffocating. If a documentary, it’s a loopy and twisted sideshow of a man’s soul who has more thorns on it than one would care to touch. The picture is too grisly and indulgent to have a wide audience, but it is still freakishly interesting. “I’m Still Here” would attract people who would watch hangings at gallows. The drawing point for Phoenix’s new career is curiosity, and, as the saying goes, curiosity kills – no exception here.

Phoenix’s life isn’t just a train wreck, it’s a train that managed to derail and fly into a bus of orphaned children. It’s hard to say too many despicable things about his wholly unlikable character, however, especially when this film is so self-deprecating. Joaquin manages to break down and cry, after the now famous Letterman interview where he looked as if his entire mind had been jettisoned from his body, and yells about how he is a failure. Spit bubbles and wet eyes are the norm for the once talented actor, whose persona is more of a tantrum throwing man-child than merely a Hollywood oddball.

“I’m Still Here” will upset and confound people. Is it a prank pulled by a giggling Affleck and a snide Phoenix, or is it a disheartening look at the black abyss that has siphoned Joaquin of his soul? I’m too depressed and confused to be upset at either situation. The film transcends conspiracy to be sad no matter what it is – fact or fiction. And because of the sadistic curiosity in me, I will continue to rubber-neck at this accident. If fake, this is the best method acting I have ever seen. How unhinged and manic. How disturbing and collectively bizarre. There is something to be said, no matter how negative, about Joaquin’s deranged attempt at hoax or alternate career that is macabre and interesting. The fact that he allows us in to a broken world – I don’t care if it’s fake or real, it’s still broken in different ways – is sickening and intriguing. There wasn’t a moment where I felt indifferent in this documentary – and there is something to be said for that.