I Love You Phillip Morris

Catch Me If You…Meh…Don’t Bother 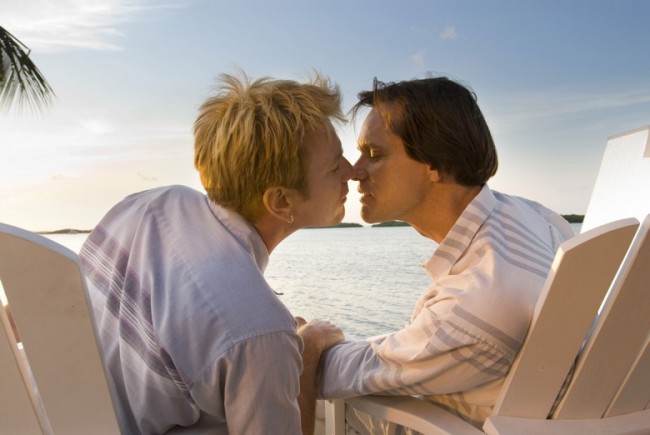 I saw this movie a little over a month ago, maybe less. If “The Talented Mr. Ripley” was directed by the guy who did those Enzyte commercials with the plastic-faced “Smilin’ Bob” character, you would have “I Love You Phillip Morris”. The tone is daffy, light hearted, exuberantly over-energetic and whimsical – no matter what happens to the film’s characters. Jim Carrey plays Steven Jay Russell, a man who hides the fact that he is gay, for years upon years, until he gets into the type of car accident that would require the jaws of life to pry someone from the twisted metal of the vehicles involved in the crash.  When he rehabilitates he comes out of the closet, lives life the way he wants to, and even begins partaking in illegal activities in order to make some extra cash. Jim Carrey is practically playing his Riddler from “Batman Forever”: Steven Jay Russell is an elaborate schemer, a prison escapee, a pathological liar, and a self-indulgent madman.

When Steven Jay Russell is convicted of one of his crimes, he meets the niave and well meaning Phillip Morris, a man whose heart is the exact opposite of Steven’s crooked aeortas. Because Steven is charismatic and wicked, he feeds upon Phillip’s bashful sensibilities until the two are wrapped up in the thorny vines of Steven’s dystopian mindset. The whole episodic nature of the beast is pretty depressing, but the direction of the picture makes it look like a Dos Equis commercial. Though Ewan McGregor and Jim Carrey do an alright job, the script is predictable, heavy handed, without wit. The pacing is also pretty awful (there are so many false endings in the movie that it feels like it is an hour longer than it actually is).

“Catch Me If You Can” is a pretty good compass on how “I Love You Phillip Morris” operates.  The biggest crime is that, beyond a few good scenes, most of the bits in the movie repeat themselves to the point of looking like instant replay material. There are also so many expository flashbacks that “Scooby Doo” would blush. Yeah, the screenplay looks like it was written by a creative writing student who had seen “The Great Imposter” on Turner Classic Movies one too many times.

Steven Jay Russell’s character, I suspect, is supposed to be someone who we feel, because of his poor decisions in life, empathy for. The problem is that he pulls the audience’s leg to the point of ripping it off of their body altogether. There is little way to feel sympathetic for the alleged protagonist, especially since he has the moral code of a jacknife. Phillip Morris’ character we feel bad for, we trust. The problem is that you’re so exhausted by these repetitious displays of disorderly conduct that you feel too exasperated to really care about any of the players in this movie. Imagine a magician doing the same trick, over and over again, without any variation. Okay, now imagine this same trick being done for two straight hours as the magician in question simultaneously tells you how the trick is done each time. Yeah, that is anticlimactic.