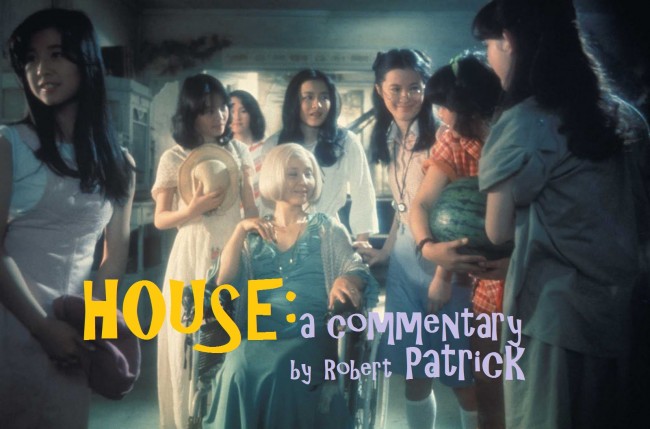 Has someone pierced a rainbow with a buck knife? Why are colors jetting from the screen like a severed artery? There are too many pastels everywhere! I feel like someone dumped a bucket of water on a coloring book and let it bleed. “House” is a visceral experience that plugs any would be platitudes into a guillotine and lets the blade whoop. It’s not really important to describe the plot, to be quite honest, as the film is essentially an aesthetic extravaganza of the unlikely and the unhinged. Imagine going into San Francisco’s Musee Mecanique and dropping a salty penny into the cage of Laffin’ Sal. The experience of watching “House” was meant to be deliberately surreal and bombastic. Everything is unsettling; the oozing saccharine of the lullaby-like score decoupages the characters and renders them like an insect stuck in resin. Virtually every camera trick is used in the playful “House”; this may seem like a college student flipping through the functions on his new camera, but the execution of these visual parlor games is done with a certain eclectic chaos that is not only contained but curiously artistic.

Many of the backdrops resemble starchy looking water color paintings. They seem as though they could be made of rice paper. The girls in the film prance past the faux-suns and unwavering grass, giggling and eating, like widgets in a daffy machine that requires their unbridled enthusiasm. Because everything in the film is so bright while remaining glazed with darkness, “House” is ethereal and uncompromising; tufts of color spill everywhere like a pinada performing hari-kari.  Later in the film when the girls start experiencing evil pianos and soul asphyxiating mirrors, this spattered universe puts its foot to the floor and drives right through the right side of its director’s brain.

The loopy madness of “House” isn’t perfect by any means, but what it lacks in narrative and structure it reaffirms in the bowstrings of its creativity. The cornucopia of severed heads and possessed cats isn’t nearly as terrifying as a score that is more affluent in whimsy than it is rich with horror. “House” is a weird dichotomy: it’s half a messy, kicked over paint bucket and half an artisan calligraphy class. The two never get into a row with one another, however, and instead playfully joust with their respective abilities.

“House” can get a little long at points, but it always rattles its tail, aggressively, to remind you of its striking power. Watching Obayashi’s film can remind you of how anemic American horror films can be – not that most people haven’t noticed – and make you want to dig your fingers into other Japanese genre pictures of the same nature (not that there is anything quite like it). The syrupy and yet sprite exuberance of the film is a kaleidoscope of images that will likely remain with you long after its chalky peddles have stopped spinning. What is it like to be carpet bombed by mewing cats and ghostly wells? It’s sort of like being head butted by a gumball machine.