Home » Film » He’s Just Not That Into You

He’s Just Not That Into You

A Swan Dive Into the Hearts of Many 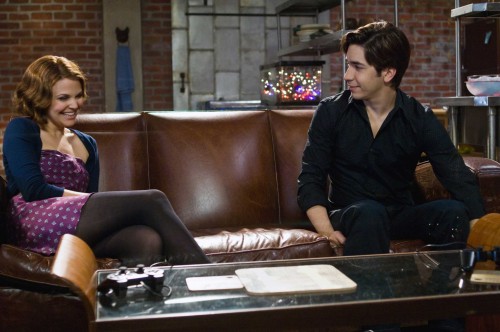 Based on the wildly popular bestseller from Greg Behrendt and Liz Tuccillo (also scribes for the recent Sex and the City mania) He’s Just Not That Into You thankfully veers from the overplayed blissful endings of most romantic comedies and gives it to you straight. Well, not quite straight. But straight enough, considering from the opening credits you are going on a comically twisted ride around love triangles, over mixed signal speed bumps, and through the tunnels of human emotion and desire.

Through delightful navigation of the uncertainties of the heart, audiences are introduced to a variety of characters, each fumbling through life and love, each dealing with personalized temptations and delusions. As the cast unfolds, even the most pop-culture-oblivious audiences are amazed. With each new scene, and seemingly every new camera angle, another well-known celebrity is added to the roster.

Whether it’s the marvelously misguided Gigi, played adorably by Ginnifer Goodwin, the recalcitrant boyfriend Neil, played by Ben Affleck, or the coquettish Anna, played all too convincingly by Scarlett Johansson, each character embodies a prevalent insecurity both within themselves and a counterpart. Add the desperate realtor Conor, played by Kevin Connolly, the hardened bar manager Alex, played by Justin Long, and Neil’s frustrated girlfriend Beth, played by Jennifer Aniston, to the mix, and the plot thickens with not only talent and charisma, but ironies and faux pas. Throw in Drew Barrymore as the technology junkie Mary, Bradley Cooper as the impish and unfaithful husband Ben, and Jennifer Connelly as the paranoid and uptight wife Janine, and the story runneth over with tears, laughter, and a chorus of “awws” and “oohs” from the audience.

A charming combination of realistic woes and fantastical run-ins, He’s Just Not That Into You explores the “it’s a small world after all” principle with international emotions, worldly intermissions, and multi-cultural interludes. Even as a certified chick flick, this film offers plenty of redeeming qualities to all (and yes, I am including heterosexual males.)

Aside from the mind-blowing cast HJNTIY is sure to be a blockbuster based on the simple concept of the movie: if a man doesn’t call, doesn’t marry you, or sleeps with someone else… (all together now) he’s just not that into you!

Unless of course, you’re the exception.