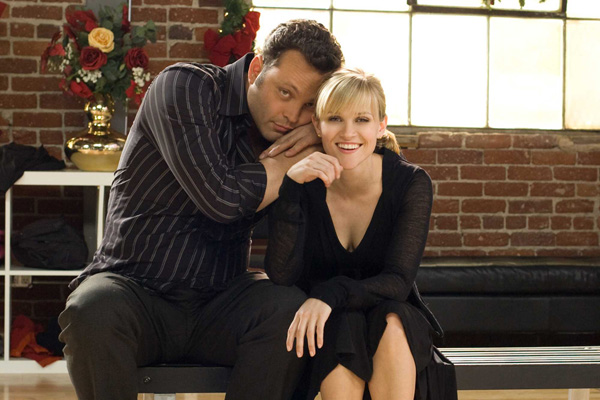 I’ll begin by saying that, despite the title, this is not a Christmas movie. There are none of the trademarks of Christmas movies: gently falling snow, serene music, midgets in stockings, or a fuzzy sense of nostalgia for lost childhoods. In fact, the movie took place in San Francisco, so nix the snow all together, and the only semblances of the holiday seen were an extravagantly produced nativity scene performance, dusty reindeer shaped lights on a rundown hilltop home, and a rather constipated-looking porcelain Jesus statue. The film is, however, a comedy, though it’s a comedy of the worst kind: the kind that relies not on jokes, but on making fun of peoples’ uncontrollable weaknesses.

The film is broken into three sections, which the filmmakers will insist are acts but are, in reality, more like episodes. The first episode consists of the set up. After a freak weather condition, a couple is barred from their tropical Christmas plans. Not ten minutes into the film, Kate (Reese Witherspoon) shouts out as clear of a thesis statement for the film as any: “we have to spend Christmas with each of our parents!” Not ten minutes later, Brad (Vince Vaughn) repeats: “we have to survive these four Christmases!” Equality is strong in this film. From there, they truck on over to Brad’s father’s house, where we see Brad pummeled by his brothers and insulted by is father. The second episode consists of the meetings with each of their mothers, where we see a vomit gag and an eight-or-so-year-old stick a soiled pregnancy test into her mouth. Onward to episode three: Kate’s father’s home, conflict, conclusion, and wrap.

Each episode begins with a reassurance of love between Kate and Brad, is centered around an event that tests their love, and ends with them throwing an argument back and forth only to make up at the beginning of the next episode. Therefore, the film is based on a loose chain of arguments and false resolutions, all leading up to the grandest argument as the couple splits up and leads to what the director hopes will be a more realistic, reassuring resolution.

The humor of the film shifted constantly from the vulgar to the absurd, utilizing a duo of vomit scenes and a troupe of sex-starved old women while still assuming phrases such as “big fat purple teddy bear” are funny. Another disturbingly common element is that of child violence, used at length on two occasions: first, as Brad’s nephews brutalize him using a series of UFC maneuvers, and secondly, while Kate traps a group of relative children in an inflatable jumping hut and proceeds to maliciously toss them around.

The acting didn’t lend much to the story at all, either. Any exchange between Witherspoon and Vaughn ranges from stiff to inexplicably compulsory. Witherspoon, on one hand, seems incapable of portraying any emotion at all. Instead, she resorts to trying on the same expression time and time again, something that resembles a puzzled duck. When she’s surprised, she makes the duck face. When she’s introspective, duck face. Heart-broken, duck face. You can see how this will lose interest quickly. Vaughn, on the other hand, can’t seem to handle his emotions, clicking easily from wildly outraged, to wildly apologetic, to wildly enthusiastic. All the other characters exist only to serve the plot and lack any development at all. Surprisingly, each of the character’s fathers are given key lines, Robert Duval playing a rowdy old man and Jon Voigt reprising his role as the wise old man.

In short, I, personally, only chuckled once during the entire ninety minute running time, and as I think back at it, I can’t remember what it was about. However, that one chuckle is the only thing saving this movie from getting the rock-bottom rating, because there is no other redeeming quality to be seen.