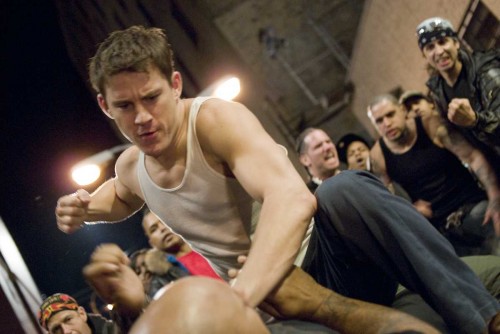 It seemed that Dito Montiel’s Fighting could provide the best of both worlds to audiences. Channing Tatum provides the eye candy for the ladies, while the fighting should be more than enough to entertain the men. So, if it weren’t for the completely predictable plot, the boring actors, the expected love story, the flimsy fight scenes and the lack of chemistry between all of the actors, Fighting could have been an entertaining movie. But it isn’t. It’s an hour and thirty five minutes of predictable behavior and unexciting relationships.

Set in New York City, a young counterfeiter Shawn MacArthur (Channing Tatum) struggles unsuccessfully to make money selling knock-off books and CDs. After being hassled by a small gang of kids, led by a slick two-bit hustler, Harvey Boarden (Terrence Howard), Shawn demonstrates (lightly) some of his fighting skills, and is soon recruited by Harvey to become an underground street fighter. Shawn is desperate for money, and having left his home due to an incident with his father, which is never fully explained, has no where to go or stay. Harvey becomes his mentor and coach, although he does neither mentoring nor coaching and just schedules fights for Shawn to participate in.

It seems that Terrence Howard, undoubtedly a talented and versatile actor, misguidedly chose to portray Harvey Boarden with a whiny, monotone voice wrapped in a bland and drowsy personality, instead of pulling himself to the mean, manipulative slick hustling type we all know he can very well be (i.e. Hustle and Flow). Channing Tatum fit’s the physical build as a fighter, but his personality for his character is borderline non-existent. It’s almost as if everyone in the film decided that a lumbering attitude, and slow to the point of special, could be portrayed as artistic and edgy. The three hustling youngsters who are part of Harvey’s group are probably the only characters that bring a stronger energy to the movie than any of the other actors, who all took the same route and decided to lumber through the movie by mumbling, talking slow, and perfecting deep sighs and pained looks. I’ve seen more drama at my Grandma’s house. And maybe more fighting too.

Shawn’s past is hazy, and it becomes obvious that his father is a sensitive subject. Why? I have no idea. The attempt at a climactic moment of Shawn’s character development, when he confesses his inner remorse to his love interest Zulay (Zulay Valez), falls flat and ultimately leaves the audience unsympathetic to the boy who never forgave himself for something he did to his father. Sad? Not really. Funny? Unintentionally, yes.. With such outlandish caricatures like Jack Dancing (Roger Guenveur Smith), who purses his lips more than an irritated diva, and the flimsy, undeveloped “rivalry” (All you hear is something about Shawn’s father. That’s it. You don’t really know why they hate each other; and you don’t really care either), between Shawn and old schoolmate Evan Hailey, played well by Brian J. White, Fighting is underdeveloped and uninspiring.

The forced love story between Shawn and Zulay is also lackluster. There is chemistry between the two, and they make an attractive couple. But from my personal experience, girls don’t tend to find stalkerish behavior acceptable, let alone attractive. So leave it to Hollywood to make a guy who, after meeting you once, waits for you at your work, follows you to your house, and offers to pay your rent, the main object of lust and love for any woman. The title is a bit misleading as well, and lacks creativity, much like the movie itself. I have to admit – I love watching fighting. Down and dirty street fighting is right down my alley. So thought I’d be watching some good old fashioned fist fights. Instead, I got about 3 sleeper holds, some kicks, and a blurry moment of good luck involving a water fountain. I expected better from Dito Montiel. A Guide To Recognizing Your Saints was strong and emotional, maybe because it was such a personal story. But the only element of this film I really enjoyed was the visual underground tour of New York. The establishing shots are raw, gritty, and beautiful, and Montiel uses the streets of New York to his advantage, working the city as probably the most interesting character in the story.