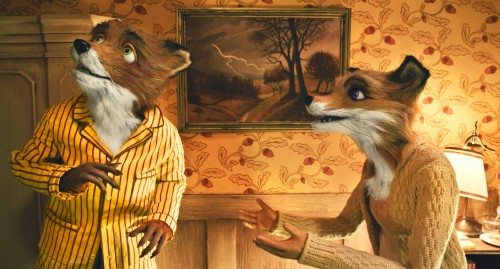 I’m not sure I ever expected to hear The Rolling Stone’s music rumble over stop-motion animation, but if there was a man to do it, director Wes Anderson would be the culprit. I can imagine Anderson, his trademark locks washing over his face, as he wears one of those creamy cappuccino dress suits. I can see a scarf wrapped around his neck, like a twist tie on a loaf of bread, as he marvels at his little clay creations. Roald Dahl’s book, “The Fantastic Mr. Fox”, is a playground for the director’s unique mind; malt colors are tossed around, while little animals exchange existential ideals. The premise, dealing with a charismatic fox whose primary skill-set involves robbing chicken farmers and speaking with a monotone hum, is chalked full of dry humor, slick dialogue, and plenty of explosions. It’s unlikely that an animal will ever have a midlife crisis, but, for the sake of adventure, our protagonist, Foxy (George Clooney), ends up having one twelve years after he promises his wife that he will hang up his thieving ways. The promise, as one can only assume, does not last long, and Foxy begins to concoct elaborate ways of resuming his life of crime – this time bringing his whole family into the mix.

The whole movie is about a batch of bumbling dynamo animals, hell bent on robbing three unsavory farmers of their goods, all while taking care of their family. Foxy, of course, is at the vanguard of the operation, and takes every opportunity he can to straighten his collar and wag his tail at danger.

Jason Schwartzman is great in his role as a twelve year-old fox, which, to say the least, is probably the greatest compliment he’s ever received. Schwartzman’s voice is wry, sarcastic, and full of nasally adolescence. Willem Dafoe, who plays a greasy rat with the finger-snapping demeanor of a West Side Story extra, hams it up with some sort of bastardized German accent. The whole exercise is hilarious, obviously, as Dafoe’s rat character slithers about, waving a switchblade, while pouncing on Foxy. I cant wait for Anderson’s next movie, as he will probably cast Defoe as a sorcerer from the old west with a stutter.

The animation in “The Fantastic Mr. Fox” is a little rough around the edges, as one would expect, and comes off a little jerky. The fluidity between puppet movements is so poor, I even longed for the sketchy continuity of a children’s flip book. But the clunky, sometimes ridiculous animation makes the film that much funnier. If the movie had been gussied up with computer graphics, I can guarantee some of the novelty and personality would be launched into an abyss of no return. The sprite and kitschy animation is so archaic, so weathered, that the whole film is unique in its old world execution. Helping the dodgy puppetry is a crew of understated vocal talent. Whereas some children’s animated features – not saying that this particular film is a children’s feature – cast the most gregarious, wacky personalities in media to portray portly pandas and winsome fish, Anderson finds the most subdued actors he can squeeze into a booth to flesh out his picture. Listening to George Clooney’s unaffected voice ramble on while his character wobbles around in skittish stop-motion is hilarious. When you tie in the lazy vocals of Bill Murray; the warm sound of Meryl Streep; and the cranky offerings of Jason Schwartzman, you understand what type of palpable chemistry the movie has.

I don’t necessary think, for one moment, that “The Fantastic Mr. Fox” is a children’s movie. And when I say the film isn’t kids friendly, I don’t mean its violent, sexually explicit, or any of that nonsense. I only mean that the flat, dry sense of humor may bore the younger crowds. Anderson’s films, in essence, are loaded with adult friendly quips, relying on ridiculous verbal exchanges and awkward character interactions to fill in the pages of dialogue. The animals, no matter how full of whimsy they may seem to be, behave like stilted grown ups dealing with marital problems – this type of material may not be suited for children who want to play PSP and eat Gogurt – but for those of us who like our humor with a subtle wink, “The Fantastic Mr. Fox” is a proper offering.

For whatever its worth, this is George Clooney’s best voice work since he portrayed a homosexual dog in a South Park episode. Wes Anderson has truly crafted a bizarre, exquisite little film with some of the best scenes of poisoned blueberries in cinematic history. Go watch it, be prepared to rejoice over the strange workings of Roald Dahl’s memorizing world, and pay close attention to the excellent, frenetic score.