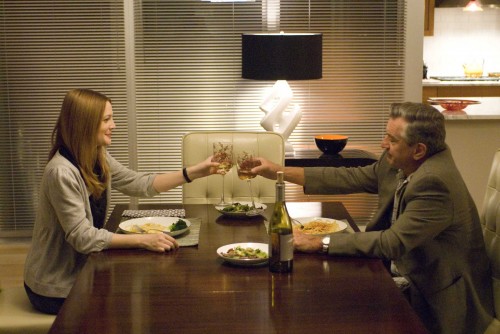 Robert DeNiro stutter-steps around the fruited plains, looking mawkish and fatigued, while visiting his children on the cusp of the holiday season. None of his kids are not prepped for this impromptu visit, however, and end up shoving their old man out of the door with swift abandon. The commercials for this supposed family comedy are shamefully inaccurate, as the movie has as much humor as an Alaskan oil spill. Nonetheless, the trailers proceed to bop ever so buoyantly to Stevie Wonder’s “Signed, Sealed, Delivered I’m Yours”, completely truncating the idea of the “Everybody’s Fine” being a stinger of a drama. The critics in the theater, after the screening, dipped their heads in total anguish at the unabridged amount of depression that ruled over director Kirk Jones’ bullish attempt at moviemaking.

The cast of the movie – which includes some major-to-minor marquee stars – stand around, idly, seeming more like a cardboard cutouts than actual people. Did Kirk Jones superimpose Sam Rockwell into his film with the unaccredited help of LucasArts? I should hope so, or else I’m worried about Rockwell’s superfluous performance and bizarre choice in movie roles. I would accept, whole heartedly, the giddy bouquet of giggles and scrunch-nosed antics from Drew Barrymore, but not from her co-stars.  I suppose I cannot blame Kate Beckinsale for her mundane performance – she didn’t offend me as much as she did with her breathy accent in the bloated “Van Helsing” – but she did act preposterously huffy and repetitiously insipid throughout the entire film. I’m pretty sure the director could’ve cast a teakettle that would’ve given off more realistic steam.  These actors and actresses, who portray DeNiro’s children, are wooden and stagnant. The actual characters are forlorn and indecisive about their path to happiness, afraid of their father’s judgment, and full of forced happiness. DeNiro proposes that they all muscle up and come together as a family. By the time the old badger packs up and hits the dusty road – it happens early on – we are already being put to sleep by a script that packs the excitement of a Xanax.

So maybe I’m roping up the entire cast of “Everybody’s Fine”, throwing them overboard, then watching them drown – the poster did a more respectable job of that, but I digress. Most upsetting about the sour candor of this film is the way it deals with emotional trauma; with family ills. Instead of thoughtfully addressing issues such as drug abuse and infidelity, the movie believes that a group hug, full of pixie dust and tightly wound bows, will fix each problematic situation. Last year’s “Nothing Like the Holidays” took the same snow-ploughed route by curing serious ailments with time friendly solutions. The sitcom archetype is scribbled all over Jones’ flimsy screenplay, making me believe that the director watched a succession of “Family Matters” episodes before musing about his seasonal drama.

Some say, perhaps by default, that DeNiro gives one of the most stunning performances. If this means moping around, arching an eyebrow, and making a dissatisfied expression – then I guess he is the best actor at looking despondent. DeNiro sleepwalks through “Everybody’s Fine”, muttering lines that drolly limp from his lips. Do we have to celebrate this kind of performance? One of our greatest actors needs to be reinvigorated by a decent story, a fine script. I’m tired of watching him behave like a pile of sawdust.

I suppose if you wanted to initiate a state of elongated depression, you could shell out ten bucks to feel miserable at the movie theaters. I only warn you that a cavalcade of awful things transpire, to nearly all of the characters, before the thing is said and done. I will also make a footnote to say that some of this movie is so pedestrian and ridiculous that it is laughable at seemingly inappropriate times. And if you ever wondered what the chemistry between Drew Barrymore and Robert DeNiro is like, it’s pretty hateful.