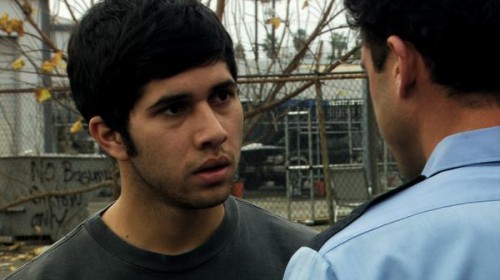 Months after its intended release date, Emilio is finally coming out. I can only assume that this delay is a result of the lackluster reviews the film received from critics who attended the initial screenings. It seems that most reviewers had some strong perceptual sway upon leaving the theater and held no bars when expressing their distaste for this movie. The film, therefore, was held back until maybe everyone could forget what they had heard about it.

In reality, however, Emilio is inoffensive, watchable, and even mildly interesting. I would give more credit to the socially-conscious subject matter if it weren’t for movies like The Visitor (2007) and Sugar (2008), which cover essentially the same topics and are also better. Overall, though, Emilio makes a point, and presents it by way of a well-paced story.

Basically, at its core, Emilio reveals a picture of the difficulties immigrants face in obtaining justice and fair treatment in America. When the title character, played by Walter Perez, discovers that his little sister has essentially been kidnapped from his hometown in Mexico, he embarks on a trip to Los Angeles to find her. The kidnapper is a corrupt business man who transports drugs and young girls to the United States. After obtaining someone else’s identification, Emilio makes it across the border, only to be met by a convoluted bureaucratic system run by aloof and callous strangers who offer him no help. Eventually, Emilio meets other Spanish-speaking immigrants who offer him a community in which to succeed within the confines of the American social system.

Emilio’s new social network tries to help him create a life in America, but Emilio’s only concern is finding his sister. Because of his single-mindedness, he ends up sabotaging himself repeatedly, in episodes which account for a rather frustrating majority of the movie. These human mistakes and moral struggles aren’t glaring enough to ruin the film, however. Emilio’s decisions serve only to guide him in different directions, on an essentially directionless search for his sister.

The police, the American world of small business, immigration workers, and the judicial system all fail Emilio, but this is really no surprise. As members of American society, viewers of this film who aren’t completely sequestered from the outside world would already have an acute understanding of the numerous dead ends and disappointments involved in all aspects of the legal system and the movie would only serve to point out the rather obvious fact of how much harder things are for non-citizens. Thus, as social commentary, this movie is superfluous for the type of audience that would be watching an independent, foreign-language film in the United States anyway.

All things considered, however, the discrepancies between the most basic aspects of Emilio’s life in the U.S. and the daily life of an American citizen are interesting to look at, if only to emphasize the dishonesty and disregard that someone unfamiliar with the social map of this country can be faced with. Also, Emilio’s search for his sister and her kidnapper can, at times, take on the edge of some type of Hitchcockian man versus the world crime mystery. I might be granting the film more credit than necessary and I’ll concede to wanting to balance the scales in the wake of all that horrible buzz a few months ago. To be completely honest, though, Emilio might not be on anyone’s list to win awards or be considered one of the best releases of the year, but it’s certainly not a waste of time.

Emilio delivers about what it looks like it would deliver. Filmed on what seems like a cheap camera, and sometimes looking like a video someone took on their cell phone, this movie isn’t going to offer any of the fast thrills and high-quality effects of a big budget release. The storyline isn’t really conducive to the visceral stimulation or hyperactive fact-crunching that some viewers rely on for enjoyment. But if you’re looking to go see a movie and you didn’t have anything specific in mind, you might as well see Emilio. It’s not something I would buy after seeing it in theaters, or even rent to share with someone else, but it’s far from the type of disaster that would justify someone stomping out of the auditorium, incensed and cursing with indignation.