Forgive Its Name: It’s Not that Bad 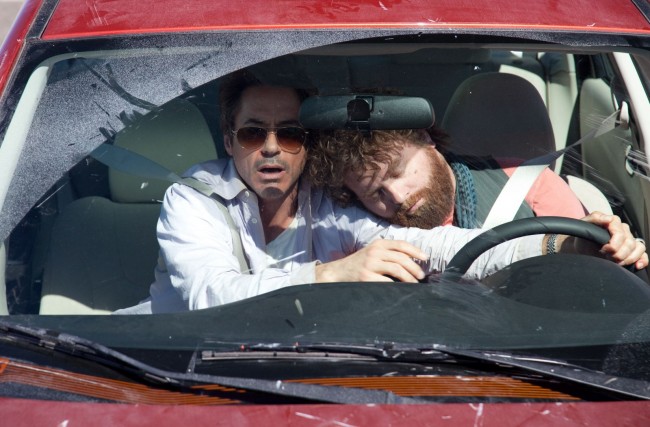 The road trip movie. There’s probably a section for this genre in video rental stores at this point. Covers with daffy characters flushed with tepid smiles or puffed up hair, often with clothes in a disarray and some sort of vehicle in the background. I think everyone has a repressed desire to have a string of disastrous encounters en route to a particular destination. Maybe not in the mundane fashion of blowing out a tire on the I-5, but more along the lines of randomly having an alligator in a prom dress fall out of a helicopter and onto your car (sorry if I unknowingly ruined the surprise of something that may actually happen in “The Hangover 2”).  Speaking of “The Hangover”, fans eagerly awaiting the next installment of the series will be overjoyed to find its director, Todd Phillips at the helm of another wacky buddy romp (there’s that critic word) in “Due Date”. I hate the title of this movie, I’ll be the first to admit, because it gives me the impression that I’m about to watch a romantic comedy with Jennifer Lopez from 1998.

In “Due Date” Phillips hasn’t exactly broken chalk while explaining a difficult theorem. The guy simply put together three things that make money: Robert Downey Jr, the road trip comedy, and Zach Galifianakis’ beard. There are even a few cues taken from “The Hangover”. Instead of a whimpering baby, Galifianakis has a cow-eyed dog attached to him. The same sort of animated carnage ensues during the trip, with the arboreal-looking Galifianakis causing most of it, as his eyes well up like a rain gutter during a thunderstorm. “Due Date” is almost like a collection of unused ideas from “The Hangover”.

The movie is about two strangers (played by Downey and Galifianakis) who meet each other at an airport, are forced into a road trip with one another due to unforeseen circumstances, and end up annoying one another for the duration of the film. Downey plays the hot kettle, a guy who straightens his tie to the point of choking . While Galifianakis plays it loose, his fuzzy-maw and unkempt hair indicative of his Tasmanian devil-like persona. The two butt-heads, hurt each others feelings, and eat a lot of Bugles snack chips (there is so much product endorsement in this film I felt like I was watching a Superbowl commercial). Because the wife of Downey’s character is expecting a baby at any time, he is depending on the newly acquainted buzz-saw that is driving him. There are some genuinely funny bits in this, that revolve mostly around mean spirited gut-punching and Looney Tunes violence, that are relatively breezy and amusing.

Galifianakis’ character in this film , though good-natured and flippant, should be in a straight-jacket somewhere. He behaves as if he was one of the Joker’s henchmen, who was too nice to concede to the Gotham native’s nefarious plans, and instead bobs around the streets smirking and knocking over vases. There’s no way, realistically, that this person could exist in real life without assistance. Working autonomously? I don’t think so. Another character that showed up in a movie earlier this year, with the same personality, was that of Steve Carrell’s character “Barry” in “Dinner for Schmucks”. I guess a goofy protagonist, whose tongue hangs out like a ribbon over a poorly wrapped gift box, is what people want to see. Vacuous, vapid, non-varying!

I liked “Due Date” enough to recommend it to theater goers, even though it duplicates the airplane scene from “Anger Management”. I’m not so sure that’s the movie that you want to pluck scenes from, since audiences thought that it was about as funny as the Zapruder film, but there you have it. There are also close ups of a canine’s reactions, whenever something outrageous happens, that borders on what “Old Dogs” did. Again, is that a film you want to borrow from? With all of my problems with the film, “Due Date” is still admirably aloof and seldom unentertaining. I find myself quoting fellow Cinema Spartan critic Colleen Dillon when I say: “That movie looks like a terrible version of ‘Planes, Trains and Automobiles’.” Not sure what audiences will think, but it gets a lukewarm passing grade from me.