Cry Havoc Delivers a Monster of a First Issue

Let me start by saying that I am well aware of the fact that I am supposed to review comics.  My throngs of fans are likely all glued to this site foaming at the mouth, constantly hitting refresh, in unrestrained anticipation of my next offering, and who could blame you?  Well, if I’m being totally honest, Cry Havoc is not a comic, my friends.  No, it is an artistic showcase.  While on the very surface it is an enjoyable read, and visually fun to look at, this is no Michael Bay popcorn movie of a book. Cry Havoc is an extremely decisive and deliberately crafted work worthy of multiple reads.  Almost every detail, down to the color pallets used, layout of the pages, and names of the characters are deliberate choices made for a specific reason beyond just looking cool or moving the story forward.  Cry Havoc tells the story of Lou, a girl from London who suffers a violent and seemingly fatal run in with a supernatural wolf-like creature, only to wake up a few hours later unharmed.  Not long thereafter she begins changing into something no longer entirely human.  As she starts to become aware of her new abilities, a growing struggle builds within her between her desire to remain in control and the intoxicating allure of giving in to these abilities, a struggle made all the more difficult when she finds herself a member of a mercenary group made up of other unique individuals that want to use her for her abilities in an exchange for helping her get rid of them.  It is within that strife that we find a central theme to this book: the personal struggle with one’s inner beast, and the isolation you can feel when it seems like nobody else truly understands what you’re going through. 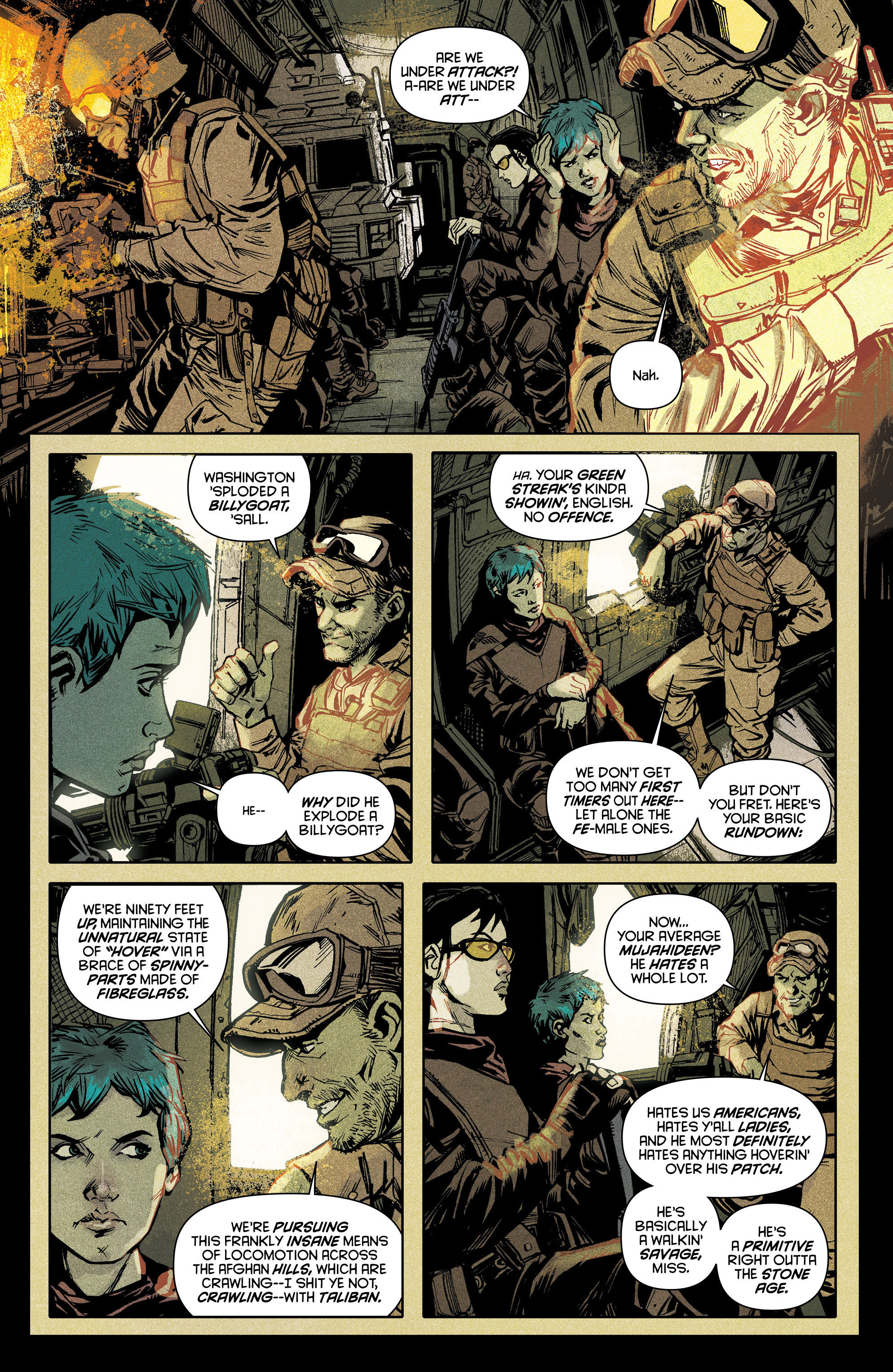 If you are any kind of avid comic reader, one of the first things you are likely to notice (aside from a very cool looking cover) is the listing of what seems like an unreasonably large creative team (seven credits where you would usually find around two to four).  You may be surprised to find out that this was not a case of timing conflict or being behind schedule, causing pages and tasks to be outsourced to numerous other people in an attempt to make a deadline, but rather this was a distinct choice made to showcase specific elements and themes within the story.  Doing so also showcases talent that can sometimes be overlooked and taken for granted in other comics. There are three colorists, a writer, artist, designer, and letterer.  Despite such a long list of names, everyone’s presence can be felt within the pages, and each has their own impact.  The overall design and layout of the book are wonderful.  There is great care taken in details even as subtle as panel structure between timelines that really help give this book a uniqueness that is hard not to appreciate.

The story jumps around between three distinct sections in time of Lou’s story.  This allows the colorists to really highlight just how important a colorist can be in affecting the tone and feel of an artist’s work.  They almost make the different sections feel as though they could be done by different artists, and the colors masterfully accentuate what Lou is going through and how the situation differs from one point to the next.  Ryan Kelly’s art is terrifically suited to the story being told as well.  His visual storytelling skills and style mesh perfectly with the narrative.  His energetic art has a slight amount of edge and grit that lends itself well to the violent and supernatural world of monsters and mercenaries.  That’s not to say this book is all visuals either: the large artistic team, potent and effective in their execution though they may be, do not detract from or outshine the person who provides the bones on which this beast is built. 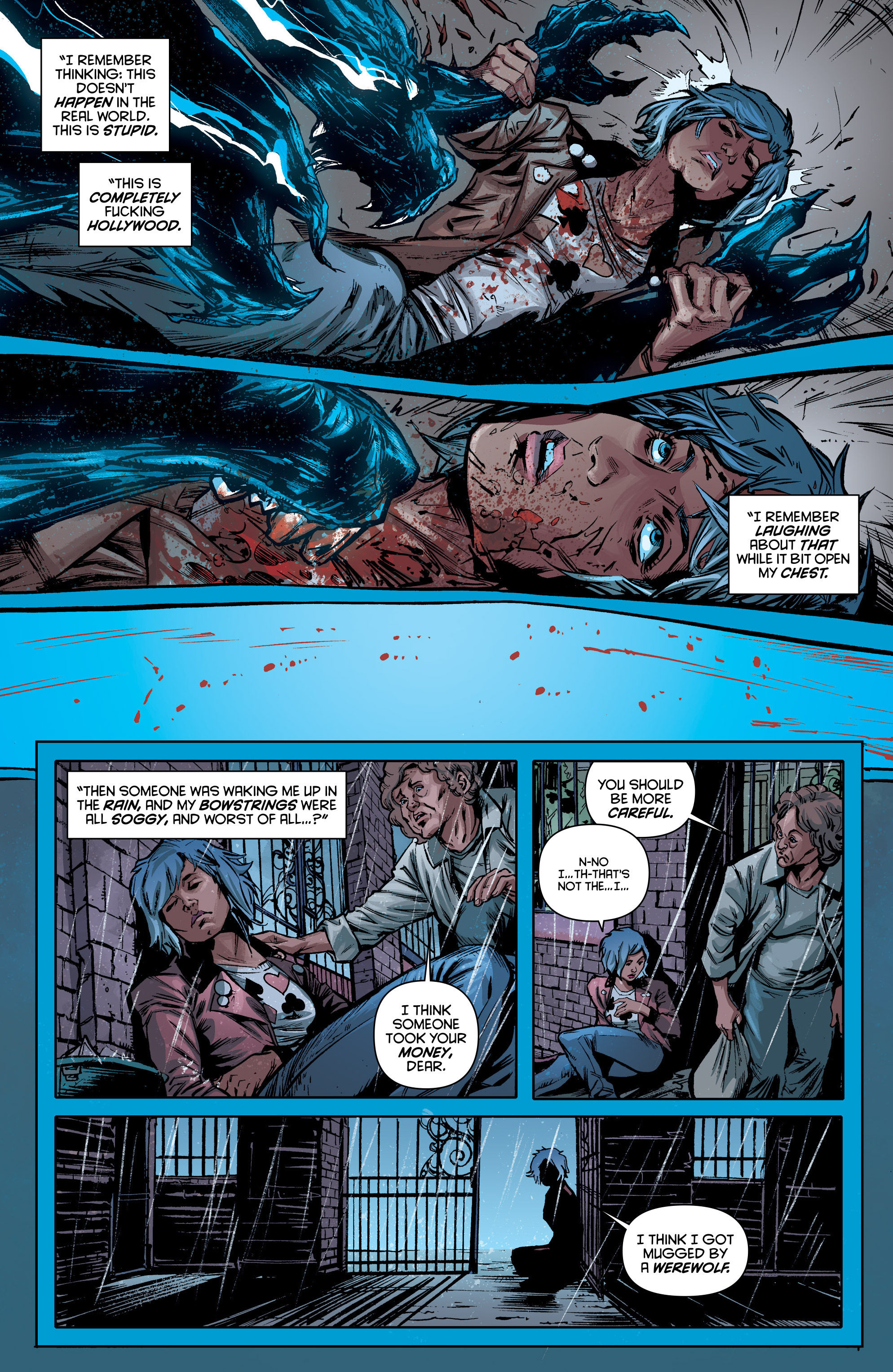 Simon Spurrier’s writing in this book is very strong.  The story is well paced, and the dialogue feels very true and natural to the characters.  He leaves you hanging with enough mystery to want to keep reading, but gives you enough story and information that you don’t feel cheated.  One of the absolute character based highlights of his writing is his treatment of homosexuals in the story.  They are in the story, but they are not here as a gimmick or a story defining element.  They are simply here because they exist in the real world, so why wouldn’t they exist in this one?  You get the sense that the writer doesn’t feel the need to have a reason for a character to be gay, some people just are.  There is no more effort seen here to remind us of a characters orientation than you would see from a writer going out of his way to remind us Peter Parker is straight, they are just treated as people.  The lack of commentary is in itself a commentary.  It is essentially saying that it shouldn’t be some special achievement to shoehorn an LGBT character into your story.  They are no different from any other person and can integrate seamlessly into the world you are creating without having to define it or have their orientation be the focus of it.

Cry Havoc turned in a stellar first issue, well worthy of your attention.  There is even a very informative and interesting “Annotations” section in the back, with a page by page breakdown of some highlights you may have missed on your first read through.  It has a uniquely large creative team that was firing on all cylinders, which in turn created something that was itself thoroughly unique and enjoyable.  I would highly recommend giving the first issue a look if you haven’t already. Whether you are a hard core comic enthusiast or just passively indulge, this is an enjoyable read.